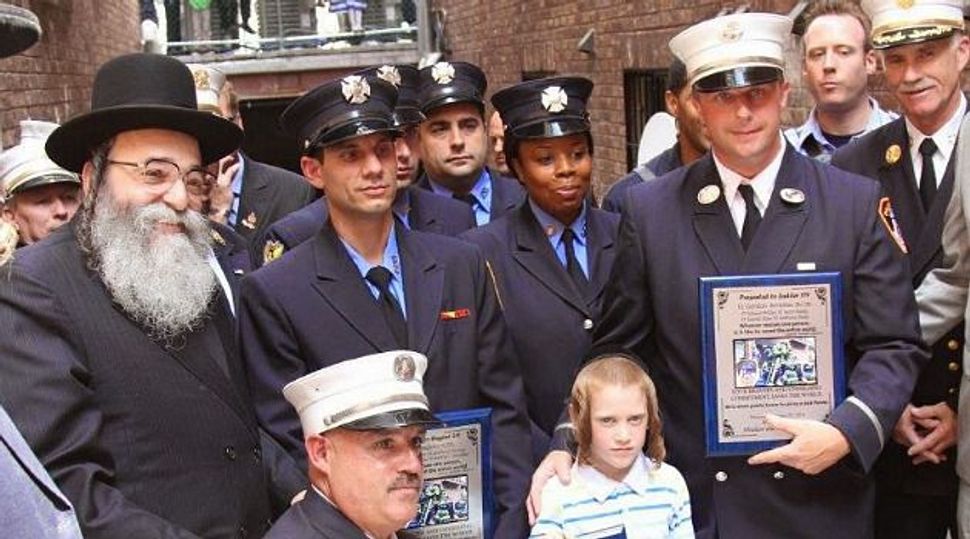 A New York City firefighter killed in a weekend blaze earned accolades in the Satmar Hasidic community for saving a 7-year-old boy’s life just weeks before his tragic death in a Brooklyn public housing high-rise.

Lt. Gordon “Matt” Ambelas was among the firefighters who rescued Mendy Gotlieb after the Satmar boy’s head and arm were caught in the electric roll-up gate of a parking garage in May.

The 40-year-old lieutenant, who was honored for his efforts in a June 26 ceremony, died after sustaining multiple injuries while searching for victims in a July 5 electrical fire in Williamsburg.

The boy’s family said in a statement that they were “shocked and devastated” by the death of Ambelas, whom they called “the savior of our child Mendy.”

“He literally sacrificed his life for others,” they added. “[We] hope that his family finds solace in the so many lives that are living on because of him.”

During the June 26 ceremony, Mendy and his parents thanked Ambelas in person and presented him and his fellow firefighters with a plaque.

Mendy spent 15 minutes suspended from the metal gate after it activated while he played with friends. Firefighters quickly freed the boy by prying apart the metal with airbags and a hydraulic rescue tool.

“[This incident] shows that FDNY members are always ready to help others,” Ambelas said at the ceremony. “It was great teamwork all around.”

Rabbi David Niederman, the the head of UJO of Williamsburg, a prominent Satmar-run social service agency, said he was “deeply saddened” by Ambelas’ death. “[His] memory will live on in Mendy and the many others he saved, and of course in the precious family he’s leaving behind,” Niederman said in a statement.

Investigators believe that the fire that took Ambelas’s life began in an air conditioner electrical cord that was pinched between a wall and a bed frame.

He is the first New York City firefighter to die in the line of duty since April 2012.