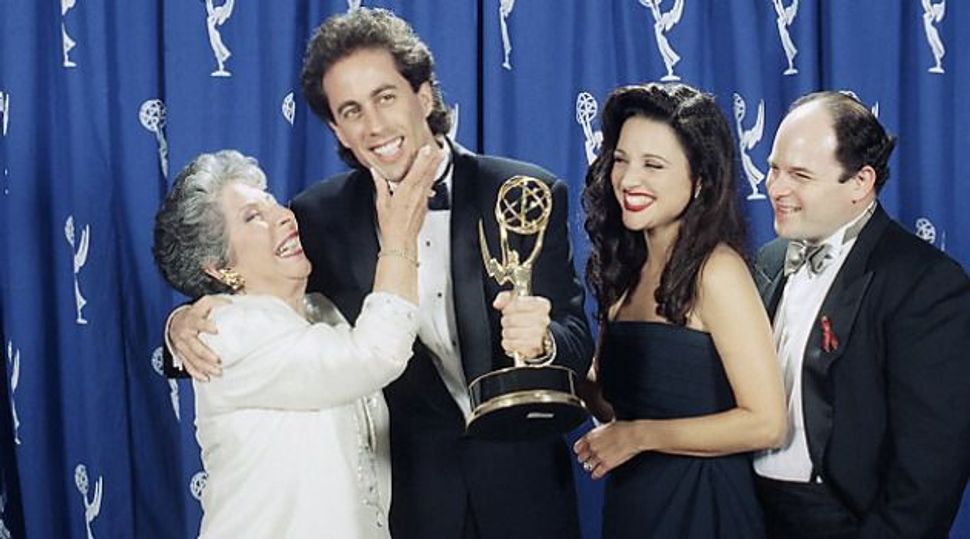 That’s the takeaway from a new study by the Pew Research Center, which asked Americans to rate various religious groups on a “feeling thermometer,” where 0 is coldest and 100 is warmest. Jews earned an average score of 63 “degrees,” the highest of any religious group that appeared in the survey.

The survey technically shows Catholics and Evangelicals in a statistical tie with Jews, at 61 and 62 respectively. But these religious groups, the country’s largest, benefit from a boost in popularity from their own members; people tend to rate their own religious group higher than others, according to the study. When Pew excluded respondents’ opinions about their own religions, Catholics dropped to 58 and Evangelicals to a cool 52.

“This may be surprising to Jews, but it turns out that Jews are the best liked religious group in America, when people are asked to rate all the major [religious] groups other than their own,” said Alan Cooperman, Pew’s director of religion research.

Evangelicals show a particularly high regard for Jews. White Evangelical Protestants gave Jews a score of 69, the warmest score any group gave Jews with the exception of Jews themselves.

But the feeling isn’t mutual. Evangelicals rated at the bottom of Jews’ lists, only netting a 34.

“There are some unrequited feelings here,” Cooperman said. “White Evangelicals give really quite warm ratings to Jews…but Jews give Evangelicals quite chilly ratings.”

He ascribes Evangelical’s love for Jews to their serious reading of the Bible. “You cannot read the Hebrew Scripture without encountering the idea that there’s a very strong covenant between God and the Jewish people,” Cooperman said. “I think that’s probably an important reason why Evangelicals have such warm feelings for Jews.”

But it’s not just Evangelicals that love members of the tribe. The rest of America has taken a liking to Jews. This is all the more surprising since anti-Semitism was widespread in the U.S. only a couple of generations ago.

Cooperman was reluctant to offer an explanation for America’s fondness for Jews, preferring to let the data speak for itself. But he acknowledged that Jews are now viewed as “successful, funny, and smart.”

He also theorized that the Christians’ changing theological approach to Jews may explain the survey’s findings.

“Just a few generations ago, many Christians were taught that Jews rejected Jesus and even that Jews killed Jesus,” he said. “ Today, you’ll find that the overall teaching that Christians are taught about Jews is that Jesus was a Jew. That encapsulates a tremendous change in American society over the course of the twentieth century, no doubt impacted in significant ways by the Holocaust.”

Atheists and Muslims fared most poorly in the survey, earning only a chilly 41 and 40, respectively. But Jews were noticeably fond of non-believers, giving them a 55.

“That’s the highest rating that atheists get from any religious group other than agnostics and atheists themselves,” Cooperman noted.

When it comes to Muslims, however, Jews are in agreement with the rest of America. Jews rated Muslims at 35, statistically tied for last place with Evangelicals, a finding that could be driven by the tensions of the Israeli-Palestinian conflict.

Cooperman noted, however, that in last year’s much-heralded Pew Survey of U.S. Jews, 72% of Jews reported feeling that Muslims experience a great deal of discrimination in America.

The survey also found that people feel more warmly towards religious groups whom they’ve encountered before. Among the roughly 1 in 4 Americans who say they do not know a Jew, Jews received a 55, while the rest of America gave Jews the much higher score of 69.

Only 10% of Americans reported positively chilly feelings towards Jews, but it’s hard to say if that means 10% of Americans hold anti-Semitic views. Cooperman emphasized that the thermometer question is designed to test the warmth of people’s feelings, but doesn’t include words like “hate” or “love.”

“These are very difficult things to measure,” Cooperman said. “This is not the only possible or best possible way to measure [anti-Semitism]. A chilly rating doesn’t necessarily mean they hate Jews.”