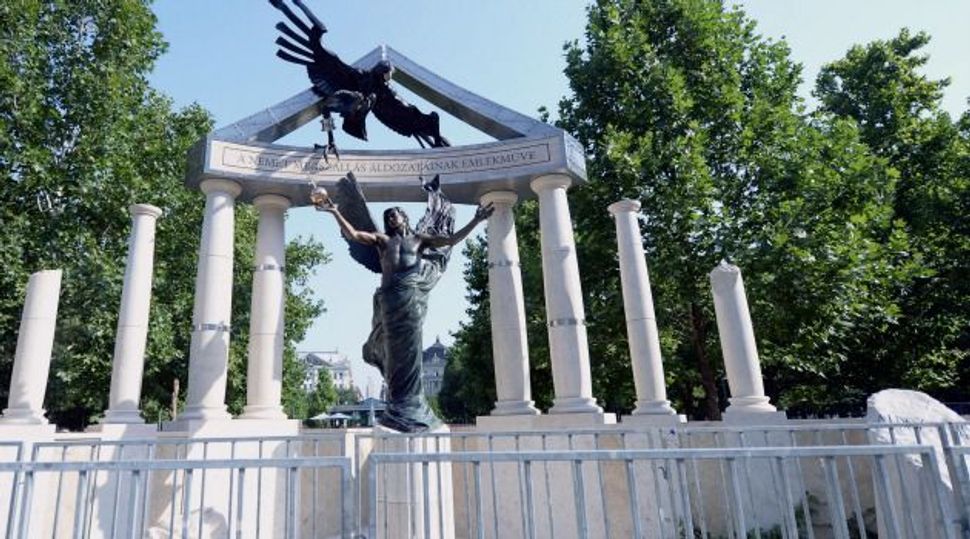 A controversial Nazi occupation monument was erected in downtown Budapest in the middle of the night after an appeals court rejected a petition to halt its construction.

Workers completed the main components of the memorial in Freedom Square after midnight Sunday following the decision by the Budapest Court of Appeals the previous evening, according to local reports.

Speaking Monday at a news conference in Budapest, Janos Lazar, a senior representative of the Hungarian government headed by Prime Minister Viktor Orban, said there will be no unveiling ceremony because of the controversy surrounding the monument.

Critics of the monument, which depicts Hungary as an angel being attacked by a German eagle, say it glosses over Hungary’s active role in sending some 450,000 Jews to their deaths during the Holocaust. The Hungarian government disputes the interpretation, arguing the figure attacked represents all victims of fascism and not the Hungarian state.

Orban in February postponed a ceremony commemorating the country’s victims of World War II following protests by Jewish groups over the monument that they said obfuscates Hungary’s Holocaust-era role. Following his reelection, he asserted in early May that construction would go forward despite the Jewish community’s objections.

The Mazsihisz Federation of Jewish Communities in Hungary pulled out of all government-led activities for the commemoration of the 70th anniversary of the Nazi invasion of Hungary because of the monument.

In a statement Monday, Mazshihisz wrote, “Our efforts have not been in vain: Outstanding Hungarian scientists, clergymen and philosophers have strongly criticized [the erection of the monument] which followed a hundred days of continuous protest.”

Government workers began constructing the monument in April, but work was halted after the lawsuit filed by a former leader of the Socialist Party.

The site was secured early Sunday morning by 100 police officers to allow the completion of the monument, according to local reports. Protests have continued since then at the site, according to reports.