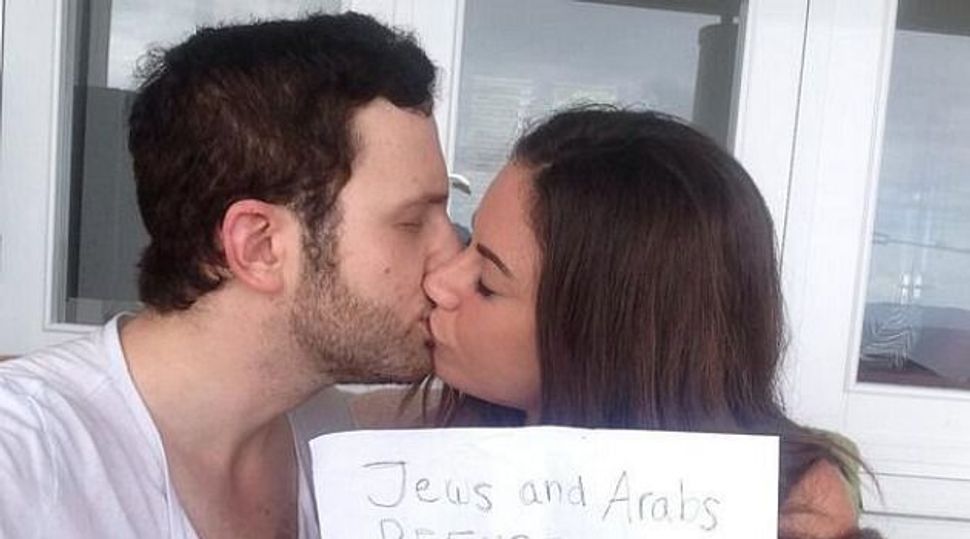 Kiss of Life: A Lebanese woman and her Orthodox boyfriend went viral on social media when they posted a photo of themselves kissing. But most mixed couples in Israel are intentionally keeping a much lower profile during wartime. Image by twitter

Fadhi Galine was born in Gaza. But he has limited interest in the latest conflict, which has seen Israel conducting airstrikes and a ground operation in the coastal enclave, generating numerous civilian casualties.

“It doesn’t interest me what happens. My life is home-work, work-home,” said Galine, a 29-year-old chef whose family moved to Israel when he was 4 and who lives in Jaffa.

Many Arab citizens of Israel have expressed outrage at Israel’s operation, but Galine says he is disconnected from current affairs, instead preferring to live in a bubble. “I have my life — it doesn’t affect me what goes on around me,” he commented.

Inside this bubble is an unusual relationship: He is a Muslim Arab living in Israel, married to a Jewish woman. When the Forward interviewed him, he had just broken the day’s fast for Ramadan — a fast that his wife, Talya Segal, a 29-year-old shop worker, sometimes observes, even though she still goes to synagogue on Yom Kippur.

Segal said that she and her husband “think the same” about the Israel-Hamas conflict. They both believe that “it’s a shame that they go to war.” Current events aren’t causing any tensions at home, she said. But when asked about where responsibility lies for harm to Gaza civilians, Galine and Segal respond differently.

Galine is philosophical about the deaths in Gaza “Of course it hurts, but it’s war,” he said. He refuses to be drawn into the question of who bears responsibility for harm to civilians, Hamas or Israel. “What happens doesn’t interest me regarding whether it’s one side or the other side,” he said.

Segal’s views reflect the Israeli Jewish mainstream. It is “Hamas’s fault,” she said, that civilians are dying. “I don’t think that Israel needs to share the blame.”

She added. “I think that from one point of view it is a shame they go to war, but on the other hand they need to fight against Hamas.”

Segal stressed that she meant “only against Hamas,” not the Palestinian people.

Arab-Jewish marriages remain rare in Israel, and the social pressures on them from a society that emphasizes ethnic solidarity within and among its various groups are considerable. Amid the increased tensions generated during wartime it was not surprising that many mixed couples declined requests to be interviewed by the Forward. Nor that those who agreed seemed most of all to want to build a protective bubble around their families that would keep those pressures out.

Galine and Segal met in Jaffa and married — abroad, as there is no marriage for mixed-faith couples in Israel — nine years ago. In Israel, they have also registered a “domestic union,” which is legally recognized by the government, through the not-for-profit group New Family. He grew up in Jaffa, which has large Arab and Jewish populations, and she grew up in the neighboring, predominantly Jewish Tel Aviv.

The couple are reticent when asked for details about the history and nature of their relationship in a society where ethnic solidarity is a powerful social reality. Originally, Segal’s older sister was against the relationship, Segal related. “She tried to stop it, but it didn’t help,” she said. Other members of their family accepted the relationship, and the sister no longer presses her opposition, Segal said.

Natalie Solonsav’s thoughts on the Gaza conflict are less clear than Segal’s, and understandably so: She has lived in Israel for only three years, having immigrated to Israel from Russia under the Law of Return, which gives anyone with at least one Jewish grandparent a right to live in Israel and obtain citizenship quickly. Her father is Jewish, and she considers herself Jewish. But for the past year and a half she has been in a relationship with an Arab man, Husam Solonsav, and in June they formalized their relationship via New Family.

“It’s a very difficult question,” 33-year-old Natalie Solonsav said when asked if the Gaza operation is justified. “I can’t say yes and I can’t say no. I understand why [it was ordered by Israel], but at the same time I don’t understand.”

The Solonsavs live in the predominantly Jewish and heavily Russian city of Netanya, and say that their families have accepted their union. “We love each other, and it’s a serious decision,” Natalie Solonsav said of their New Family registration.

Do Natalie and Husam talk to each other about the Israel-Hamas confrontation? “Not a lot, because I personally am not very political. But of course we talk. You can’t not talk about it if you live here,” she said.

Like Galine, Natalie Solonsav is uninterested in the question of who is responsible for the civilian deaths in Gaza. “I’m a living person, and I’m sad for the people on both sides. It doesn’t depend on who’s right and who’s not right.”

Husam Solonsav, 31, echoes Galine’s desire to create a family bubble against tensions over Gaza. “We’re a happy family and don’t get involved in politics,” he explained, saying of the conflict: “It doesn’t really matter to me. What is important to me is family.”