German Paper Speaks Out Against Anti-Semitism 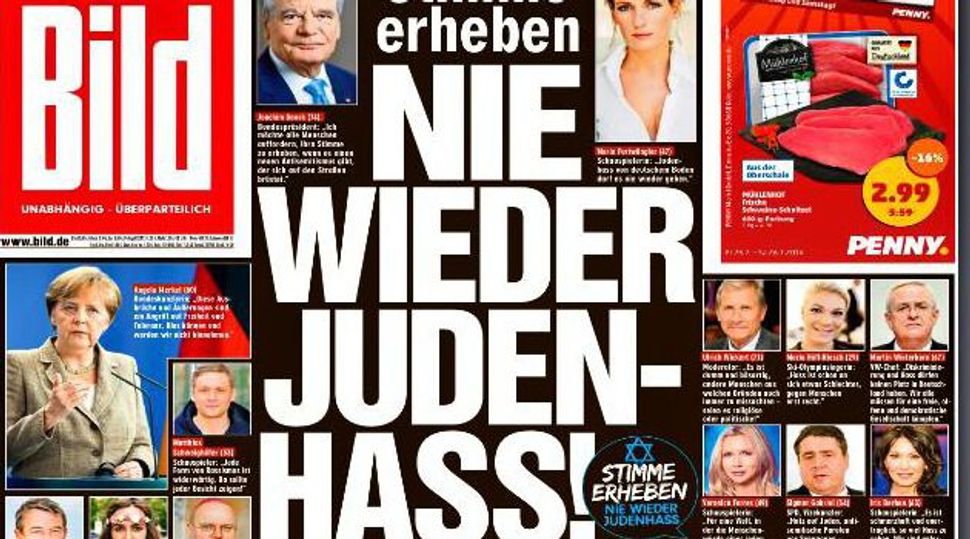 The paper’s late owner, Axel Springer, was a friend of Jews and a strong supporter of Israel.

The newspaper’s statement is a repudiation of the rash of recent anti-Semitism in German demonstrations against Israel’s Gaza war, Bild editor Kai Dieckmann, said. He added that the newspaper’s journalists feel a special obligation to Israel.

“We as Germans take the lessons and the responsibility of the Holocaust seriously and we will always be on the side of Israel when its existence is threatened.”

Dieckmann says critics of Israel should voice their opinion in front of the Israeli Embassy and not in front of synagogues. “Those who do this are pure anti-Semites, and there should be no place for them in Germany.”

Here are some of the comments in today’s Bild.

German president, Joachim Gauck: “I want to call on all people to raise their voices when there is new anti-Semitism in the streets.”

Chancellor Angela Merkel: “These outbursts and utterances are an attack on freedom and tolerance. We cannot and will not tolerate this.”

Turkey’s ambassador, Huseyin A. Karslioglu: “Solidarity with the suffering Palestinian population must not turn into anti-Semitism.”

Bild reports comments on its Facebook and Twitter pages “show how necessary our campaign is. “The inhumane hate that hits us, Israel, and the Jews is simply frightening. The postings on our social media pages go from rude to pictures of Adolf Hitler.”

Bild says: “Today we document their hate to make sure that the overwhelming number of Germans stand firmly and unfaltering against this hatred.”

More than 1,000 people denounced Israel today in a Berlin march to mark Al Quds Day, an annual event to voice grievances against Israel.

German Paper Speaks Out Against Anti-Semitism