End of the Road for Jumbo’s, Miami Soul Food Joint That Battled Segregation 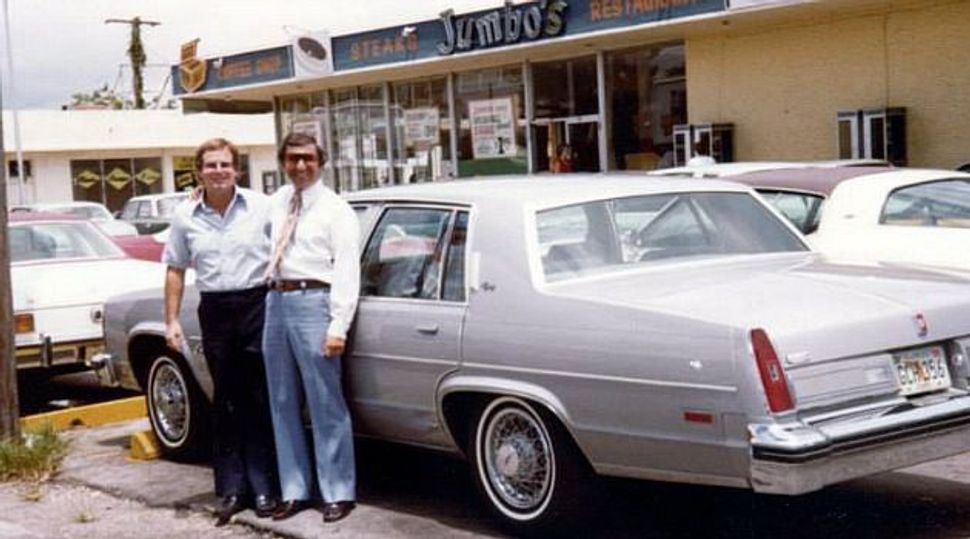 They Did Right Thing: The Jewish owners of Jumbo’s pose outside the soul food spot in North Miami during its heyday. Image by courtesy of jumbos

The line went out the door and around the building when Jumbo’s, an iconic soul food joint in Miami’s downtrodden Liberty City, closed in July.

But many of the customers who came for a final taste of the James Beard Award-winning restaurant’s signature fried shrimp, fried conch, pigeon peas or collard greens had no idea they were celebrating the last day of an institution that shone like a beacon at a time before Miami was the Havana of the North, when it was still a bastion of Southern segregation.

For unbeknown to many of its younger customers, Jumbo’s is as important a symbol of the civil rights movement in South Florida as Herren’s Restaurant, in Atlanta; Helma’s, in Knoxville, Tennessee, or the Manhattan Cafe in San Antonio. It was the first in Miami to integrate its staff and let blacks sit in the dining room.

It was 1967, three years after the Civil Rights Act outlawed discrimination in public places, a law apparently ignored in Miami.

“It was a business decision and a moral decision,” said Bobby Flam, 69, whose Jewish family owned Jumbo’s for 59 years, and who ultimately became the only white business owner to stay in Liberty City after riots erupted in 1980. “I didn’t realize at that time it was such a big deal.”

To anyone older than 60, Martin Luther King Jr. was a real person. Seniors remember seeing him speak contemporaneously and recall the immediacy of live television images showing a man rallying throngs of blacks and whites against the dogs and fire hoses of the segregated South.

To anyone younger than 50, King is a question on a history test, or an excuse for a holiday in January.

The same logic applies to Jumbo’s — open 24 hours a day, 365 days a year and once the choice place to go in the black community after the theaters let out and the clubs closed. It was where folks came for late-night snacks, where teens ordered burgers and fries or BLTs in combinations named for local high schools like Northwestern or Miami-Edison or Booker T. Washington. It was where folks dressed in their Sunday finery came for lunch after church.

The Flam family bought Jumbo’s in 1955, when Isadore and his wife, Sara, moved south to Miami Beach from Gibsonia, Pennsylvania, about 20 miles north of Pittsburgh, where Isadore owned a general store and the Flam family were the only Jews for miles around. (The restaurant had originally been named Jumbo Frank’s after a portly previous owner.)

By 1966 Liberty City was transitioning from a white, working-class community to a predominantly black neighborhood, and Bobby Flam, then 21, started thinking of integrating shortly after he took over the business.

The whites who worked at nearby industrial wholesalers and warehouses would come for lunch, but the dinner and overnight trade hardly existed, and Flam knew he had to do something to keep his restaurant alive.

“I told my father that if I keep this business, we’re going to have to integrate,” said Flam, who remembers the vaguely anti-Semitic comments made by patrons at his father’s store. “Maybe I knew what it feels like.”

Flam hired three black people to work in the dining room; some two dozen white employees quit a few days later. Shortly thereafter, he closed the back window where blacks had been served, and told the back window patrons to come inside. Many, perhaps most, of his white patrons found other places to eat.

Flam says black customers were initially reluctant to come up front. But one longtime customer said it was no big deal.

“We knew what the front was like. We came to the front and just sat down,” said Lawrence Drayton, 77, who’s lived in Liberty City for 52 years and showed up daily for breakfast with friends in a corner booth.

“When my brother was out of work, he fed him and clothed him and gave him a job; when he went to jail, he bailed him out,” she said.

Twenty-year-old Riquille McCloud, on the other hand, doesn’t know anything about Jumbo’s place in Miami’s civil rights history, only that she was a child when her mother first brought her to the restaurant.

“I’m leaving a lot of memories behind,” she said. “Good memories.”

But it was during a three-day race riot in 1980 that Jumbo’s place in the community stood out most clearly.

The neighborhood erupted on May 17 after three Miami police offers were acquitted in the beating death of Arthur McDuffie, a motorcycle-riding insurance broker who had allegedly led the officers on a high-speed chase the previous December. The officers purportedly beat the African-American motorcyclist to death, then ran over the bike to make it seem like he had crashed.

Three days, 18 deaths and $100 million in damage later, a miles-long swath of businesses around Jumbo’s was burned to the ground.

Mamon Tisdol, who worked there at the time, explained how he and two other employees remained at the restaurant to make sure rioters stayed away.

“I stayed here for 72 hours. We fed the police, the National Guard and a few customers,” he said. “People called and said, ‘We’re going to burn the place down.’ I said, ‘I’ve got a gun, and you’d better bring body bags.’ This is where I worked; I was going to protect my job.” But the beginning of the end came in 2005, when Hurricane Wilma inflicted some $460,000 in damage to the building. Flam’s insurance didn’t cover enough, and he couldn’t do all the repairs. Then, two years ago, a drunk driver crashed into the building, killing two pastors, who were regular customers, as they chatted outside.

Jumbo’s final days became the story of the day for South Florida newspapers and television stations. Even The New York Times, the BBC, Al-Jazeera and Reuters ran stories.

By the time Jumbo’s closed, its best days were decades past, its teal-colored exterior in need of a paint job, its black-and-white checkered floor and 1950s-vintage tables scarred and scuffed.

Looking around the now-empty dining room, Flam concedes how relieved he is to have sold the restaurant to a developer who plans to build a strip mall and affordable apartments on the property.

But his tone turned bittersweet as he recalled the crowds and publicity of a couple of days ago.

“Where the hell were they when I was open?” he asked. “Where were they the week before?”

End of the Road for Jumbo’s, Miami Soul Food Joint That Battled Segregation