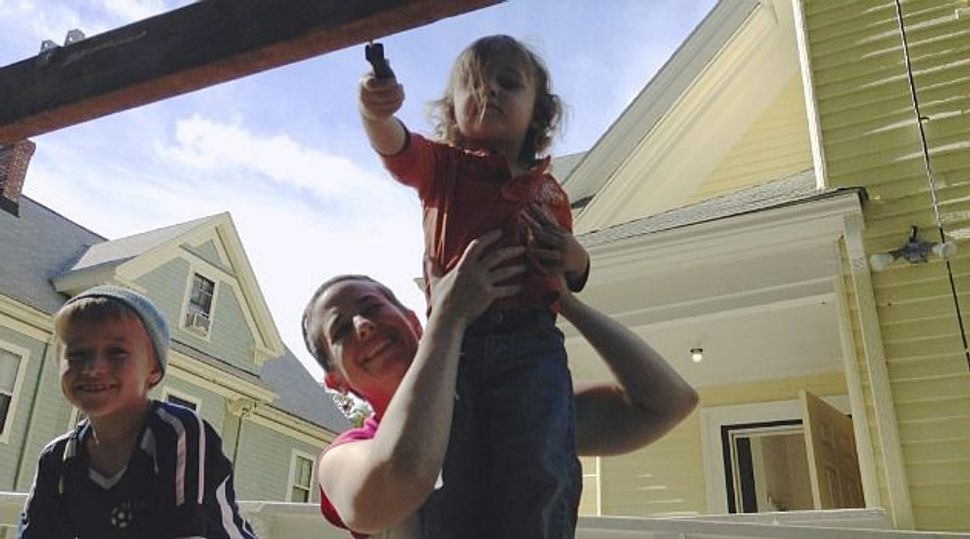 Start ‘Em Early: One of Havurat Shalom’s younger members helps out with construction of the congregation’s sukkah. Image by emily aviva kapor

From the macrame Jewish star adorning the ark and the Middle Eastern-style lamp serving as a ner tamid to the pillows on a bare floor and the sparely decorated walls, the room looks exactly as it does in a photograph from “The Jewish Catalog,” the iconic do-it-yourself Judaism guidebook published in 1973 that brought the then 5-year-old Havurat Shalom a measure of fame.

At the time, the image suggested an innovative vision of Judaism, stripped of pretense and focused on cultivating a tight-knit sense of community and direct devotional experience. Today, the room looks as if it had been preserved in amber.

But beneath the surface, Havurat Shalom has lived many lives since that picture was snapped.

Its founders have long since left, many of them moving to profoundly reshape the face of American Jewish life — infusing the wider community with the vision that animated Havurat Shalom.

“If you actually look at the people who passed through Havurat Shalom as teachers or as students, it’s absolutely amazing,” said Jonathan Sarna, a professor of American Jewish history at Brandeis University. “These were the people who would be leading figures in Jewish life in the second half of the 20th century.”

At the same time, Havurat Shalom itself has continued to evolve, sometimes in ways that have made the founders uncomfortable.

Still, when the current members gathered on a recent Shabbat morning, they came together in pursuit of the same ideals that the founders describe seeking at the very beginning — the fusion of prayer and fellowship, tradition and experimentation.

“It’s like a body,” said Aliza Arzt, a member since 1978. “All the cells are different, but it’s the same body.” With 32 current members, Havurat Shalom is small, as it has always been. But historically it wielded an outsized influence.

It is often considered a flagship of the havurah movement, which rose out of the 1960s counterculture and led to a blossoming of small, intimate prayer groups – havurot, Hebrew for fellowship. The movement’s fingerprints can be seen not only on the independent minyanim that have proliferated in recent years but in the more personal, informal style of davening that has come to pervade many congregations.

Havurat Shalom appeared in the news recently with the passing of Jewish Renewal pioneer Rabbi Zalman Schachter-Shalomi, as obituaries reported that he was one of its founders. However, although Schachter-Shalomi was present for the first year, founding members of the havurah generally agree that the primary founder was Rabbi Arthur Green, currently the rector of the nondenominational rabbinical school at Hebrew College in Newton Centre, Mass.

Green had first conceived of something like Havurat Shalom while a rabbinical student at the Jewish Theological Seminary in 1967, where he felt disillusioned with what he saw as the stiffness, lack of innovation and coldness of much of American Jewish life.

After meeting the radical Catholic priest Daniel Berrigan, Green resolved that he would create something different.

Havurot Shalom was, in fact, founded as a seminary, for one very significant reason: the draft. The Vietnam War was raging, and one of the ways to avoid the draft was to get an exemption as a student at a religious seminary.

Thus, the Havurat Shalom Community Seminary was organized in Cambridge, Mass., and Green, along with several collaborators, set about recruiting an initial class of about a dozen people. Schachter-Shalomi, an old friend of Green’s, came to teach for the first year.

Soon after, the havurah applied for a grant from the Danforth Foundation for “experiments in theological education.” It was awarded $10,000, most of which immediately went to a down payment on a wood-frame house in Somerville, a city of nearly 80,000 two miles from Boston that still serves as Havurat Shalom’s home. Four members of the havurah rented rooms there, and the teachers taught for free.

Immediately a few ground rules were established. Classes would meet weekly and would be taken seriously. Members were expected to live within walking distance of the main house, not so much for sake of not driving on Shabbat but so that members’ houses would be open to one another. There was also one communal meal per week.

One emphasis was an approach to prayer that was both experimental and intense.

“We wanted to take the deep, spiritual intensity of the Hasidic service and bring it into our kind of world,” said Barry Holtz, an early member of the havurah and now a professor of Jewish education at the Jewish Theological Seminary in New York.

Some services incorporated musical instruments or silent reflections or played records in the background.

The same spirit of experimentation extended to the curriculum.

“I remember when Michael Brooks said that he shouldn’t eat meat anymore unless he met the animal live and slaughtered it,” Green recalled, referring to the future executive director of Hillel at the University of Michigan. “Zalman brought a live chicken in and taught him how to schecht a chicken. Then there was a little hibachi somebody had in the backyard — Zalman brought it in and tried to make a sort of korban, a sacrifice of the chicken around the table. It was very strange, but it was very Zalman.”

It being the 1960s, founders also note that members experimented with drugs, ranging from marijuana, which was fairly common, to a few who tried hallucinogenics such as LSD and mescaline.

“Marijuana was not only not frowned upon but really looked upon as something to build the intensity, deepen the experience,” said Richard Siegel, one of the co-authors of “The Jewish Catalog” and the director of the School of Jewish Nonprofit Management at Hebrew Union College-Jewish Institute of Religion in Los Angeles.

Siegel added that even those members who experimented with hallucinogens did so with serious spiritual intent.

But the havurah was also engaged in changing the larger Jewish landscape. In 1969, some members picketed the General Assembly of the Council of Jewish Federations in Boston, and one of them, Hillel Levine, gave a landmark speech demanding that the federations devote more resources to Jewish education.

By 1973, when havurah members Siegel, Michael Strassfeld and Sharon Strassfeld published “The Jewish Catalog,” which sold tens of thousands of copies, Havurat Shalom was at its point of maximum influence and prominence. Though not the country’s first havurah, it was the most iconic and the most influential.

But at that same time, the original core group of founders was largely on its way out. The idea of ordaining people as rabbis had long since been abandoned, and draft exemptions were no longer necessary. Green moved to Philadelphia to teach at the University of Pennsylvania. Others dispersed across the country looking for jobs.

Nonetheless, the attraction of Havurat Shalom was enough to draw in new members, even from afar.

“I actually moved to Boston because of Havurat Shalom in 1978,” Arzt said. “I moved to Somerville, and I took a map and I drew a circle around Havurat Shalom, half mile in radius, and looked for a place to live.”

The havurah members continued to work to put the community’s progressive values into action. In 1986, the havurah joined the sanctuary movement for Central Americans fleeing violence in their countries; the congregation housed a refugee from El Salvador for several years.

Around that time, the members also decided to embark on a project to radically revise the liturgy in ways that went well beyond the experimentation of the founders. Over the ensuing decades, havurah members have worked to make not only the English but also the Hebrew more gender-balanced, to eliminate references to the Jews as “chosen people,” to add prayers about diversity and to change some of the imagery used to describe God.

The project is ongoing, and the havurah is aiming to complete a revised prayer book incorporating these changes for the upcoming High Holidays.

Today’s havurah members range in age from their 20s to their 70s. At a recent Shabbat morning service, there were more than a dozen people in attendance, from children to the elderly, seated around the davening room on chairs and cushions. Prayers were lay-led and mostly in Hebrew, incorporating poetry by the Buddhist monk Thich Nhat Hanh.

Afterward, members sat around and chatted over cherries while a few trooped out together for lunch.

Some members acknowledge that they worry about the havurah’s future. The havurah does less in the way of social action than it used to, and attendance at Friday night services has dwindled.

“It used to be that Havurat Shalom was the only show in town,” Arzt said. “If you wanted open, relaxed davening, it was here or nothing. Now there’s a lot of other places.”

The founders, meanwhile, moved on to become some of the most prominent and eminent figures in Jewish life. Green went on to lead the Reconstructionist Rabbinical College before founding Hebrew College’s rabbinical school.

In recent years, Havurat Shalom has held reunions for its 40th and 45th anniversaries. In certain ways, the alumni and current members were quite different — the founding members found the revised liturgy so foreign at the 40th anniversary that by the 45th, the two groups split for part of the services. But they also found common ground.

“We recognized each other,” Siegel said. “These weren’t foreign bodies crashing together. You can see yourself in each other.”