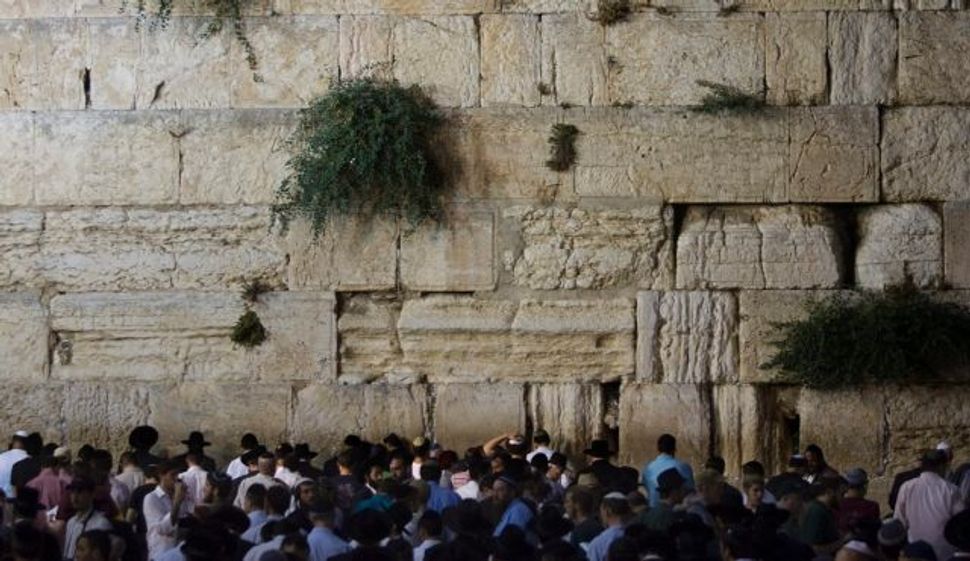 (Haaretz) — Some of the stones of the Western Wall are of lesser quality than others, according to new research, and may indicate that the contractors of the Second Temple were not above cheating their royal client, Herod the Great.

“It started with a simple question. We looked at the Western Wall and saw that there are areas that are disintegrating and others that have not changed. Ostensibly, it’s all limestone and so we didn’t understand why this should be,” said Dr. Simon Emmanuel, of the Hebrew University’s Earth Sciences Institute, who studied the subject together with Yael Levinson. The two recently published their findings in the journal Geology.

In addition to its religious connotations, the Western Wall has another unique aspect; there is no other wall in the world with such huge stones that has remained standing for 2,000 years and whose detailed history is so well known. For example, scholars know when the wall was exposed to the elements and when it was protected by buildings abutting it or covered with soil.

In the first phase of the study, a laser scanner was trained on the stones, sampling millions of points to create a three-dimensional model of the wall and then to discern areas that were eroding at a faster pace than others. They found that while some stones had lost only a few millimeters since the wall was built, others had lost dozens of centimeters. This erosion produced the cracks in which the faithful place their notes today, according to custom.

Emmanuel and Levinson then examined the differences between the stones and found that there were two different kinds. Both were quarried in the area around Jerusalem, but the stones that eroded more quickly had smaller limestone crystals, only a few microns in size (about a tenth the thickness of a human hair.) In contrast, the sturdier stones were found to consist of larger crystals, some 50 microns in diameter (about the thickness of a human hair.) This difference, which is not visible to the naked eye, becomes dramatic when the stone is exposed to rain.

Samples of stone were collected from sites where the Western Wall’s stones are presumed to have been quarried, and their erosion processes were examined under laboratory conditions.

The scholars also discovered a previously unknown process of limestone erosion, in which not only does the limestone disintegrate in the rain, but pieces of the stone chip away when they come into contact with water; that is, a physical as well as a chemical process.

About two years ago, following an Israel Antiquities Authority rescue dig in northern Jerusalem between the neighborhoods of Ramat Shlomo and Shoafat, a large stone quarry was found, dated to Second Temple times – the period when the Western Wall was built. The quarry was higher than the Temple Mount, which led the archaeologists to posit that it produced stones for the Temple, because it would have been easier for Herod’s builders to transport the giant stones from there down to the building site.

Difficult as it is to discern the difference between the stones, Emmanuel says the ancient builders could do so: “This is lesser quality stone, but they quarried it anyway. Herod’s contractors apparently cheated him,” he says.

Meanwhile, scholars say there is no concern over the stability of the Western Wall’s stones, given their massive size. But Emmanuel says that future generations will have to come up with a material that can be injected into the stone and slow the erosion of the more sensitive stones.

There will also be a problem of Jewish law to resolve by then: The Western Wall rabbi, Shmuel Rabinovitch, has ruled that the stones of the sacred wall must not be coated with any protective material. However, Emmanuel and Levinson’s research may be applicable to other antiquities sites in the country.