It’s been a strange summer for 15-year-old Tariq Abu Khdeir.

In the space of just a few weeks, the Palestinian-American boy visited east Jerusalem, where tensions were about to boil over. He also grappled with the murder of a cousin who was burned alive by Israeli extremists; got detained and was savagely beaten by Israeli authorities, and, thanks to a video of the attack, became, for better or worse, an international symbol of indiscriminate Israeli aggression against defenseless Palestinians.

By the time he returned to his family’s tidy townhouse on the outskirts of Tampa, images of Tariq’s bruised and swollen face had flickered in a near-continuous loop over cable news networks and across the screens of smartphones and tablets worldwide.

Now Tariq is an accidental icon. Previously nonpolitical, the teenager, whose main interests were fishing, soccer and basketball, is stepping in front of the camera again and again, flanked by his mother and his Florida attorney, delivering a polished message against Israeli oppression.

“I’m living in America with rights, with freedoms,” Tariq told the Forward in an August 6 interview in Florida, his voice swelling with emotion. “The people over there are living with nothing — without rights, without freedom, without homes!”

Yet there’s another side to Tariq that isn’t coming through in the sound bites and printed snippets that have defined him so far. That part of him is 15 years old, has just been through something terrible and has had little time to process the experience.

One thing he has worked out for himself, though, is that he wants justice for what he saw and experienced during his summer trip to visit his family, for what happened to him and to his murdered cousin, Mohammed Abu Khdeir, in east Jerusalem and to the displaced masses that lost their homes — and in hundreds of cases, their lives — to the Israeli bombs that fell on Gaza during the recent war there.

He wants justice, he said, but not blood. He said he doesn’t blame Jews for the problems in Palestine, and he wants to see the senseless killing stop.

Tariq is everywhere lately, and as a spokesman he’s just beginning to hit his stride.

“The Palestinian people are suffering,” he told a packed house during a talk in the Capitol building in early August, warming up the crowd. “What I’ve been through is just a small taste of what they all go through.” 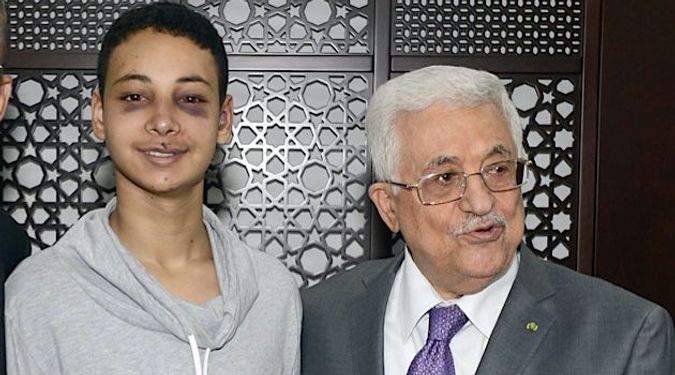 In front of the cameras he’s a natural. His delivery is casual but articulate. He can talk for stretches without appearing to look down at his notes. He manages to come off as both a regular kid and a forceful voice against Israel’s occupation of the Palestinians.

All this makes him a valuable asset in the struggle to gain traction with politicians who are loath to cross pro-Israel forces.

“If I’m in Tariq’s shoes, I would certainly take every opportunity to continue to meet with members of Congress to demand that my representatives do not continue to empower Israel to act against Palestinians,” said Tariq’s lawyer, Hassan Shibly of Tampa, who also serves as executive director of the Florida Council on American-Islamic Relations. “I definitely think Tariq is uniquely positioned to convey these points, and to challenge the prevailing narrative in Washington that Israel always has moral superiority and is justified in everything it does.”

As it happens, that’s what Tariq is trying to do. And the message is spreading.

In the past 30 days, his name was printed in more than 200 newspapers worldwide. His story has appeared on NBC, ABC and CBS. It’s aired on NPR, Fox News, MSNBC and the Canadian station CTV. He was invoked no fewer than 31 times on CNN. On August 7, a reporter brought him up during a Washington press briefing at the State Department.

But Jennifer Laszlo Mizrahi, the former CEO of The Israel Project, which promotes Israel’s image in the media, expressed skepticism about Tariq’s ultimate impact. In four recent focus groups that she held recently on Israel issues, said Mizrahi, Tariq and his beating never came up.

She added that Tariq was the victim of an awful attack and should be able to leverage it if he wanted to. “I don’t think there’s a problem with that,” she said.

Still, Tariq can’t walk through the airport without being recognized, said his mother, Suha Abu Khdeir.

“I had people coming up to us honored to meet him,” she said. “It’s amazing how big this got. And it’s good. We’re the voice now for Palestine. We’re the hope. It’s a lot of pressure. But it’s motivating.”

If the stress is getting to Tariq, he doesn’t let it show in public.

But privately, family members say, the attention is taking a toll.

Tariq’s cousin, Nour Abu Khdeir, 14, of Baltimore, grew up with Tariq and says he knows him better than anyone. Nour said he saw Tariq in August during one of Tariq’s visits to Washington.

“Do you know how many people wanted to take pictures with him?” Nour said, adding that he spotted a gray hair sprouting from the other boy’s head.

“It was an actual gray hair,” Nour said. “Imagine how many young people are getting gray hair?”

The cousin said Tariq’s grueling schedule left little down time, “because of all the protests they did. He went to meetings instead of doing the things he likes.”

Nour added: “His lawyer, he really sticks around him like glue. He won’t even let me talk to him sometimes.”

Tariq’s aunt, Fatima Abu Khdeir, said she sympathizes with her nephew, who has been thrust into a political world that he never paid attention to before.

As he makes his way, she said, it’s obvious he still is trying to make sense of his beating and imprisonment, and of his cousin’s violent death.

“He never, never was involved with politics,” Fatima Khdeir said of Tariq, referring to the boy she knew before he went off to east Jerusalem for his summer vacation. “But right now, it’s like his whole life has flipped to politics. He hates it. Really, he hates it. He told me: ‘Nobody will let me breathe. Nobody will leave me alone with my thoughts.’ But he’s thinking about his cousin.”

Tariq Khdeir was born on a spring day in 1999 in Baltimore, where he lived until he was 11. It was then that his mother, distressed at the poor quality of the city’s public schools, arranged for the family’s move to Florida.

Growing up, Tariq fished obsessively, applied himself at school, played sports and video games, and trapped lizards in the wilds of suburban Florida so that he could use them to tease his little sister.

As a teenager he was more interested in wearing good cologne and having the right kind of shoes than he was in Middle East politics.

“I used to worry about stupid things,” Tariq said, recalling his life before the beating.

And though he sometimes could have a quick temper, according to his cousin Nour, he never got in serious trouble in Florida — a point confirmed by the absence of any police records.

Tariq visited Palestine twice during his childhood, first when he was 1 and again when he was 4, but he remembered little as he boarded the plane in June for a long-awaited return.

As he made his way there, he said, he knew the plight of the Palestinians in only the most abstract way. “I was like, ‘Oh, yeah, there’s a lot of people dying,’” he said. “Then I went. Now I care way more.

“I was an innocent kid. Visiting Palestine. Just visiting my family.”

He was barely a week into the trip when his 16-year-old cousin, Mohammed Khdeir was kidnapped by Israeli extremists and burned to death. Swept up in the resulting protests, Tariq was corralled by a pair of Israeli policemen. According to the official Israeli account — a version Tariq denies — the teenager donned a mask, joined a mob and attacked authorities with a slingshot before he was detained.

Tariq said the police officers attacked him unprovoked. He said they pushed his face into the dirt and secured his hands behind his back with plastic ties. What happened next was captured in a grainy cellphone video.

Tariq remained in jail, thinking about his murdered cousin and nursing his wounds, for five days.

Ultimately, he was released without facing charges — a circumstance that, paired with Tariq’s rough treatment, has his family exploring legal action in Israeli, U.S. and international courts. Israeli authorities have announced that one of the several policemen seen on video taking part in the beating of the teen is under investigation.

When he finally started for home in mid-July, it was anybody’s guess how he would respond — whether he had come to hate his captors, and, by extension, all Jews. Whether he would become another voice calling for revenge.

‘No Child Deserves To Die’

It was how he finally responded that launched him on his current path. Just off the plane at Tampa International Airport, the teenager walked up to a bank of microphones and said, in a clear and measured voice:

“I am only 15, but I will never think about freedom the same way as I did two months ago. No child, whether they are Palestinian or Israeli, deserves to die.”

Later, during his interview at home with the Forward, he elaborated. There’s no reason to hate Jews, he said, whether in Palestine or anywhere else. “They’re just normal people like us. They’re not bad people. We’re not against them,” he said.

“I think some of our biggest allies in this have been members of the Jewish community,” added his lawyer, Shibly, who was listening in over a speakerphone.

By now, Tariq was stifling yawns and starting to stretch out on the couch in his living room. He was just off a long stretch of traveling, and he had a jam-packed schedule ahead of him. He also was set to start his sophomore year at his Islamic private school, the Universal Academy of Florida, in just a few weeks.

Navigating high school as a living flashpoint in a bitter political conflict would take its own figuring out. But he didn’t have time to worry about it just now. He had planes to catch, a message to get across.

“I just want to spread the word,” Tariq said, trailing off.

“Hopefully someone will listen,” said his mother, finishing the thought.

Michael LaForgia is a 2014 winner of the Pulitzer Prize for local reporting. Contact him at [email protected]