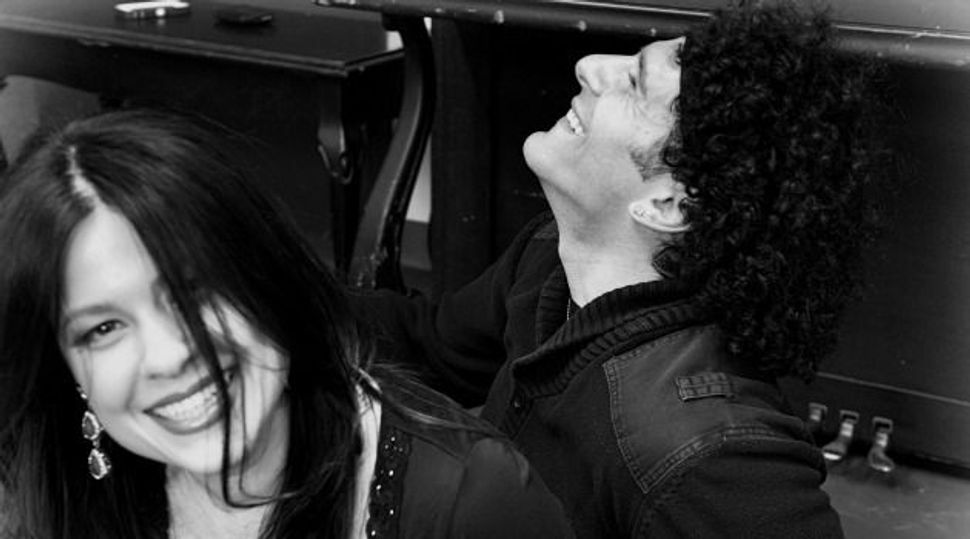 Once upon a time there was a prince and a princess of Jewish music.

They were loved and adored by their fans. But although they sang and spoke about healing and unity, something was missing from their lives. Their marriages had failed. All hope was lost.

Then they found each other.

A great deal has been written in the past year about the musical collaboration between Neshama Carlebach and Josh Nelson. But nothing has been written about the burgeoning romance that lies behind it. Late one recent Friday afternoon, in a cafe in the Park Slope section of Brooklyn, the couple spoke openly, if a little hesitantly, about the genesis of their relationship.

Nelson said it was critical that they each made the decision to divorce their partners before the relationship began.

“We are not each other’s saviors,” Nelson said. “But we are each other’s greatest supporters, and that creates a relationship that is balanced and beautiful and honest and without anything but real beauty and great hope.”

Carlebach looked at Nelson admiringly. She reached for his hand. “I like listening to you,” she said. “That was beautiful.”

It’s hard not to feel cynical, as Carlebach and Nelson describe how this romance has reinvigorated their personal and artistic lives. In print, their sentiments can seem hokey, even trite.

But Carlebach and Nelson inhabit a musical world of spirituality and healing. Coming from their lips, expressions of mutual respect and admiration are nothing but sincere.

Indeed, the story of how Carlebach and Nelson came together has a fairy-tale quality to it.

Carlebach is the daughter of the late Orthodox rabbi Shlomo Carlebach, whose songwriting, more than anyone else’s, has changed the sound of Jewish music in the 20th century. Nelson is the protégé of Debbie Friedman, the Reform Jewish songwriter whose influence on contemporary liturgical music was perhaps second only to Carlebach’s.

In the summer of 2012, a year and a half after Friedman died, the Wexner Foundation asked Nelson to produce a tribute album to Friedman.

A longtime admirer of Carlebach, Nelson called to ask if she would perform on the album. They talked music for a while, then Carlebach asked after Nelson’s wife.

“I said, actually, our marriage is over and we are in the process of getting a divorce,” Nelson said. “Then [Neshama] said, ‘That’s [an] extraordinary [coincidence], because my marriage is also over.’”

The two met for coffee, and a friendship blossomed.

Nelson became the friend that Carlebach turned to for advice, the one person who understood where Carlebach was both personally and professionally.

While her father was alive, Carlebach sang with him occasionally. But after his death, in 1994, when she was 20 years old, she performed regularly. She took to the stage almost nonstop for 18 years, singing up to the final weeks of two pregnancies and even performing with one of her children in a Baby Bjorn.

But the failure of her marriage in the summer of 2012 hit her hard. She took a hiatus from music and from love.

“I made all these decisions about how I was never going to love anybody — and for a Carlebach that’s a very big statement,” Carlebach said. “I was done.”

Carlebach and Nelson began dating in the fall of 2012. Through that winter, into the early months of 2013, Nelson tried to persuade Carlebach to return to the stage. He feared that the longer she remained silent, the harder it would be for her to start singing again. “Josh said to me, don’t forget who you are,” Carlebach said.

She performed occasionally. Sometimes, Carlebach and Nelson would appear as a special guest at each other’s shows.

Neither of them can recall the exact time or place, but sometime in early 2013 they performed as a double bill for the first time.

At the end of the concert, they performed a medley together: one song by Shlomo Carlebach and one by Debbie Friedman. Carlebach said: “I was crying, sharing, talking about who I was and thanking Josh for encouraging me to sing, and I watched people fall apart and get put back together to these songs.

“I realized the two of us united the Jewish people,” she added. “I am 100% more capable of healing the world when he is there.”

The pair performed together often through 2013, across America and overseas, including at Auschwitz and Japan’s Mount Fuji. Carlebach came to see her father’s music and Friedman’s music as representing “the heartbeat” of the Jewish people.

In December 2013, Carlebach performed with Nelson in San Diego at the biennial convention of the Union for Reform Judaism. It was there that she embraced what she sees as “the inclusiveness” of Reform Judaism. She announced to the delegates that her soul had made an aliyah (an ascension) to Reform Judaism.

That the daughter of Reb Shlomo could make such a declaration stirred anger in some parts of the Orthodox world. But in all the hand-wringing that followed, no one mentioned the obvious: that the two singers were in love.

Carlebach and Nelson said that over the months, some people guessed what was happening, and if anyone asked, they answered honestly. But they did not broadcast their relationship until a few months ago.

It was after a joint performance in Jerusalem in May that they decided it was time to go public. “It was an incredible moment for us,” Nelson said, “that this was for real on every level.”

Carlebach and Nelson updated their Facebook statuses to “in a relationship” with each other. Hundreds of fans sent messages congratulating them and wishing them well.

The couple still live in separate apartments. They tour separately, too. But they see each other often and share workspace in a recording studio in New York. On weekends they occasionally hang out together with their respective children, two from each marriage.

They both know that fairy-tale celebrity romances don’t always have a happy ending. But they’re hopeful that this one will.

When asked which couple they look to as an example of a romance that worked, Carlebach did not miss a beat: “Us.”