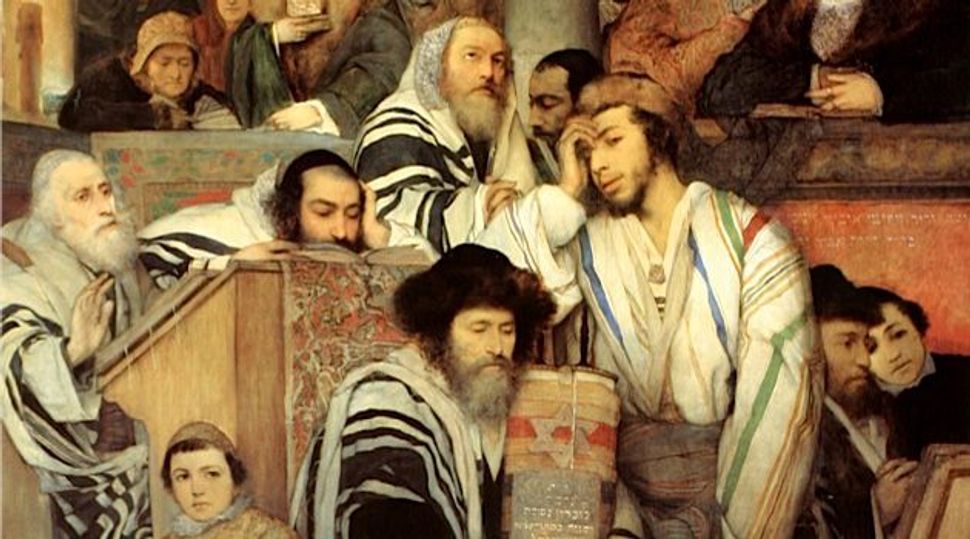 For every Jew who goes to synagogue on only the High Holy Days, there’s a rabbi keenly aware of that fact. Sometimes even sweating over that fact.

“I go through a number of different sermons — lots of paper crumpling, lots of false starts,” admitted Eli Herscher, senior rabbi of Stephen S. Wise Temple, in Los Angeles. “It’s the one time of year you know you’re going to see everyone, so the stress is around figuring out what you want to teach and talk about that feels sufficiently important.”

Other rabbis couldn’t help but agree — at least the ones who are most likely to experience a surge this time of year. (Orthodox rabbis see many of their flock each week.) They used words like “stress” and “frustration,” but also “joy” and “awe-inspiring” to describe how it feels to see all their congregants at once — “and always in the same place,” Herscher said. “People may come only once a year, but when they do, they want to feel at home. I can look out at the congregation and pretty much know where people are going to be seated.”

But as much as rabbis love seeing their synagogues filled to the rafters, there are some High Holy Day activities they could do without. Top of that list?

Members they see just once a year who expect to be greeted by name.

Readers: Don’t make your rabbi do that.

And don’t keep asking what time the services will be over — another High Holy Day pet peeve of rabbis. They are running a religious service, after all, not an airline.

Also, try not to announce, as some irregular synagogue-goers have been known to do, that “organized religion is evil.” Rabbi Heidi Hoover of Temple Beth Emeth, in the Park Slope section of Brooklyn, says that’s hard for a rabbi not to take personally.

In fact, it’s hard for a rabbi not to take personally the fact that so many congregants don’t feel compelled to experience organized religion at all, except at this one daven-or-be-damned time of year. And so, naturally, some rabbis feel that this is their one chance to lure folks into weekly attendance. “It’s your biggest opportunity to get your message out and share your state-of-the-synagogue address, and also try to get people involved,” Gruenberg said. “You get one crack at it.” “It’s a tall order,” said Rabbi Sadie Reuben, education director of Congregation Or Tzion, in Scottsdale, Arizona.

Other rabbis say they feel a different pressure. “I used to feel this is my one shot to give them a good experience so they’ll come back,” said Rabbi Eliyahu Fink of Pacific Jewish Center (the Shul on the Beach), in Venice, California. “Now my current perspective is, ‘If somebody has a good experience because they come to the High Holidays, I don’t want to minimize that, as if it’s only valuable [if] they’ll come back. I want this to be a great experience, no strings attached.” In other words, he said, the High Holy Days are “not a gateway drug.”

Rabbi David Cantor of Temple Beth Shalom, in Long Beach, California, agrees: “I used to think to myself, ‘Where have they been all year?‘ Now I think to myself that this is so magical! These are people who have no [Jewish] connection whatsoever, and yet they’re taking a day off work and coming to endure a service that they have no idea what it’s saying, no idea what it means; they’re probably just waiting for the magic words, ‘Now we will skip to….’ And yet it’s so important for them to come. What a blessing that I get to be there and help them connect!”

That connection isn’t just to his words or his synagogue, it’s to the entire Jewish experience. “You would never miss Kol Nidre, right? And you sing along? Well, at that moment you’re listening to that tune; you remember every time you’ve heard that tune and whom you were standing beside — your parents, your grandparents. And your grandparents could remember being with their grandparents,” Cantor said. So while you can’t know your ancestors from 500 years ago, you do know what they were doing on Yom Kippur. You’re doing it, too.

And as for the wistful rabbinic wish that all Jews could experience that feeling of connection all year round? The rabbis take a philosophical perspective.

“This is my 40th year in the rabbinate at this congregation,” Herscher said. “I really feel I know this congregation, and I’m just happy to see them. In a way, it’s similar to if I haven’t seen my own family in a long time: I would regret not seeing them, and wish that it were different. But if that weren’t possible, I would look forward to actually seeing them again.”

Just not if he has to remember all their names.

Lenore Skenazy is a public speaker and is the author of the book “Free-Range Kids” and the blog of the same name.