All the Senior Ladies 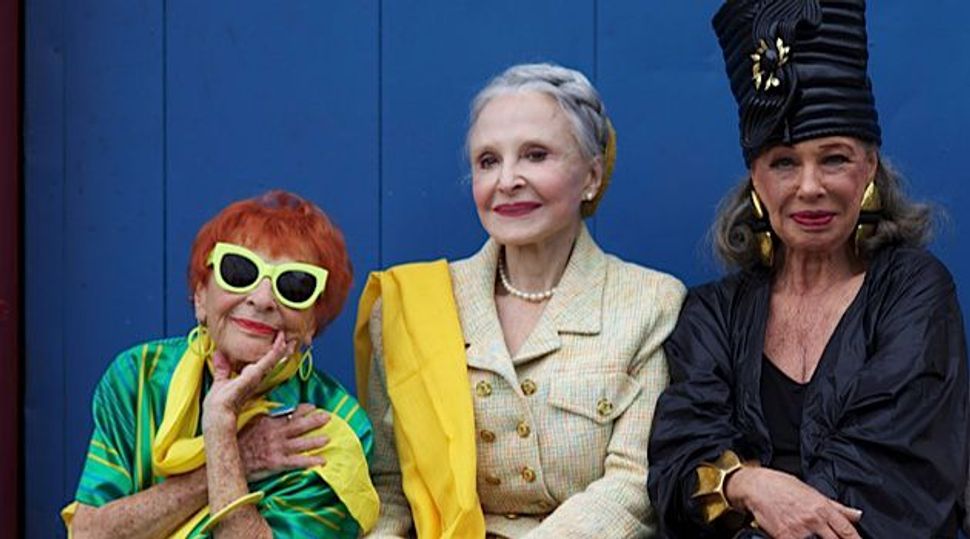 Ari Seth Cohen is a man who knows how to talk to ladies — at least if they’re 65 and up.

Cohen, 32, is the creator of Advanced Style, a popular style blog celebrating dapper women, and some men, in their later years. Since starting the photography blog in 2008 with the goal of capturing “the sophisticated and well dressed to the accidentally stylish and colorful folks out on the town,” Advanced Style has evolved into a coffee table book, a coloring book and now a documentary by filmmaker Lina Plioplyte.

The movie follows Cohen and seven of his subjects as they demonstrate their creativity and pursuit of style, while dealing with the difficulties — and joys — of aging. After receiving its U.S. premiere in May at the Montclair Film Festival, “Advanced Style” opens on September 26 in New York City, with screenings around the country in the coming months.

I met up with Cohen on the Upper East Side of Manhattan one overcast afternoon, tagging along as he hunted for stylish seniors to photograph.

Cohen is a friendly, heavyset man with chunky glasses, a day or two of stubble, and his own eye-catching wardrobe. On the day we met he was dressed in an olive shirt, decorated with yellow, pink and white flowers, which he wore over a purple tie-dye T-shirt. We got together outside of Barney’s department store, on the corner of 61st Street, before strolling up Madison Avenue to see whom we might find.

“He’s cool, but he’s not old enough,” Cohen said as we passed a man in suspenders, sunglasses and an impressive widow’s peak. “But I like him. Who knows? He could be my dad.”

“We just missed this lady,” he threw in a few blocks later, as we spotted a woman wearing a red sweater with black and gold trim outside the Alexander McQueen store. “She’s really gorgeous. Maybe after this car, I’ll ask. She might say no.”

Cohen didn’t start out as a photographer, but his interest in stylish older ladies seems predestined. He grew up in the Del Cerro neighborhood of San Diego — a city he deems “not very fashion conscious” — where he attended the San Diego Jewish Academy before going to the University of Washington, in Seattle. There he majored in art history. As a teenager he forged close relationships with his grandmothers, Helen Cohen and Bluma Levine, whom he considered his “best friends.”

“I spent a lot of time with my grandmothers, who were these wonderful Jewish ladies. We’d go to Palm Springs, and I’d always see how their friends would dress up,” he said as we continued up Madison, past Armani and Michael Kors storefronts. “It really inspired me to look at aging in a positive way, because I saw all these older ladies having fun and being active and vital and creative no matter what age they were.”

Cohen was especially close with his maternal grandmother, Bluma, who had attended Columbia University before becoming a librarian at the public library in Chula Vista, California. She told him that if he wanted to be creative, he should move to New York City, and after she passed away, in 2008, he followed her advice. 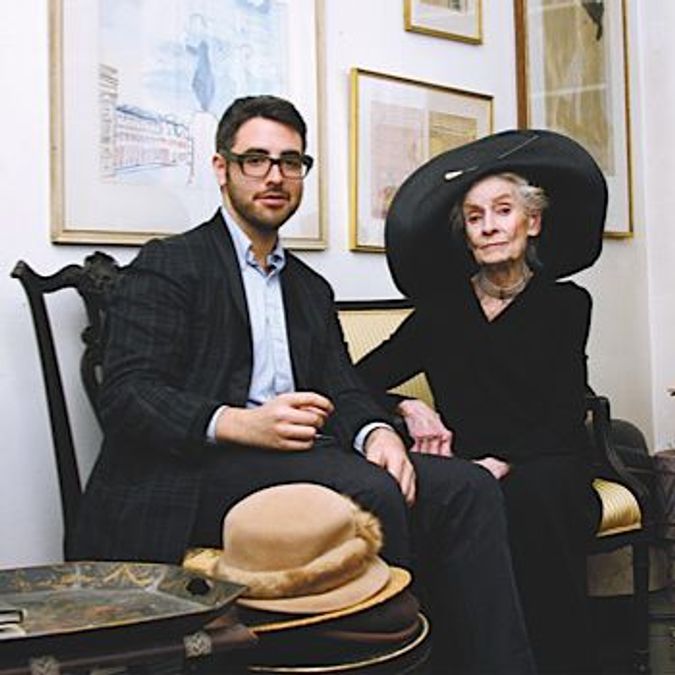 Cohen got a job working in the bookstore at The New Museum, but he also became increasingly passionate about his new hobby. Whenever an elderly person in a flashy outfit entered the building, he would ask to take her picture, and he would occasionally rush out to the street if he saw someone in an eye-catching ensemble pass by. Debra Rapoport, 68, an artist and textile designer who appears as one of the subjects of the documentary, recalls being approached by Cohen while he was still working at the museum. “I walked in one day, and he said to me: ‘Could I take your picture? I have a blog of women over 60.’ And the first thing I said was, ‘How do you know I’m over 60?’”

These days, Cohen is a little savvier in how he approaches his subjects. For one thing, he tells them that he’s looking for women older than 50, even though that’s not really true. But for the most part, Cohen relies on regular friendliness to woo his subjects, along with a heavy — if sincere — dose of flattery. In fact, he wants to find subjects who look their age, and that means not too much plastic surgery — which can be a problem in certain neighborhoods.

“I’m a little picky, I’m a little concise with what I’m looking for,” he told me. “I like to find people who really stand out in the crowd, who are really confident and really expressing themselves no matter what they’re doing with their fashion. And the whole point is, I want them to look older. If someone looks too young, I don’t take their photograph.”

Joyce Carpati, 81, who is now a friend of Cohen’s and another subject of the film, recalls being approached by Cohen on the street: “I was coming out of Bergdorf Goodman, and he stopped me and said, ‘Could I photograph you?’… I said to him, ‘I’m no cougar,’ and he said, ‘No no, it’s not like that at all.’”

Carpati was trained in Milan as an opera singer, and later became the first ad sales manager at Hearst Magazines. In the movie, she emphasizes a personal style rooted in simplicity: She wears only a couple of colors — one of them black — and an ever-present string of pearls.

As my afternoon with Cohen wore on, I started to worry that we might not find anyone meeting his specifications. But turning down Third Avenue we caught sight of the perfect subject: a gray-haired woman in aviator sunglasses, a black jacket and a black-and-white leopard print skirt. In a flash Cohen was chasing after her, making his pitch.

“Excuse me? I’m sorry to bother you and I know you’re holding your groceries, but you’re dressed so lovely and I’d love to take your photo if you don’t mind. Thank you so much; you look great. I’ll take a portrait real quick, and then just one more. Do you dress up every day?”

“Well, I get dressed — not dress up,” she said. “But I’m going to a very nice lunch today, so instead of wearing my shlumpy clothes, I got a little dressed.”

“Well, you look wonderful. I’ll give you my card — I have a website where I photograph women all over the world, and a book.”

“Thank you. And I have to tell you I have been photographed before. People think I look good for an old lady.”

“You look good for any age.”

A few clicks of his Canon 5D later, and Cohen had a new batch of pictures for his blog.

Cohen hasn’t been the only success story to come out of Advanced Style. The exposure has created new opportunities for his subjects, as well. While some of the women he photographs are already famous — he has shot fashion icon Iris Apfel, for example, and the late author Bel Kaufman — others have been discovered through his work.

In the movie we see Rapoport on a billboard for Kmart (“Money can’t buy style”) and Jacquie Tajah Murdock, an 83-year-old former Apollo Theater dancer, become the face of Lanvin Paris. Several of the women meet with TV executives to participate in a program called “Elder Skelter,” and we see the group fly to Los Angeles to appear on a segment of “The Ricki Lake Show.”

“They never wanted to stop working or creating, they just didn’t really have opportunities,” Cohen said. “I guess this project has created a new career for some of the ladies.”

Cohen’s project has also given rise to a whole community of fashionable seniors, both in person and online. On the day we met, Cohen was headed afterward to a tea party with Rapoport, Carpati and a few others. In “Advanced Style” we see a similar gathering take place on National Hat Day, with Cohen capering around in an elaborate flamingo-shaped headpiece.

“I think that in New York there have always been these women who have lived here, and I think they’ve seen each other but not necessarily talked to each other,” he said. Now, thanks to him, many of them have become friends with each other, as well as with younger admirers.

“There’s a lot of young girls who admire the women and who have become friends with them,” Cohen said. “They are at a point in their lives when they want to give of themselves, and I think they have something to teach about life.”

They certainly have something to teach about looking snazzy — no matter how old we are.

All the Senior Ladies