Where Do Shofars Come From? 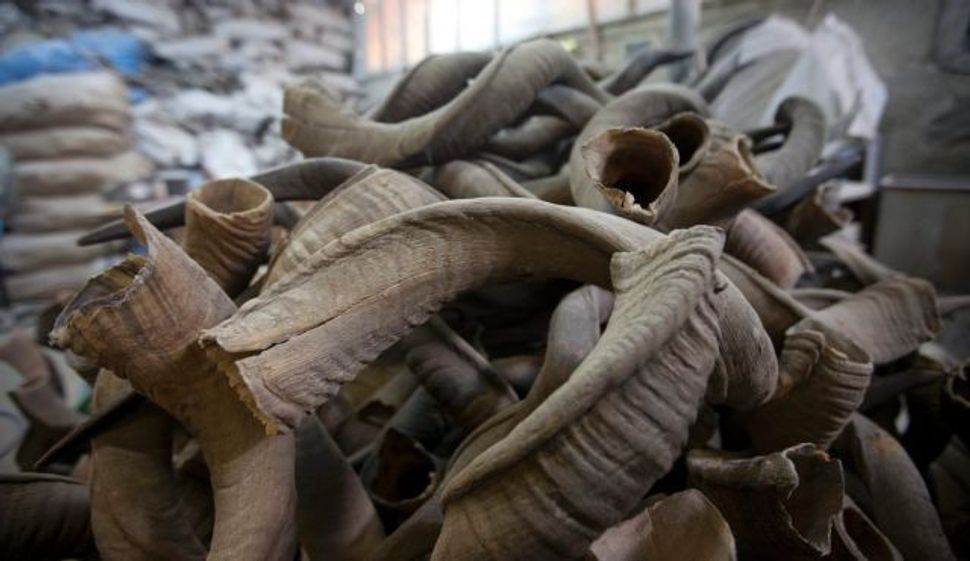 (Haaretz) — If any business qualifies as seasonal, it would have to be shofar sales.

Just ask Eli Ribak, whose family has been in the business of producing and selling these traditional instruments made from animal horns for three generations. “It’s a madhouse these days,” he says, wiping beads of sweat from his forehead.

Eleven months of the year, reports Ribak, the traffic in his nondescript quarters is slow at best. But come Elul, the Jewish month that precedes the High Holy Days of Rosh Hashanah and Yom Kippur, and he’s mobbed. Not surprising, considering that this hole-in-the-wall in south Tel Aviv ranks among the biggest shofar-making factories in the world, if not the biggest of all. It’s also Israel’s best known.

Many people roam in off the streets to have a look, try out the sound or purchase a gift, but Ribak’s main customers these days are the professionals – that is to say, the shofar blowers designated as such by their synagogues and communities to fulfill the special commandment for which the Jewish New Year is known. The advantage of doing business directly with him, maintains this expert of the craft, rather than simply buying a shofar at a Judaica shop on the street (and there are dozens around) is the custom fit. “If the opening has to be adjusted to suit a particular size mouth, I can do that,” he boasts.

According to Jewish tradition, the shofar is blown before, during and after the Musaf prayer on both days of Rosh Hashanah (though not if it happens to fall on Shabbat), which begins this year in the middle of next week. In addition, it is blown once to mark the end of the fast of Yom Kippur.

The most popular brand, says Ribak, is what’s known as the Ashkenazi and Sephardi, a very basic-looking shofar made from a ram’s horn. The Yemenite shofars are the long, curly ones made out of antelope horns, which undergo no reshaping or polishing. Also on display are the Moroccan shofars, whose distinctive feature, Ribat points out, is their flat surface.

Bar-Sheshet Ribak Shofarot Israel has been in the shofar business since 1927. A partnership between the Bar-Sheshet family, which originated in Morocco, and the Ribak family, which originated in Poland, this Sephardi-Ashkenazi duo combine 15 generations of expertise in shofar making between them. In addition to the main factory and shop in south Tel Aviv, run by the Ribaks, the Bar-Sheshets operate a somewhat smaller facility in Haifa. Israel’s other shofar-making factory, which derives most of its business from visitor tours, is located on the Golan Heights.

In a small back room that serves both as a warehouse and production site, thousands of animal horns are stuffed into heavy-duty sandbags. The lack of air-conditioning makes the stench of animals here even more pronounced.

In one corner of the room, two workers (out of a total of four employed in this factory) are sanding ram horn surfaces on old-fashioned machines. One of them, a smiling young man from Congo who’s been working at this factory for 10 years now, jokes that he is one of the world’s leading experts on shofars. “I can even blow two in my mouth at once,” he boasts.

Prices range from “tens to hundreds of shekels,” according to Ribak, depending on the amount of finishing work required. The more elaborate, bejeweled shofars, he says, can fetch upwards of hundreds and even thousands of shekels. About 20 to 30 percent of his output is sold overseas, and the rest either directly to customers in Israel or to the many shops in the country that specialize in Judaica and souvenirs.

In recent years, a main source of competition for this family-run business has been, believe it or not, China. Many local souvenir shops, notes Ribak, carry the Chinese-made brands, though often shoppers are not aware that these shofars are not kosher for use in synagogues, as they are not certified by the Chief Rabbinate. Shofars that contain cracks, even if they are filled – as are many of these “fakes,” he points out – are not considered kosher.

“It is the obligation of the shofar blower to validate that it is in fact kosher,” says Ribak, pointing proudly to his own kashrut certificate, displayed prominently on his desk for all to see.

But the Chinese shofar traffic is not restricted to one direction. In recent years, with tens of thousands of Chinese Christians coming on organized pilgrimages to Israel, the shofar has become a must-have on many of their shopping lists. “They love bringing back Judaica as souvenirs,” explains Ribak, “so what better piece of Judaica than a shofar?”

Where Do Shofars Come From?