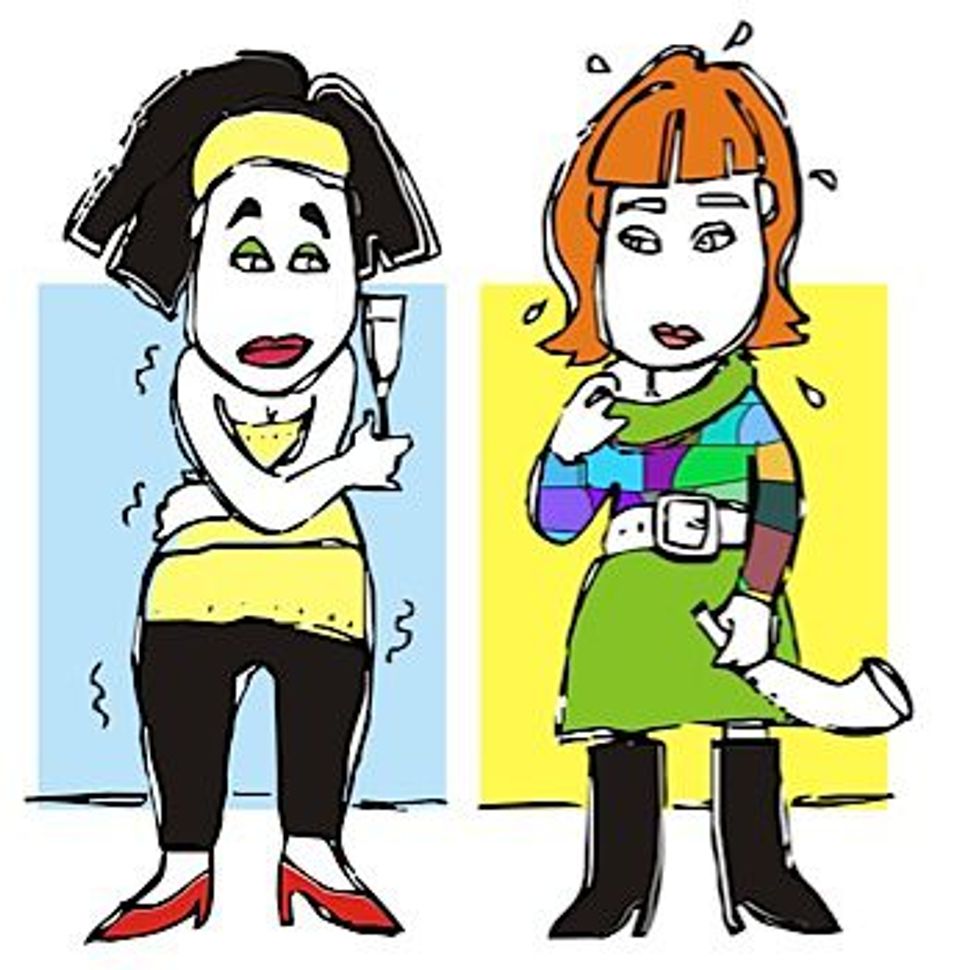 For members of the tribe, September marks a new year. We dip apples in honey to celebrate Rosh Hashanah. Three months later we dip chips in salsa to ring in the secular New Year. We love having two opportunities to celebrate.

How is the Jewish new year, Rosh Hashanah, different from that other New Year? Let us count down the ways.

On secular New Year’s Eve we make resolutions with the best of intentions. We promise to walk on the treadmill for 30 minutes a day, to stop wasting at least $4 on a latte at Starbucks and to give up all refined sugar. At Rosh Hashanah services, we say prayers to begin the ten days of repentance because we’ve forgotten those resolutions. This repentance comes in handy at the Kiddush when we see that there is rugelach.

The melody to “Avinu Malkeinu” hasn’t changed in a million years. Compared with this, “Auld Lang Syne” is a recent hit; it has been on the charts for only 226 years. With both songs, the crowd starts off strong. Everyone knows “Should old acquaintance be forgot… ” and “Avinu Malkeinu sh’ma kolenu…,” but many trail off after the first line or two and mumble the rest.

While the cantor is a professional who reads Hebrew and has a beautiful singing voice, the New Year’s Eve party disk jockey might be the host’s nephew who hooked up his iPhone to a set of speakers. If the DJ doesn’t mix it up, he won’t get the gig next year. But if the cantor does a Rosh Hashanah remix, the congregation shouts “Dayenu.” No one expects new tunes on Rosh Hashanah; it’s surprising enough when the cantor comes down off the bimah to sing the prayer Hineni from the back of the synagogue.

The shofar, made from a ram’s horn, has a proud tradition: It was sounded on Mount Sinai when the Jewish people received the Ten Commandments. The glitter paper party horn, made in China, comes in an eight-pack for $1.99. When the cantor calls out the notes for the shofar, we happily anticipate the familiar blasts, but when Ryan Seacrest counts down the minutes to midnight, we dread hearing drunk party guests blast their horns.

An old hit song asked “What Are You Doing New Year’s Eve?” That is a fair question, because staying home alone is not an acceptable answer. Those who don’t have plans search for a date and for a party invitation.

Even though we’re married and have a date, staying home can still make us feel like social outcasts. That’s why we’ll cajole our partners to get dressed and go to the neighbor’s party. How would it look if our January 1 Facebook post divulged that we sat on our sofa, ate takeout sushi and watched “Sleepless in Seattle” for the eighth time? No composer ever wrote “What Are You Doing Rosh Hashanah?” because everyone knows the answer is, “going to synagogue.” Even those people whose synagogue attendance is sparse throughout the year put in an appearance on the High Holidays. That’s why we have to park in the overflow lot at the church next door and say “Excuse me” over and over to a full row of people when we sneak out to the bathroom.

The kids make fun of the man who dozes off in synagogue: His eyelids droop, his breathing gets louder and he doesn’t stand up when the ark is opened. We hope the woman sitting next to him gives him the elbow before he starts to snore.

We think it’s worse to fall asleep in synagogue than to doze off before the clock strikes midnight. When our children were little, we would promise to wake them up for the midnight countdown, but we never did. We know the rule: Don’t wake a sleeping child. Now, if our partners start to snore before the ball drops, we just let them be. Why wake a sleeping husband (or wife)?

On Rosh Hashanah, we know we have to look presentable. When we were teenage girls, we were eager to break out our new school clothes for synagogue. Now we’re happy to wear that old summer skirt and top one more time.

In synagogue, a quick scan of the pews can tell us who bought the latest fall fashions: They are the ones shvitsing in their new tweed suits and knee-high leather boots. We also aren’t enthusiastic about wearing a wool suit when the temperature is still in the 80s. Then and now, we refuse to wear pantyhose. We’re still tan from the summer.

On New Year’s Eve we’ll dig into the closet and pull out the sequined tank top and black crepe pants that we save for fancy occasions. Then we go out into the freezing cold and wish we had worn our tweed skirt and knee-high leather boots.

Any teen can tell you that kissing at midnight on New Year’s Eve is a big deal. Teenagers jockey for position so that they are not next to the nerd from science class when the announcer calls out “10…9…8….”

At Rosh Hashanah services there is no countdown to a big kiss. When the rabbi says, “Let’s all turn to page 153,” you’re not expected to kiss the person sitting next to you.

The standard “Happy New Year” doesn’t differentiate between those who are ringing in the Jewish or secular new year. Those in the know greet a fellow MOT in the supermarket or the carpool line with an enthusiastic “L’shanah tovah.” Using the correct Hebrew phrase is shorthand for, “I know you are cooking a brisket, and I’ll see you in synagogue on Thursday.”

So raise your champagne glass and put on your party hat. We’re gonna party like it’s 5775.

Joyce Eisenberg and Ellen Scolnic are the authors of the Dictionary of Jewish Words. Follow them on Twitter @TheWordMavens