Sailing To Understand Talmud and Torah 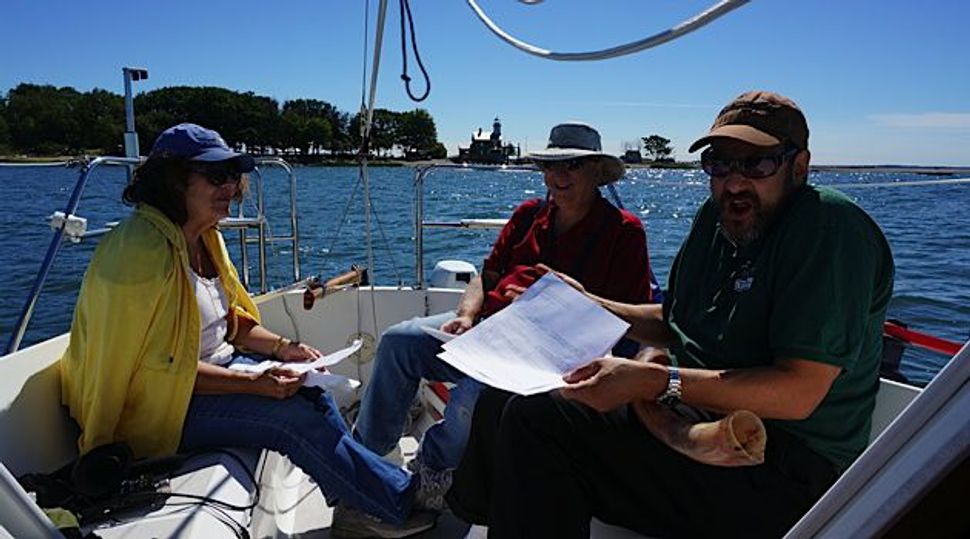 Not Your Regular Classroom: Congregant Joyce Singer, skipper William Berson and Rabbi Greg Wall during a Talmud class on board a sailboat. Image by Jon Kalish

On a recent weekday morning, Rabbi Greg Wall blew a 3-foot-long shofar off the coast of Norwalk, Connecticut. It was part of a Talmud class he teaches regularly aboard a 23-foot sailboat named Enough. Wall is better known for blowing a saxophone at jazz performances, but this particular gig is part of his day job as spiritual leader of Beit Chaverim Synagogue of Westport/Norwalk.

Every Friday, a small group of congregants attends Wall’s class, “Adrift in a Sea of Talmud,” aboard the vessel, which is owned by a member of the Modern Orthodox congregation. The synagogue prides itself in welcoming Jews, no matter what their level of observance is. The notion of holding a floating Talmud class is consistent with Wall’s past efforts to find new ways to connect Jews with Judaism. It’s an approach that involved many music events during his tenure at the Sixth Street Community Synagogue, in Manhattan’s East Village, from 2009 to 2012.

Combining learning content with direct experience, also known as experiential education, is a practice more common in Reform and Conservative Judaism, but some in the Modern Orthodox world are beginning to embrace it as well, according to Wall — because of a realization that Jewish literacy must be increased.

“Lack of literacy is a chief cause of people drifting away from traditional communities, and it leads to a decrease in observance. It also increases the risk of outright assimilation,” said Wall, who hopes to lead a flotilla of families from Beit Chaverim in the Caribbean to study Torah and Talmud while they sail. “Nontraditional settings are one way to foster literacy experiences.”

On a sunny afternoon in mid-September, the talmudic discussion focused on the mitzvah of hearing the shofar on Rosh Hashanah and identifying its requisite sounds.

Wall speaks about the number of shofar blasts, the different kinds of blasts and in what order they are to be made on Rosh Hashanah. He explains that the Talmud discusses the shofar sounding like human crying by using examples of a slow sobbing and a faster-paced wailing.

“What does the Gemara say?” Wall asks his class. “It says the way a person ordinarily cries is that they increase in their intensity. They start off slow, and they get faster.”

In addition to being a Talmud khokhem, or smart man, Wall is a man who knows a mainsail from a jib, having taught at sailing schools in New York and New Jersey. He helps the boat’s skipper, William Berson, hoist the sails, drop anchor and direct everyone on board to sit on the other side of the boat when the vessel is tilting what seems to a landlubber precariously close to the water.

“I feel you can’t get any closer to God than being on a sailboat,” the rabbi said while he adjusted one of the sails as Berson piloted Enough through a gusty wind.

The veteran sailor is quick with a joke. After Wall demonstrated the teruah, or blast, on the shofar, Berson chimed in: “If there’s fog, he’ll blow the shofar more than once.”

“Torah is like water, and water always spreads out,” Wall said. “When you’re trying to spread Torah, we look for openings, and this Talmud at Sea class is a great opening.”

For Joyce Singer, a Beit Chaverim congregant, the Talmud class on the sailboat was the first time she had studied Talmud in a formal setting.

“When would you have a chance to really think about God and our sages and the reasons why we do things?” she asked. “Even when we’re in synagogue, there are moments when I have worldly concerns, but it didn’t happen out here on the water, away from all mundane daily tasks. I was away from everything. It’s very special.”

Jonathan Sarna, a professor of Jewish history at Brandeis University, had not previously heard about Jews going out on a boat to study Talmud. “But I am not surprised,” he said. “This is just a modern version of the rabbinical dictum to make set times for studying Torah.”

Rabbi Avi Orlow, director of Jewish education at the Foundation for Jewish Camp, explained Wall’s concept of experiential Jewish education for the Talmud class by referring to a scene in the 1984 film “The Karate Kid.” In the movie, the eccentric karate master Kesuke Miyagi first lets his student do menial chores. When the martial art training begins, the student realizes that he has learnt how to fight without noticing it, as many moves require motions similar to housework. Such a Miyagi Moment of epiphany occurs when an educator helps students to learn while they focus on other experiences. Rabbi Orlow said it also has to do with giving yourself over to a master. “There’s no escaping when you’re on a boat,” said Orlow. ”People might not come for the Talmud class. They may come for some nice sailing. But they sense that we’re all in this together.”

Jon Kalish, a Manhattan-based radio reporter, has reported for NPR since 1980.

Sailing To Understand Talmud and Torah