Tales of a Jewish ‘Nun’ 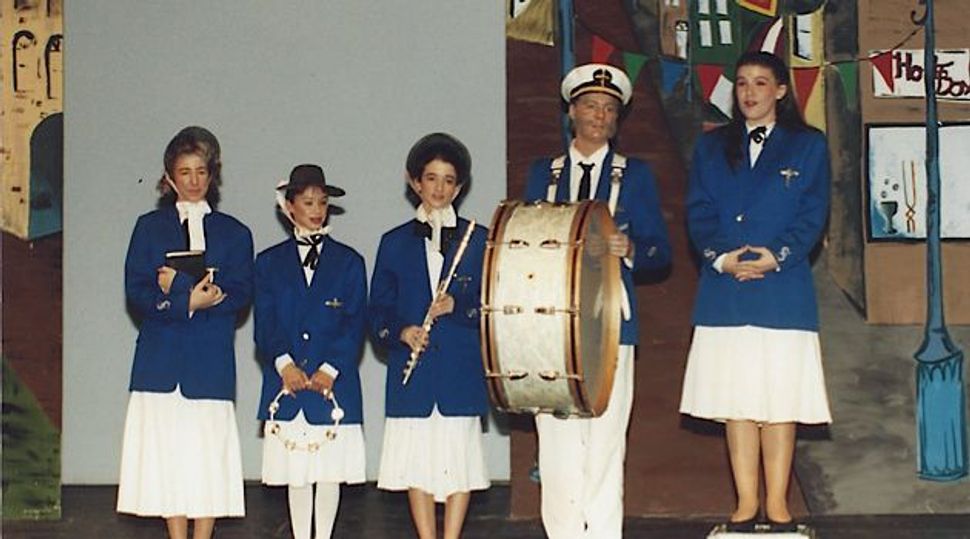 My high-school nickname was “The Jewish Nun,” and it has taken me almost 20 years to see the appropriateness of it.

The “nun” part was an accurate description of my high school theatrical career, which was oddly confined to religious roles, including a novice in a one-act play about a convent sheltering Jews during the Holocaust; Sister Agatha, one of the missionaries in “Guys and Dolls,” and one of Christ’s 12 apostles in “Jesus Christ Superstar.” While I bemoaned the typecasting, I also learned how to fasten a wimple and to cross myself, and to date my knowledge of the Gospels always gets filtered through Andrew Lloyd Webber.

The “Jewish” part was meant ironically: Everyone knew a Jew couldn’t also be a nun. Everyone knew that my mother is Jewish, which, according to Jewish law, means that my brother and I are, too. But when she left her Connecticut hometown in the late 1970s for rural life in eastern Maine, where I grew up, she left Judaism behind as well. “Twelve years of Hebrew school was enough,” she’d say. Her decision led to my predicament: If I choose to subscribe to Jewish law, then I am a Jew; but if I don’t, I am not.

As a kid, I felt that such big decisions should not be up to me. Wasn’t there some universal authority that could tell me whether or not I was a Jew? So I created my own conditions: I did not have a bat mitzvah; I never belonged to a synagogue. For most of my life, my Jewishness felt just as theoretical as the membership in the Daughters of the American Revolution, to which my father’s Mayflower WASP heritage technically entitled me. If anyone asked, I told them I was half-Jewish, but not really anything.

In the early 1990s I traveled to Israel with my then recently divorced mother and the Jewish man from out of town she was seeing at the time. It was during the brief post-Oslo Accords hiatus in the violence, a time when you could still drive your rental car through the West Bank and stop to buy a hot dog. I don’t talk about this very often, because I don’t want the fact that the very short list of countries I have traveled to includes Israel to point to some kind of political or religious alliance.

Back home I went through a brief “Jewish phase” that consisted of reading James Michener’s “The Source” and some nameless piece of propaganda that insisted anyone who was against the actions of the State of Israel was anti-Semitic. All this felt like preparing for a theatrical role that I would never play. It was fun to put myself in someone else’s shoes for a while, but in the end this version of Jewishness just didn’t fit me.

My fascination with religion persisted nevertheless: I majored in religious studies in college, much to my nonreligious parents’ puzzlement. As a student, I tried to maintain what I thought was a professional, scholarly remove. When someone asked me if I was studying religion in order to become, um, a minister of some kind, I scoffed: “Would you ask a biology major if she planned to become a plant?” A person was either religious or not, either participant or observer.

But since moving to New York and working as a religion writer and editor four years ago, it’s become difficult to remain strictly above the fray. When it comes to religion, even the practice of objectively reporting on it tends to take on a point of view after a while. I am the editor-in-chief of Killing the Buddha, an online literary magazine that specializes in “first-person dispatches from the margins of faith.” The magazine is obsessed with religion but is not religious itself, which can be a tricky balancing act to pull off. We get devotional submissions from born-again leaders and diehard atheists, all of which we reject. Our readers and writers are more advanced than that: They are feminist Catholics, pagan Texans, agnostics with Asperger’s syndrome, Midwestern Muslims and other white elephants looking for appreciation, support, community.

When I learned that Killing the Buddha has been run by many half-Jews like me, including Jeff Sharlet, who co-founded the magazine in 2000, my self-definition started to shift.

At first, my authenticity-obsessed self thought of the test results I’d recently received from the DNA service 23andMe, which revealed that 47.8% of my genetic makeup comes from the haplogroup identified with Ashkenazi Jews; technically, I wasn’t even half Jewish. Then I thought better of saying so. (No, the Jewish me wouldn’t win a congressional vote, but she certainly had the plurality.)

It wasn’t the “Jewish” part, my fellow half-Jewish editor explained to me, so much as the “half” part that seemed key to the magazine’s offbeat sensibility. When you grow up half-Jewish, you grow up knowing, viscerally, that it is possible to be more than one thing at a time, even if those things are seemingly in conflict. You always have one foot in and one foot out of the tribe. This marginal viewpoint is something I’ve always had, but I thought about it as a lack of something rather than as its own position.

Several recent studies show that I was wrong about that. The marginal viewpoint is spreading. For most of us, religious identity is becoming less and less fixed, even though we live in an age where the extremes of religious belief garner the headlines. Religiously unaffiliated people make up a full one-third of Americans younger than 30, and the fastest-growing segment of the American population consists of people who check “none of the above” in surveys by the Pew Research Center. Another much-discussed Pew study found that one in five American Jews says he or she has “no religion.”

Having lived under my own self-imposed standards of religious purity for more than 30 years, I know the last thing we need is more “pure,” “authentic” religion. When it comes to American religion in the 21st century, mixture and paradox are the order of the day. I have personal beliefs. I have ritual practices. And I have a community of like-minded people. What more could I expect of myself? Besides, have we missed the fact that those American Jews without religion surveyed still proudly identified as Jews? Cultural identity doesn’t seem to be going anywhere. If these people could have it both ways, maybe I can, too.

It’s time for me to relax the strict devotional and genetic qualifications of my childhood. If I can be a Jew with no religion, obsessed with faith but not faithful, I can be a contradiction: a Jewish None, if you will.

Brook Wilensky-Lanford is the author of “Paradise Lust: Searching for the Garden of Eden” (Grove Press, 2011) and the editor-in-chief of the online religion magazine Killing the Buddha. Follow her on Twitter, @modmyth

Tales of a Jewish ‘Nun’