Hunting for the Perfect Etrog in Brooklyn’s Back Streets 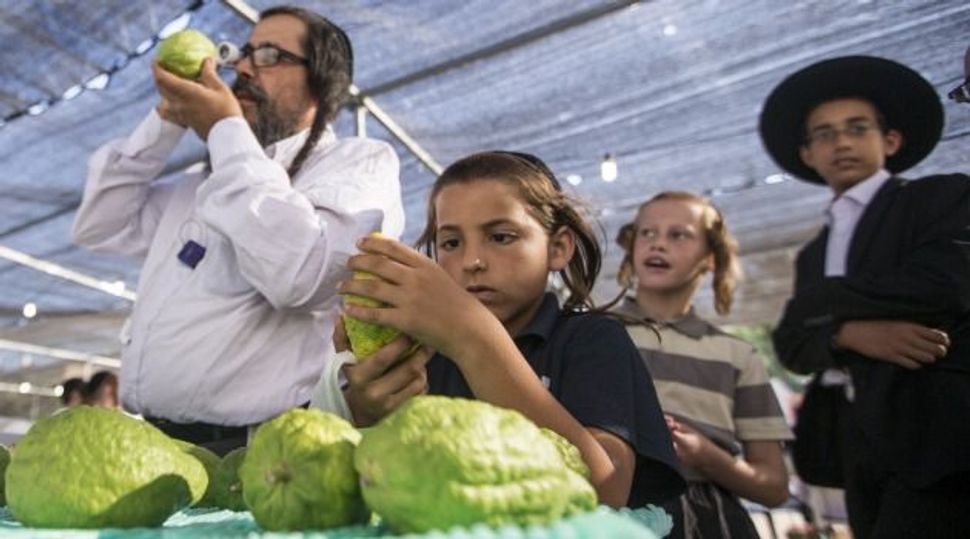 “Find something wrong with it – find it!” a glowing Berger exclaims Monday as he holds his treasure: a bumpy, lemon-like fruit.

In open-air markets and on tables unfolded on sidewalks in Jewish communities throughout the world, many Jews preparing for Sukkot, which begins Wednesday evening, look for lovely etrogim, the fruit that constitutes the centerpiece of the biblically mandated four species to be blessed during the weeklong holiday.

Many celebrants will take the basic etrogim commonly sold by synagogues, Jewish schools and shops for about $50 for a set that also includes a lulav (palm branch), myrtle and willow.

Then there are men like Berger, who think nothing of dropping hundreds of dollars on an especially beautiful etrog, which they believe enhances their fulfillment of the mitzvah.

No sooner does Yom Kippur end than such customers seek out Dahan, 38, a resident of Jaffa who owns three hotels in Tel Aviv but has trekked to New York City the past 15 autumns to hawk his high-end etrogim. They are rippled and slightly smooth, hefty and slim, shiny in hue and subdued – in etrog selection, as in life, beauty is in the eye of the beholder.

Above all, though, Dahan’s etrogim are symmetrical and close to blemish-free – and are pure, ungrafted.

All come from the 200 trees on a half-acre plot of land Dahan leases in Dumdir, a village in southern Morocco, his parents’ homeland. Dahan visits four times a year to monitor their growth and consult with his one full-time employee.

His last visit there preceded Rosh Hashanah, when Dahan selected the crop’s 2,000 best. In a Moroccan hotel room, he categorized the 200 most pristine specimens promising top dollar, examining each for texture, shape and, above all, the slightest of flaws.

He’s not alone catering to the market in Williamsburg, where the primarily Hasidic community is dominated by the Satmar sect, with smaller pockets of Bobov and Vizhnitz. In the weeks before Sukkot, several other storefronts and trailers pop up in the neighborhood, with dealers and growers offering premium etrogim from Israel and Italy, along with Morocco.

Some of the merchants, like Dahan, also market to the haredi Orthodox community in Monsey, a town northwest of New York City.

In the trailer, Berger slides his eyeglasses down near the tip of his nose, the better to inspect the etrog he’s grasping. He takes a cotton swab from a box and dabs at the surface surrounding the pitom, as the stem is known, trying to discern if the pinhead-sized speck he spots is merely a wayward dirt particle or a blemish.

Ten minutes into the inspection, Berger phones his rabbi, detailing his observations in Yiddish. He hangs up, calls again, then returns the etrog to a foam-lined box that he sets aside on a table.

“I’m going to have a cup of coffee and think about it,” Berger says.

Ten minutes later, he returns, seizing another etrog and examining it.

This one is smaller than many others displayed, and the pitom is angled slightly, but Berger is smitten.

“It’s clean – perfectly clean. For me, that’s the most important,” Berger pronounces of the $200 etrog that he calls “a bargain.”

He’ll also take the one he’d reserved earlier – and two more besides for his brothers. He leaves a $200 deposit for the four etrogim, which he takes away for his brothers to examine.

Six blocks down Lee Street, Dahan sits in a vacant storefront, his other temporary outpost in Williamsburg. Two tables host four reading lamps to help customers scrutinize the merchandise. A man who inspects for 45 minutes leaves without purchasing.

The business is “very hard,” he tells a visitor in Hebrew. “[The customers] are very hard – justifiably so because they’re spending a lot of money.”

He reaches back to fetch a $275 etrog, nearly all green, unlike its yellow brethren.

“You see that?” he says, pointing to a white speck smaller than the period at the end of a sentence. It’s the slightest of flaws, if that. But someone might scorn it.

The entire enterprise yields an annual profit of less than $10,000, Dahan says.

His late grandfather, Yaakov Assayag, a tailor in Marrakesh, got into the business 70 years ago, and several of Assayag’s sons followed suit. Lore holds, Dahan explains, that Morocco’s Dumdir has yielded the finest etrogim since the exile following the Second Temple’s destruction.

A customer enters. The first etrog proffered fails to impress in price ($275) or looks. The second ($300) falls short, too. Dahan hands over a third costing $350.

The man asks whether Dahan’s competitors offer his top quality. It’s a softball that even a fatigued Dahan swats. It’s nearing 8 p.m. and he’ll be here until midnight.

“You won’t find better,” Dahan states authoritatively, as if it were fact not opinion. “Don’t make a mistake. You’ll wait for the last day, won’t get what you want and you’ll be going crazy.”

Hunting for the Perfect Etrog in Brooklyn’s Back Streets