Is Sarah Silverman the Anti-Sandy Koufax? 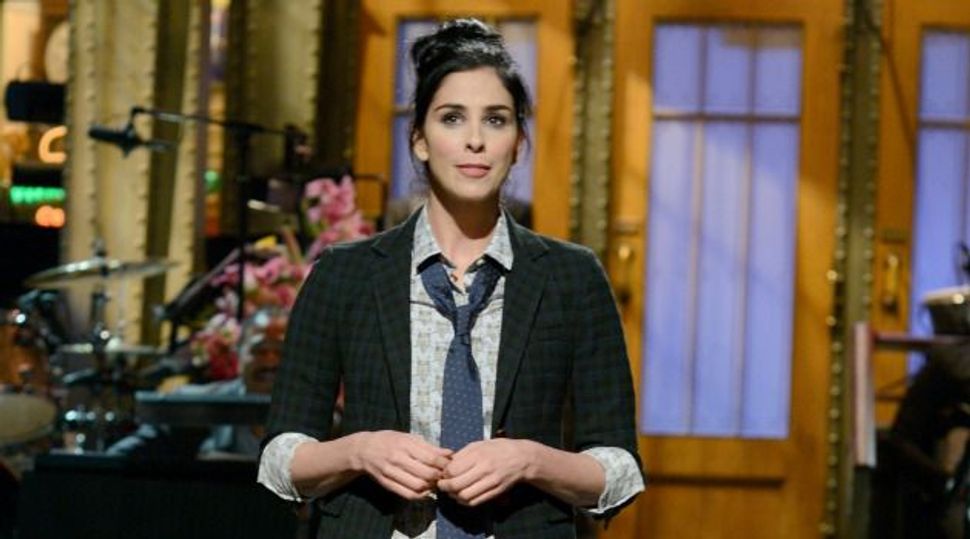 But Was She Funny? Sarah Silverman hosts ‘Saturday Night Live’ on October 4 — after Yom Kippur, her agent insists. Image by Getty Images

Nearly 50 years after Sandy Koufax declined to pitch the opening game of the 1965 World Series for the Los Angeles Dodgers because it fell on Yom Kippur, foul-mouthed comedian Sarah Silverman went to work on the Day of Atonement.

On Friday night, October 3, as many Jews elsewhere were in synagogue reciting the Kol Nidre service that begins the holy day, Silverman was rehearsing her stint as host of “Saturday Night Live” with fellow cast members. Her prepping for the show continued the next afternoon. The actual broadcast of the show to television viewers, before a live audience, was aired that night, several hours after Yom Kippur ended.

Does that make Silverman the anti-Koufax?

Hard to say. Silverman, who is often identified — and who often publicly identifies herself — as a Jewish comedian, told the Forward through her publicist that she was “not available” for an interview. An NBC spokeswoman also declined comment.

Still, inquiring minds want to know: Did she ask to host on another episode? Has she ever observed Yom Kippur?

Silverman’s manager, Amy Zvi, emailed to say, “Sarah has been very open about not being religious.” Exhibiting a serious grasp of halachic details, Zvi added, “Sundown on Saturday was approximately 6:55 p.m., for those that are keeping such close track. I’m sure the first star was out shortly thereafter.”

But hosting SNL involves rehearsing until 11 p.m. on Friday night and beginning rehearsals at 1 p.m. on Saturday. Given Silverman’s unavailability to answer questions about this, the Forward informed her manager via email that it would “have to report that Silverman, who spends a lot of time identifying herself as a Jew, declined to talk to a Jewish newspaper about working on Yom Kippur.”

Zvi took the statement as a threat “to try to get an interview.” Shortly after the email was sent, Silverman tweeted to her 5.6 million followers that a “writer threatened my manager that if he can’t interview me he’ll EXPOSE the fact that I worked on Yom Kippur HOW ADORABLE IS THAT?” (her caps).

A subsequent tweet said: “I have no religion, silly goose. I tweeted that my religion is science love Kermit & Mr Rogers….”

Reached in Israel, her sister Susan Silverman, a rabbi, responded to requests for comment via email: “My guess is that the Haredi guy who spit on my 11-year-old daughter, Ashira, at the Kotel went to synagogue and fasted. And probably does not spend the kind of time my sister does to bring greater justice and well-being — and heart — to the world. And is probably not even a little funny.”

The reference was to Silverman’s role, with her children, in the campaign by the group Women of the Wall to open up the Western Wall in Jerusalem to public prayer by women. The practice, which was banned until a recent court order, continues to be opposed, sometimes violently, by ultra-Orthodox Jews there.

“At Sinai we all heard God in our own way — and that includes my beautiful sister,” Silverman wrote. “Sarah is one of the few people who can stir our moral consciousness as powerfully as the most heart-grabbing call of the shofar.”

In 2008 Silverman played a leading role in “The Great Schlep,” a political advertising campaign for presidential nominee Barack Obama in which the comedian urged young voters to get their parents and grandparents in Florida to vote for the Democratic candidate. In 2012 she promised to favor the billionaire Republican Party funder Sheldon Adelson with a sexual act if he would contribute to the Obama campaign.

Jews have played a significant role at SNL over the past 40 years, both in front of and behind the cameras. The show was co-created by a Canadian Jew born Lorne Lipowitz who changed his name to Lorne Michaels. From Gilda Radner as the ditzy “Weekend Update” correspondent Emily Litella, who asked in bewilderment during the show’s early years what all the fuss was over “Soviet jewelry,” to Vanessa Bayer’s Jacob the Bar Mitzvah Boy bits in recent seasons, Jewish themes have been a constant on the program.

Internet lists of the best Jewish moments on SNL include Adam Sandler’s “The Hanukkah Song,” which was done on “Weekend Update” in 1994 and became something of a Jewish pride anthem, and the 2005 clay animation music video “Christmastime for the Jews,” in which Darlene Love crooned about “the night the Jews control the town.”

Tom Schiller, an original writer on the show who now makes humorous TV commercials, remembers playing a rabbi in a Hanukkah Harry sketch written by Al Franken and Tom Davis. Hanukkah Harry, of course, gets on a sleigh and gives out gifts during the Festival of Lights. Schiller, whose father wrote for “I Love Lucy,” also made short films for SNL. His first, in 1977, was “The Acid Generation: Where Are They Now?” It featured elderly Jews decades in the future remembering the 1960s.

Schiller attended two SNL Seders in the late 1970s, held on a floor above NBC’s legendary Studio 8H, where the show is performed. The Seders, he said, drew many of the cast’s non-Jews, including Bill Murray, as well as Jews like Radner and Michaels. The show’s pianist, Paul Schaffer, played a little electric piano during the ceremony. Schiller reports that all the men wore yarmulkes.

“We turned it into a laugh a minute, but we still observed it,” Schiller recalled.

Silverman contributed to the tradition of on-the-air Yiddishkeit when she was briefly an SNL cast member during the 1993–94 season. After her sister married entrepreneur Yosef Abramowitz, she appeared on “Weekend Update” and discussed her sister’s original decision to hyphenate her last name as Silverman-Abramowitz, adding that the hyphenated surname may be shortened “to just Jews.”

Paul Krassner, the 82-year-old satirist who co-founded the Youth International Party (Yippies) and was a close friend of the legendary “dirty” comedian Lenny Bruce, is often asked which contemporary comic best embodies the spirit of the brilliant Jewish satirist. Krassner named Silverman as his current choice.

“Her sense of irreverence is in sync with Lenny’s. Like him, she takes risks onstage,” Krassner told the Forward.

Referring to Silverman’s “I was raped by a doctor” joke, Krassner said that she “manages to connect a despicable crime with an age-old stereotype, and get a laugh out of it. That’s her job, taking chances beyond the edge.”

As for her SNL appearance on the live broadcast after Yom Kippur, Bill Adler, a New York pop culture critic, proudly secular Jew and producer of a forthcoming documentary entitled “Unorthodox: Jews Without Religion,” praised Silverman’s shout-out to Hasidim in her opening monologue. In it, Silverman told them: “I promise you, God will not mind if you wear a nice cotton blend in the summer.”

Is Sarah Silverman the Anti-Sandy Koufax?