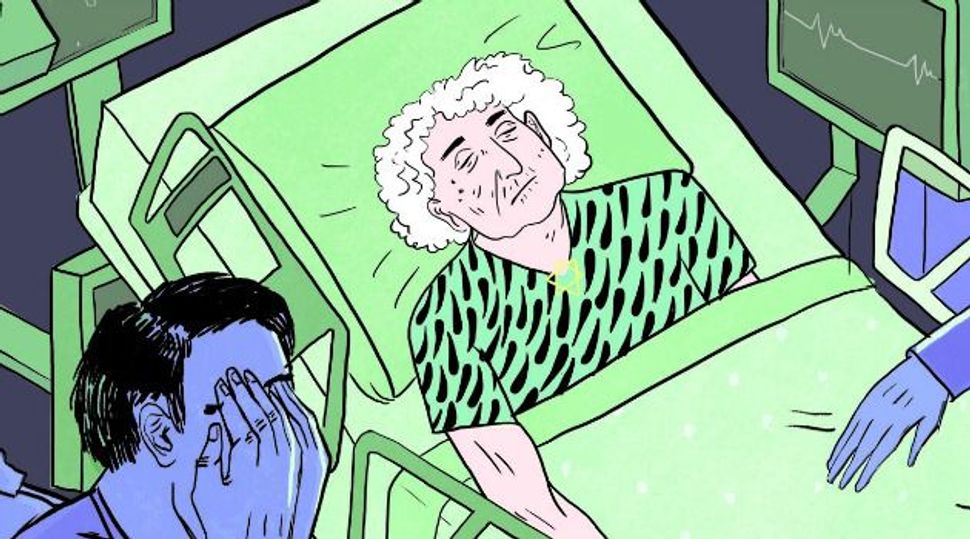 Hard Decisions: Many people try to influence the decisions around death. Image by Lily Padula

Scroll down to tell us your story about making an end-of-life decision for a loved one.

Signing the papers to officially place my father into hospice care was among the most difficult tasks of my life. But it was also one of the most gratifying.

Long before the day arrived, I had begun carrying a tattered copy of his advanced directive in my purse, handy at all times, my compass and guide to the fraught terrain of managing a very sick parent who may be approaching the end of his days. It was, as my sister later recalled, a gift, a clear indication of his wishes should extreme intervention be necessary for a man who had struggled for years with heart disease and what we finally learned was progressive supranuclear palsy.

Whatever your age, wishes or beliefs, you should sign an advanced directive and tell the people closest to you what it says. Withholding this gift may only bestow heartache on those you love.

But the decision over whether to enter hospice elevates the wrenching question of how to die to a more complex level. This is especially so for 21st-century Americans accustomed to going the distance, whatever the likelihood of success, and for a medical establishment incentivized to do what it takes — the clichés are all apt here — and for Jews obliged to treat every moment of life as sacred. We are, as Americans and as Jews, not very good at talking about when to let go.

That is why New York State’s Palliative Care Information Act, and others like it, which oblige health care practitioners to offer information and counseling about palliative care and end-of-life choices to those with a terminal illness or condition, are so necessary. Many physicians and, as we see in Paul Berger’s excellent Forward story this week, some Orthodox Jews opposed the 2011 law for ironically paradoxical reasons. Doctors howl about what they see as the legislature’s heavy-handed intrusion into their professional lives. The Orthodox group, Chayim Aruchim and its patron, Agudath Israel of America, contend that it interferes with rabbinic authority.

Valid concerns. Lawmakers in this country are known to inappropriately, even dangerously butt into deeply personal health-care decisions. (Think of the way Florida state officials in 2003 forced a feeding tube back into Terri Schiavo, who was in a permanent vegetative state and over the objections of her husband. Or, for that matter, the way lawmakers persist in limiting the health perogatives of women.) And we must remain vigilant about attempts to curtail religious freedom.

But both complaints miss the central, heartbreaking point: It’s the patient’s informed wishes that should be paramount. Not the doctor’s. Not the rabbi’s. They can be essential advisers, but ultimately the system must honor what the suffering person wants — whether to prolong treatment in the hope of a cure or a reprieve, however unlikely, or to allow the patient to experience a simple, quiet, pain-free death.

That is what we were able to grant my father. And we could do so because, after listening to the professionals, we listened to him.

I watched carefully how, the previous year, he chose hospice care for my mother, after the Alzheimer’s Disease that corroded her brain and robbed her speech and erased her memory marched through her body to take away her ability to swallow and sustain herself. I heard him tell the rabbi several weeks before she was to die how she should be buried. And I knew, and my sister knew, that whatever he wanted for her, he wanted for himself.

So when the time came for me to meet with the appropriate representative from the nursing home, I knew what to do. I wasn’t imposing a death sentence; that was beyond my, or his, or anyone’s control. I was allowing him some measure of dignity and comfort, two qualities that had been in agonizingly short supply during the last troubling years of his life and which he deserved now in abundance.

Death came weeks later, in its own time, as my father lay in his own bed, surrounded by his children. I had spent the prior night with him, just as I had with my mother the night before she died. This is what hospice afforded us: the privilege of ensuring that our parents were not suffering and were not alone.

These experiences made me passionate about the preferability and the beauty of what some call a good death, and left me determined to advocate for changes in our law, medical practices, reimbursement procedures and in our culture to ensure that others can die this way if they so choose. You may agree. Or you may believe differently.

In any case, the Forward wants to hear your stories. Tell us about a time that you had to make an end-of-life decision for a loved one. Whom did you turn to for advice? Do you think you made the right choice? Looking back, is there anything you would do differently?

Below, you’ll find a brief survey allowing you to send us your stories, a selection of which may be published. We hope to prompt conversation on that most difficult question for the living: How are we to die?

Tell Us Your End-of-Life Story