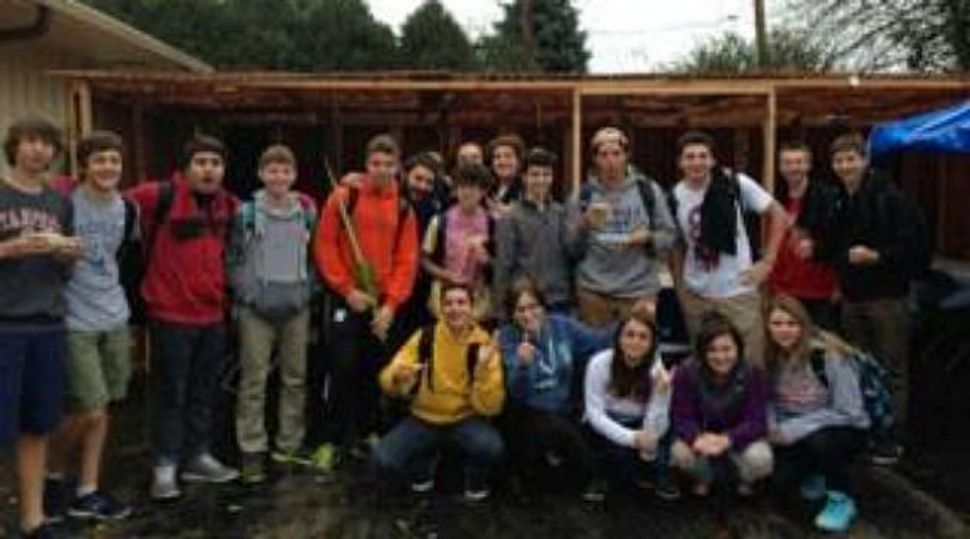 A group of suburban Milwaukee students received an unexpected lesson in Jewish civics this Sukkot when they sought to build a sukkah at their public school for the second straight year.

Administrators at Nicolet High School in Glendale, Wisconsin, allowed the sukkah last year, which Jewish students said provided an opportunity to educate others about Jewish culture. And no students of other faiths complained. Who could see any harm in a sukkah?

The answer: the parents of the Jewish students, and local leaders of Milwaukee’s Jewish community. Their objections led to a flip-flop by the school, which barred the sukkah from being built in its courtyard after allowing it the previous year. The surprised students behind the project were open with their disappointment.

“It all came from the parents or members of the Jewish community,” said Rebecca Perl, 17, a Nicolet senior and a supporter of the on-campus sukkah. “I was kind of shocked because I didn’t really understand why. I still don’t understand why people are complaining.”

In fact, the reasons were grounded in the Jewish critics’ understanding of the U.S. Constitution and the protection they see in its guarantees of separation between religion and state. But rather than using the situation as a teachable moment, school officials sought to downplay the episode.

A call to Nicolet High School’s principal, Greg Kabara, seeking comment on the matter was forwarded to his boss, the district superintendent, who would only answer questions by email that were sent first through Mueller Communications Inc., a local public relations firm.

“After consultation with the Milwaukee Jewish Federation, discussion with parents of Jewish students and a review of the approach taken by neighboring school districts, the district decided to change its policy to no longer permit construction of a sukkah on school grounds,” said Robert Kobylski, superintendent of the Nicolet Union High School District, in the statement eventually issued through this process. “Parents of many Jewish students had encouraged the district to respect the separation of church and state, and raised concern about this practice setting a precedent for religious observations on campus.”

“There really isn’t a story here,” Kahn-Oren said initially in a voicemail left in response to an inquiry from the Forward.

After being pressed further on the matter, Kahn-Oren issued a more detailed formal statement. The bind, she wrote, is the separation of religion and state.

”The challenge of our public high schools is to find the balance between those two principles,” Kahn-Oren’s statement said. “Schools must give students the ability to practice their religion without having school-sanctioned religious observance. We know that the presence of a sukkah on school property may herald the presence of other religious symbols. We must ask ourselves: How would we feel if there was a nativity scene at school? How would we feel if our children’s friends invited them to a warm meal and religious teaching during lunchtime at the crèche?”

So instead of celebrating Sukkot on campus, the students trekked across the street, where they built a sukkah on private property. The school, which educates 1,100 students, has issued off-campus passes to about 45 students, allowing them to leave campus during mealtime to visit the sukkah.

“I’m a little sad about it,” said Leigh Bojan, 15, one of several students who met with Kabara after hearing that a controversy was brewing. But she added that she understood the predicament the principal was in. “He was really supportive… I think he was in a bind,” she said.

Kahn-Oren said that when the sukkah was built on school grounds last year, the Federation received complaints “from students, community members and a couple local rabbis.”

“We spoke with administration, sharing with them the strong American Jewish commitment to the constitutionally mandated separation of religion and state,” she wrote.

Herman Schwartz, a constitutional law expert at American University Washington College of Law, said it is not surprising that the Jewish community raised the church-state issue at Nicolet.

“If you’re a religious minority, then the principle is especially important,” said Schwartz, a national expert in civil rights and civil liberties. “You need the separation. They’re not going to make Judaism a state religion.”

Rabbi Avi Shafran, director of public affairs for the ultra-Orthodox umbrella group Agudath Israel of America, said he understood the parents’ objections, even if some of the students did not.

“They’re kids — they don’t necessarily realize the ramifications of taking a stance,” Shafran said. “You have to have an appreciation for the wall even though it is sometimes too high.”

By moving the sukkah off campus, the students are able to practice their religion without fear of breaching the wall between church and state, Shafran said. Giving up the religious significance of Jewish symbols, such as a sukkah or menorah, so that they could be displayed on public property is “too high of a price to pay,” he added.

“The only way to make it kosher, to justify a menorah or a sukkah [on public property], is to de-religionize it,” Shafran said. “I don’t want a menorah to be a mere cultural symbol.”

That position contrasts starkly with the stance of Shafran’s Orthodox co-religionists in Chabad-Lubavitch, the prominent Hasidic group. Each Hanukkah, local leaders of the group across the country sponsor the erection of Hanukkah menorahs in public spaces as a Jewish cultural symbol during the otherwise Christmas-drenched holiday season.

A spokesman at Chabad’s world headquarters in Brooklyn said he would not be able to provide a comment on the Milwaukee episode in time for this story’s posting.

As for the students, many are just brushing off the controversy. “It got blown out of proportion,” Perl said. But she quickly added that she understood both sides of the issue.

The new location is convenient and is much better than the first alternative students looked at, which would have required them to drive to the sukkah. And, Perl said, the food — provided by anonymous donors — that is being dished up each day has been delicious.

“The sukkah should not be connected to anything negative,” Bojan said in a text message. “Sukkos is a joyous holiday, and we are grateful to have the sukkah.”