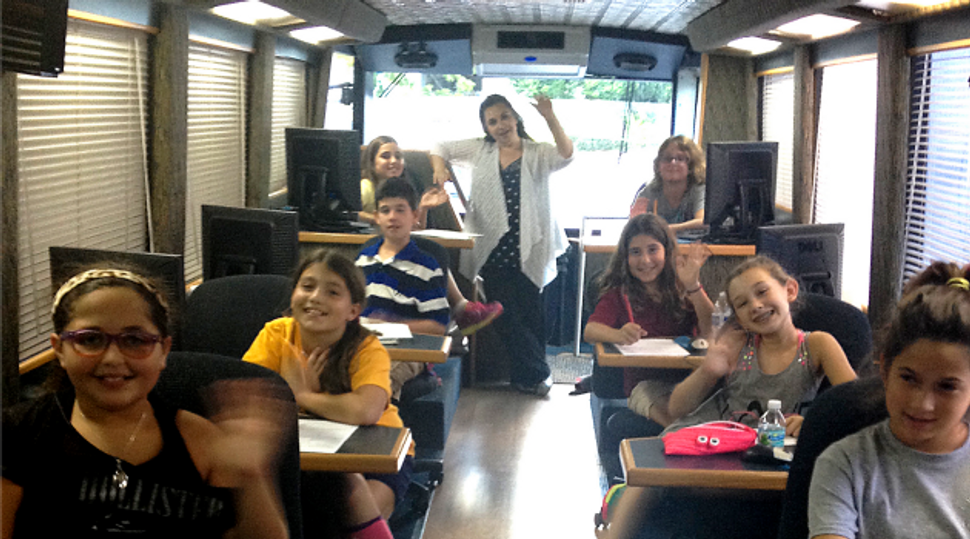 Image by courtesy of debbi ballard

Cantor Debbi Ballard wasn’t reaching as many students as she had hoped to back when she started her own Hebrew school based out of public spaces, like Dunkin’ Donuts, last fall. So this year, Ballard went one step further in her attempt to innovate: She bought a 38-foot recreational vehicle and converted it into a Hebrew school on wheels.

Ballard, who has been running Hebrew schools in South Florida for nearly a decade, figured, what better way to revitalize her Hebrew school students’ engagement with Judaism than by giving them an educational experience they’d never had?

But whether Ballard is innovating a new path in Jewish education, or simply dumbing it down depends on who you ask. The local Chabad rabbi is a fan. But in New York, an education expert from the more religiously liberal Conservative wing of Judaism looks askance at her project.

Ballard’s idea of conducting Hebrew school on a traveling RV, which she has dubbed the EdJewcation station, was inspired by a double-decker bus she saw that had been converted into a coffee shop in Asheville, North Carolina. Ballard and a friend started joking about the concept, brainstorming “and it all stemmed from there,” she recalled.

With some help from supporters on Jewcer, an on-line fundraising site for innovative Jewish ideas, Ballard went out and purchased an RV from a company that taught senior citizens how to use computers on the bus. She kept the 10 computer workstations on the RV so that she could use technology in the classroom. She then set up a schedule to travel from neighborhood to neighborhood in the region, conducting classes wherever she was able to enlist enough students to hold them.

EdJewcation students are primarily in third through seventh grades — since many families no longer want to participate in a synagogue after their bar or bat mitzvah age. At $800 for an academic year, each of Ballard’s 65 students attends a class every other week, which amounts to 20 to 25 classes a year.

It’s an idea that calls to mind the mitzvah mobiles of the Chabad Lubavitch movement, whose members drive the vehicles around metropolitan areas to provide quick lessons in Judaism to passersby. In Ballard’s case, the EdJewcation station drives around South Florida — from Boca Raton to Plantation and all around the area — offering Hebrew school classes geared toward families who don’t want the time commitment of a conventional curriculum, or those who find themselves disenchanted by traditionally structured Judaism. During class time, the RV parks in public lots outside synagogues or shopping centers.

Ballard, 52, received her ordination in 2004 from The New Seminary for Interfaith Studies, in New York, a two-year ordination program for aspiring interfaith ministers whose program, among other things, requires students to immerse themselves in a different faith tradition each month. It is a program outside mainstream Judaism, which may in part explain Ballard’s own thinking.

Rabbi Hershy Bronstein, leader of the Chai Center-Chabad, in Coral Springs — and an emphatically traditional rabbi — is impressed.

“Anything that could bring Judaism to a person that, for whatever reason, doesn’t have access is a great thing,” he told the local Sun Sentinel newspaper. “It’s exactly what is needed. My kudos to her.”

But Barry Holtz, a professor of Jewish Education at the Jewish Theological Seminary of America in New York, disagrees. “On the surface this is an absurd idea,” he said, contending that the amount of time EdJewcation devotes to teaching is not sufficient for a Jewish education.

“We know from research both in Jewish and general education that — not surprisingly— there is pretty much a clear correspondence between the hours of instruction and the impact of education,” said Holtz.

Ballard sees herself as part of an unofficial nationwide movement to make Hebrew school more fun.

According to last October’s Pew Research Study on American Jewry, 67% of Jews who grew up in Generation X say they have participated in some sort of Jewish education. But now, only 50% of children are enrolled in any sort of formal Jewish education — whether schools, extracurricular programs or camps.

With upward of 610,000 Jews statewide, according to the latest census, Florida is home to 12% of America’s identifying Jewish population, which is why Ballard’s isn’t the only alternative Hebrew school opening in Florida this year.

The Chabad-run interdenominational Hebrew School of the Arts, in Tampa Bay offers an arts-based curriculum, including painting, that teaches 6-to-12-year-olds Hebrew, Torah and Jewish history while exploring Jewish cultural values. In contrast to the EdJewcation station, The Hebrew School of the Arts meets every Sunday for 90 minutes from September through May.

More formal educational institutes in Florida are using creative ways to get students more actively engaged in their Jewish education. The curriculum of the new Hillel Day School, an elementary school in Boca Raton that was modeled after New York’s SAR Academy High School, integrates technology in the classroom, such as iPads and electronic homework, and creative teaching methods, such as experiential learning.

The question remains whether or not these new education tactics will be enough to retain these children in the Jewish community once they graduate into the adult world.

“My first bar mitzvah students are just starting to graduate from college,” Ballard said. “My hope for them is that they’ll continue to engage with their Jewishness past every new stage in their lives.” 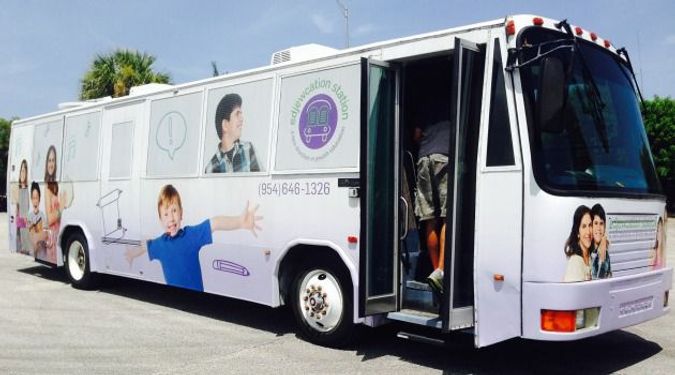