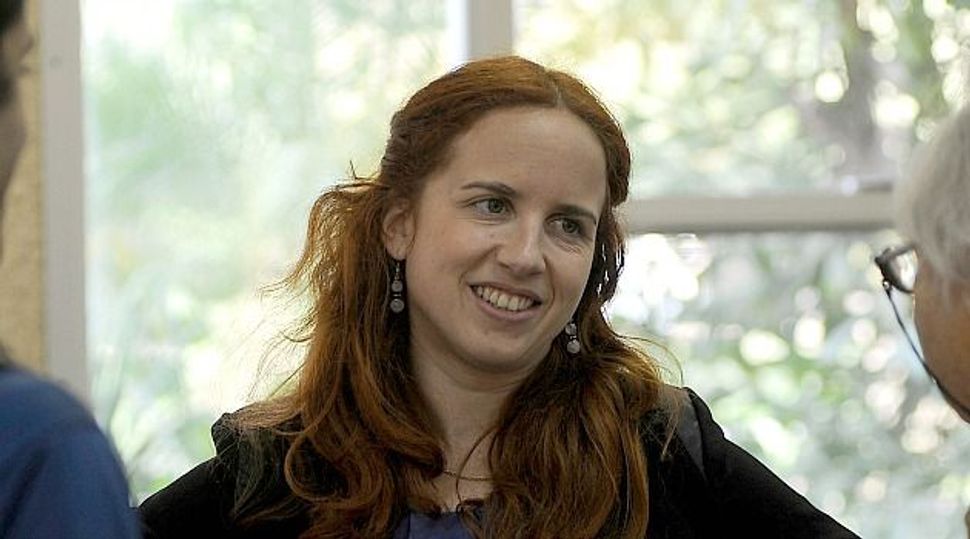 Having coffee with Stav Shaffir is little different from meeting up with other 20-somethings in Tel Aviv.

She rushes into the cafe a few minutes late, glances repeatedly at her phone and complains about high rents and an out-of-touch government. It’s hard, she says, being the youngest woman in a workplace full of older men.

The only difference: The workplace is the Knesset and Shaffir, 29, is the youngest female lawmaker in Israel’s history.

“The problem in my generation is we were scared of politics,” Shaffir said. “We said that everyone is corrupt and we can’t talk and we can’t go into politics, but that’s what a corrupt system wants us to think. They want us to believe there’s no chance.”

A journalist turned activist turned politician, Shaffir first came to national prominence as the voice of the 2011 social justice protests, which saw hundreds of thousands of Israelis take to the streets to demand a lower cost of living and a broader social safety net.

Since entering the Knesset last year, she has made fiscal transparency her crusade and developed a reputation as a rabble-rouser eager to shake up the way the government does business.

On Oct. 6, Shaffir was dragged from a Finance Committee meeting by a guard while screaming “The public doesn’t know what you’re doing!” at committee chair Nissan Slomiansky. Shaffir was objecting to a motion that would have moved money between government departments without a full Knesset vote.

Shaffir has held up committee meetings repeatedly over such motions, which she says result in a budget radically different from the one passed by the Knesset at the beginning of the year. Twice this year Slomiansky has kicked Shaffir out of meetings.

“If we don’t fight for the state, it might not be,” said Shaffir, a Labor Party member and alternate member of the Finance Committee. “That’s a big civic responsibility. This is our state, and the state needs to take more responsibility for its people.”

Shaffir is no quieter on her Facebook page, where she posts near-daily polemics railing against the government’s financial decisions and budgetary procedures. Many of the posts are accompanied by shots of newspaper articles in which she is featured, her bright red hair and indignant facial expression filling the photo.

She has been so unyielding that even some fellow lawmakers who share her concerns fear Shaffir’s theatrics might be doing more harm than good.

“It’s important that she question everything, but she’s ready to hurt the state for this noise she makes,” said Boaz Toporovsky, a fellow freshman lawmaker and member of the centrist Yesh Atid party who, like Shaffir, supports greater financial transparency. “That crosses the line.”

Raised in the coastal city of Netanya, Shaffir did a year of service work with the Society for the Protection of Nature in Israel before joining the army. After her discharge, she participated in an Israeli-Palestinian study program at the City University of London.

By 2011, she had become a travel journalist, writing articles about tourist sites around Israel as well as a series on hitchhiking around Europe on a budget. In July of that year, when the protests broke out, she wrote an article about Daphne Leef, one of the protest organizers.

Within two months, Shaffir had moved from writing articles to being quoted in them as one of the movement’s leaders. A speech she gave at an August demonstration was a fiery mix of passion and indignation over the way a country founded on socialist ideals had devolved into a government run by narrow interest groups jostling for power.

Three years later, the high cost of living remains a potent issue, again grabbing headlines this month when an Israeli publicized that the German version of a popular local pudding cost one-third of the price in Berlin. But while the protests have succeeded in putting the issue on the public agenda, Shaffir says little has changed. For that, she needed to run for office.

Shaffir entered what she calls “the world of suits” last year, part of a wave of young legislators galvanized by the 2011 protests. Being the Knesset’s youngest woman has been challenging. Some legislators take her less seriously, she says. But renting a room in a Tel Aviv apartment also keeps her in touch with her constituency.

“Women who get to these places always need to work harder,” she said. “We need to prove ourselves more. If I make a mistake they’ll say, ‘She’s young, she doesn’t understand.’ ”

Since being elected, Shaffir has followed the money. She says showing the public how funds are spent, and exposing the small interest groups that seek back-room changes to the budget, is the silver bullet for any number of problems — including Israeli-Palestinian peace. According to her office, nearly $250 million has been transferred to Israeli West Bank settlements over the past year.

“At the beginning I thought my job was to legislate,” Shaffir said. “When I entered the system, I understood until we change the mechanism, nothing will change.”

Because she’s a member of the opposition, many of Shaffir’s efforts have been in vain, though she has made some gains.

The Supreme Court has ordered the Finance Ministry to work with her to make budget transfers in the Finance Committee more transparent, a process she says is moving too slowly. And she has drafted a wide coalition of opposition lawmakers to demand that Slomiansky not be allowed to preside over meetings that transfer money to Israeli Jewish settlements.

Earlier this year, a left-wing think tank exposed that the money was winding up with NGOs headed by officials from Slomiansky’s rightist Jewish Home party, which advocates increased Israeli building in the West Bank.

“It’s better to try and take a risk than not to try,” Shaffir says. “I can’t live here without fighting every day until I can change the state into a place where it’s better to raise children, that realizes the principles it was founded on.”