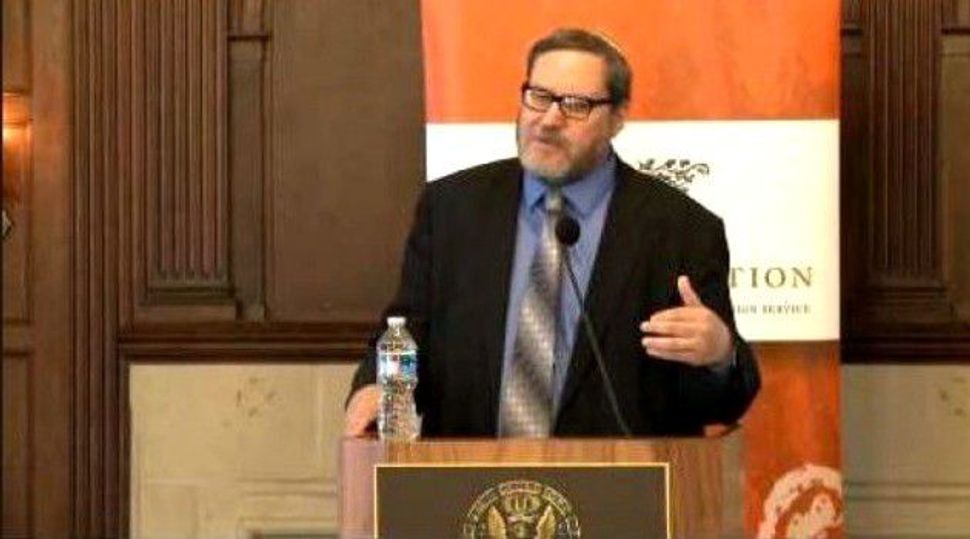 There is no playbook guiding Modern Orthodox congregations on what to do when their rabbi is accused of abusing congregants and of violating their privacy at the most holy and intimate of moments.

But when the venerable Washington congregation Kesher Israel got the news on October 14 that its spiritual leader of more than 26 years had been arrested on just such charges, its members didn’t hesitate: First, the board voted unanimously to suspend Rabbi Barry Freundel. Then, the very next night, its members gathered to dance in the street, as Jewish tradition demands, to celebrate their completion of the yearly cycle of reading the Torah.

“We will celebrate, dance, sing,” said Kesher’s president, Elanit Jakabovics, as she urged congregants to fulfill the calling to be joyous on Simchat Torah.

None of this was meant to mask or paper over the sense of utter shock that swept across the pews at the small but prominent synagogue in the upscale Washington neighborhood of Georgetown during the long holiday weekend of which Simchat Torah was a part. Freundel, according to the charges connected to his arrest, had used a hidden camera in the synagogue’s mikveh, or ritual bath, to record videos of female congregants and other women as they disrobed to submerge themselves in its waters.

In rushed consultations on October 15, the day after Freundel’s arrest, and in discussions between prayers during the long holiday weekend that immediately followed of Shemini Atzeret, Simchat Torah and the Sabbath, a strategy was formed. It required immediately turning the community’s back on Freundel and directing all attention to the victims of his actions.

“These sacred spaces — our shul and our mikveh — have now been tarnished. Our inviolability has been violated,” Jakabovics told the congregation in her October 16 address to the community. But she also delivered a promise: “Kesher and the mikveh will be a safe place again.”

Jakabovics’s dramatic speech, delivered during the Shemini Atzeret service, capped what must have seemed like a surrealistic two and a half weeks for the synagogue’s leadership amid the sacred days of repentance that began with Rosh Hashanah on the evening of September 24. It was just four days later, between Rosh Hashanah and Yom Kippur, that Jakabovics was told that a witness had seen Freundel plug in and leave a strange clock in the mikveh the previous day that was then gone by the evening.

Kesher Israel’s mikveh is the only Orthodox ritual bath in DC. It is thus used by traditionally observant women across the area to consecrate the end of their menstrual periods, in accordance with the Torah’s laws of ritual purity. Men and women undergoing conversion to Judaism also use it as part of the conversion ritual.

As the board explained in a later notice to congregants, on being informed about the strange-looking clock, the synagogue and the mikveh, which are associated but independently incorporated, immediately retained separate counsel and began to investigate. Already fearful that the clock’s presence suggested some kind of privacy invasion, they also began to inspect the mikveh preparation rooms every time the bath was scheduled for use.

For those in the know, the issue remained a live and troubling mystery even as Freundel took to the synagogue’s bimah to begin leading the solemn Kol Nidre service for Yom Kippur, which many Jews regard as the holiest day of the year, on the night of October 3. The mystery remained unresolved as Freundel, who was not informed of the investigation, led the congregation at Sukkot services one week later.

On October 12, the clock suddenly reappeared in the mikveh preparation room, according to the board’s account. Synagogue officials immediately removed it and gave it to the District police. Two days later, the police came to Freundel’s home, where they arrested him and took his home computers for examination. Freundel pleaded not guilty to charges of voyeurism at an arraignment on October 15.

What followed for the congregation was a long process of communal discussion that is ongoing.

On the night of October 20, Kesher’s sanctuary was packed once again. But on this night, women, usually confined to the upper gallery, sat next to men on the lower level, as congregants listened to the District police chief, Cathy Lanier, and senior officials from the U.S. attorney’s office describe the details of the case. The law enforcement officials promised congregants that all resources would be made available to fully investigate and prosecute the case.

“It was important for the community to see the chief of police sitting on the same bimah where Rabbi Freundel sat only a week ago,” one attendee said after the meeting, which was closed to media coverage. The officials related details about the evidence found on Freundel’s computer, where the rabbi stored images of women secretly taped while they were at the mikveh.

There were many wet eyes in the audience, according to participants. Perhaps it was the fact that in the very same hall where they had just spent days praying, women were being asked by the city’s top police officer to send in photos of their faces if they believed their privacy had been violated. Forensic technicians would examine the photos, Lanier promised, to determine whether they had been among Freundel’s victims.

There were some smaller gatherings as well, including one arranged for women only. Another was specifically for women converted by Freundel. And yet another will soon take place with the leadership of the Rabbinical Council of America, Modern Orthodoxy’s national rabbinic association, to discuss Freundel’s conversions.

Members of Kesher were reluctant to talk to reporters. The synagogue leadership has taken a decision not to speak publicly beyond the address given by Jakabovics. But in conversations with the Forward, members expressed relief that the congregation had taken such a prompt and clear decision to sever ties with Freundel. Given his long leadership of the community, the lack of any opposition to the board’s action was notable.

Some attributed this to the compelling evidence, which reportedly includes video footage of Freundel taken by the very motion-activated hidden camera he hid in the mikveh as he came in to adjust it. This combined with the profoundly offensive nature of the offense, leaving many in the community with the sense that they had been personally violated. “Mikveh is an intensely sacred private ritual space,”Jakabovics said. “It is also supposed to be a sanctuary.”

Still, there was something unusual about the kind of relationship Kesher members had with their rabbi. In his 26-year tenure at the synagogue, Freundel was praised often as an intellectual rabbi, a scholar of Jewish law and an expert on Jewish ethics. Freundel was the brain, all agreed, but not necessarily the heart. Some described him as aloof and lacking warmth, qualities that may have made the community’s break with him easier.

That contrasted with Freundel’s predecessor, Rabbi Philip Rabinowitz, whom Freundel succeeded in 1987. During his 34 years as the congregation’s spiritual leader, Rabinowitz brought to Kesher more of an Old World Eastern European pastoral style that focused on building the community and he excelled in human relations. His tragic and unsolved murder left the Modern Orthodox community shocked, and led the way to Freundel’s era at Kesher’s helm.

Freundel was seen as an institution builder more than as a community builder. It was he who initiated construction of the mikveh and set up the synagogue neighborhood’s first ever eruv, an unbroken line of wire around the synagogue neighborhood’s perimeter that allows the space within it to be considered as an enclosed area under Jewish law, so that Jews can wheel baby carriages and carry personal items to synagogue on the Sabbath without violating it.

Freundel was known for being a stickler on matters of Orthodoxy. Among other things, he refused to eat food under the kosher certificate of nearby Baltimore rabbinic authorities who, he claimed, were not as strict as the rabbis in Washington. He also called on congregation members to avoid eating at a vegan falafel restaurant that carried a Conservative kosher certificate.

Kesher, which celebrated its 100th anniversary in 2011, has seen many ups and downs over its lifetime. After its inauguration, it gradually expanded Orthodox Judaism’s presence in the nation’s capital, but later it experienced an era of decline when Jewish families moved to the suburbs. More recently, it has enjoyed another wave of growth as young professionals moved back in to Georgetown.

Yet the small corner building, a far cry from the grand synagogues in many big American cities, always remained a modest and intimate structure. “The best little shul in America,” author Herman Wouk, one of Kesher’s prominent members, called it. For Kesher, it was never about size.

As in other leading Washington’s synagogues, what made a house of worship was its roster of movers and shakers attending Kol Nidre. For Kesher this meant not only Wouk and The New Republic’s famous literary editor, Leon Wieseltier, but also Jewish politicians who sought a Modern Orthodox setting. Former senator Joe Lieberman brought national attention to Kesher during his 2000 run for vice president, as the nation learned of his walk to Congress from the synagogue when important votes took place on the Sabbath. Today, Treasury Secretary Jack Lew is among the synagogue’s regulars.

Following the Freundel affair, some sensed an attempt to challenge Kesher’s hegemony. As the congregation sought to deal with the news, another Modern Orthodox synagogue, Ohev Shalom, located farther away from downtown Washington, announced it was organizing its own meeting with Lanier to discuss the Freundel investigation. Kesher leaders were furious and reached out to Rabbi Shmuel Herzfeld, Ohev Shalom’s senior rabbi, to ask to co-host the meeting. They also requested that it be held at Kesher, for the benefit of community members who are Freundel’s potential victims.

According to sources close to the exchange, Herzfeld refused.

“It is un-rabbinical and unbelievable that in our time of need he has an event that is not coordinated with Kesher,” one member involved in the talks said. The feeling among Kesher Israel members, he added, was that Herzfeld is “trying to cash in” on the tragedy and position his synagogue as the leading Orthodox one in town.

Herzfeld declined to comment, saying in an email to the Forward that his “sole focus now is on helping the victims.”

Freundel and Herzfeld had been at odds for years over their clashing interpretations of Orthodox tradition. Freundel was seen as a hard-liner who rejected the inclusion of women in clergy and of leniency in conversion. Herzfeld, a disciple of the New York rabbi Avi Weiss, a leader of the more liberal Open Orthodox movement, supported a more innovative approach. Among other things, Herzfeld brought in an ordained female clergy, known as a maharat, to help him lead the synagogue.

But Orthodox turf wars are the least of Kesher’s concerns right now. Its next step will be to find a new rabbi.