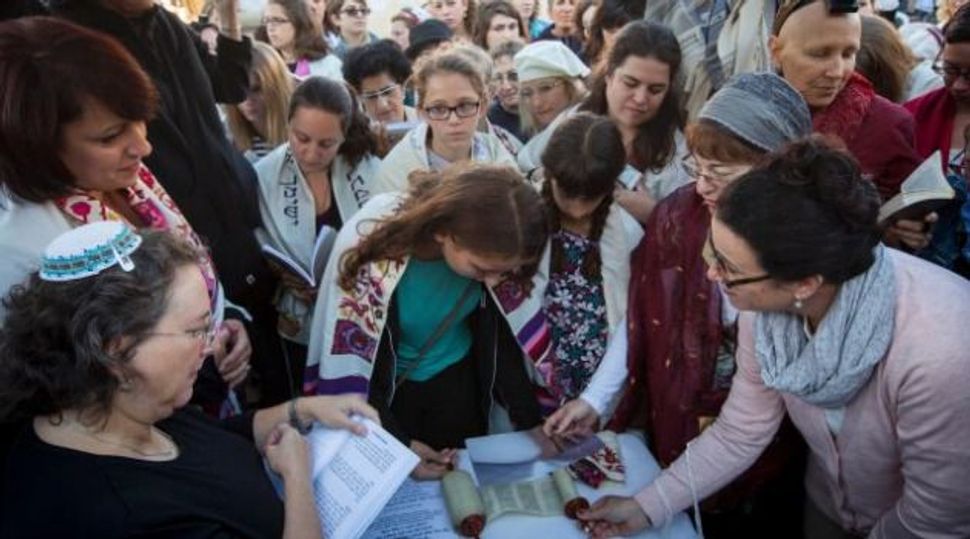 (Haaretz) — Defying regulations by Western Wall rabbinic authorities, members of Women of the Wall smuggled a tiny Torah scroll into the women’s section of the Kotel Friday morning, in what the feminist prayer group said was the first reading from the Torah by women at the holy site in 25 years.

The tiny scroll, measuring just 28 centimeters in length, was smuggled inside in a talit bag an hour before the group, which numbered around 100 worshippers, began their monthly prayer service on the first day of the Jewish month.

During the service, Sasha Lutt, a 12-year-old girl from Be’er Sheva, read from the Torah with a piece of magnifying plastic as part of her bat mitzvah, marking the first time a ‘full’ bat mitzvah ceremony has ever been held at the Kotel, Women of the Wall said. “I feel happy that I had a real Bat Mitzvah, and not just a party,” Lutt said to Haaretz after the service.

The Western Wall Heritage Foundation does not allow worshippers to bring their own Torah scrolls to the premises. About 300 Torah scrolls are stored in the men’s section at the wall for use during male-led services, but Rabbi Shmuel Rabinowitz, who heads the foundation, has not allowed Women of the Wall to make use of one of the scrolls at their own services in the women’s section. The group has tried to sneak in Torah scrolls in the past, with little success.

Earlier on Friday morning, the group tried to walk through the Mughrabi Gate entrance to the Kotel while one of their members was holding a Torah scroll, but were stopped by security guards and police, who told them it was against the rules to bring in scrolls from outside. After a back-and-forth amid a heavy media presence, the activists demanded to see Rabinowitz and ask him to use one of the Kotel’s scrolls. They were told that the rabbi was not there. In the end, they backed down and entered without the scroll.

In the middle of the services in the women’s section, however, the activists held up a tzitit and laid out the tiny Torah scroll they had smuggled in earlier on a table underneath it. A couple of policemen looked on from the side throughout, but did not interrupt the services.

Lesley Sachs, the executive director of Women of the Wall, said that this marked the first time in 25 years that women have read from the Torah at the holy site. “I’m just so excited, this is just something so obvious and natural, and it is unbelievable that we had to sneak it in.”

Having managed to sneak in the scroll, will Women of the Wall smuggle it in every Rosh Chodesh? “Hopefully, we have to see. We have to be so creative every month, it’s just unacceptable,” said Lesley Sachs.

Rabbi Rabinowitz, in a statement, condemned the group for carrying out what he called “a deception,” according to the Ynet news website. “A small group of Women of the Wall carried out a deception this morning; after they were prevented from entering with a large Torah scroll – they cunningly took a small Torah into the women’s section [of the Western Wall],” Ynet cited him as saying.