Ukraine’s Election Results Are Good for the Jews — But What Comes Next? 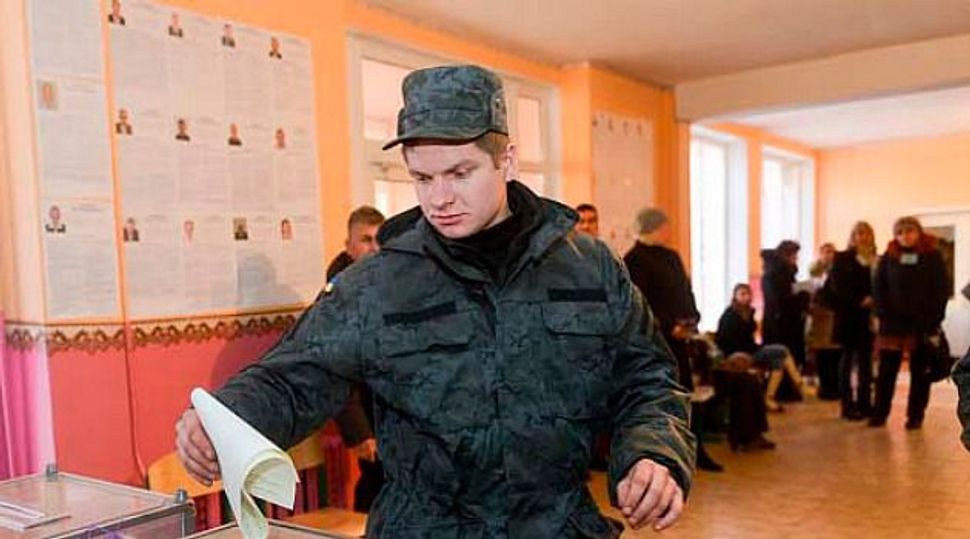 Vote: A Ukrainian soldier casts vote in recent elections. The vote offered a strong mandate to the pro-Western government — and a setback to anti-Semitic nationalists. Image by getty images

Ukraine’s parliamentary election delivered a stinging rebuttal to Russia’s claims that this year’s pro-Western revolution was galvanized by fascism and anti-Semitism.

Far-right and nationalist parties, long singled out by Russia as prime evidence of the revolution’s extremist character, suffered a series of stunning setbacks.

The nationalist Svoboda party, which two years ago won more than 10% of the vote, failed to reach the 5% threshold necessary to win seats in parliament. The newly formed Radical Party, led by the firebrand Oleg Lyashko, had been widely tipped to emerge as the country’s second-largest party. But it came in fifth, with less than 8% of the vote.

Sam Kliger, director of Russian Jewish community affairs at the American Jewish Committee, said this was the first Ukrainian election he could remember in which no political party had played the anti-Semitic card. Kliger, who recently returned from several months in Ukraine, said that if anything, the election’s big winners were “mostly philosemitic rather than anti-Semitic.”

There were several anti-Semitic incidents in towns and cities across Ukraine during and after this year’s revolution. They included physical attacks on Jews, and the firebombing or vandalism of synagogues.

But Ukrainian Jewish leaders said the attacks had nothing to do with the revolution and that the revolution was neither fascistic nor anti-Semitic. “It’s all a lie,” said Josef Zissels, chairman of the Association of Jewish Organizations and Communities of Ukraine, in a phone interview from Kiev on October 28.

No one has been arrested for any of the attacks. But Anton Shekhovtsov, an expert on the European far right, said that Ukrainian nationalists do differ from the majority of far-right parties in Europe. Shekhovtsov, a research fellow at the Institute for Human Sciences, in Vienna, said that for Ukrainian nationalists the enemy is “not national minorities, not immigrants, but the Kremlin.”

Ukraine has a mixed parliamentary election system. Half of the seats up for grabs in the October 26 election were based on party lists. The other half were based on direct elections in individual districts. Though the nationalist Svoboda party failed to reach the threshold for entering parliament on the basis of the party list poll, six of its candidates did win seats running in individual districts.

Vyacheslav Likhachev, an expert on anti-Semitism for the Euro-Asian Jewish Congress, said that in total there would be 13 ”radical” politicians in the new Ukrainian parliament.

As if to underline the complexity of Ukrainian history and politics, one of those radicals includes Borislav Bereza, a member of the far-right group Right Sector, who is also a Jew.

Although radicals are fewer in number, Likhachev said those extremists who won seats threaten to be more extreme than before. He said that out of the 450 members of the previous Ukrainian parliament, only one could have been described as a neo-Nazi. For the new parliament, Likhachev said, “I think three from this group could be identified as neo-Nazi.”

Russian aggression appears to have played a large part in boosting the popularity of moderate, pro-Western parties. Russia’s annexation of Crimea in March, its support of pro-Russian separatists in East Ukraine and its threats to cut off Ukraine’s gas supply cast a patriotic glow over pro-Western politicians who oppose Putin. That left less room for the strident nationalism of groups such as Svoboda and Lyashko’s Radical Party.

Nationalist groups might have performed even worse in this election had Crimea and separatist-controlled areas of eastern Ukraine, with several million voters combined, been able to take part in the election. Historically, those regions were strongholds of the Communist Party and of former president Yanukovych’s Party of Regions.

Although the war cut into nationalist support, it also made heroes out of some far-right nationalists. The ill-equipped Ukrainian army relied on voluntary battalions during much of the fighting in the East. One of the winning candidates in this parliamentary election, Andriy Biletsky, was commander of the fascistic Azov Battalion, which fights under a symbol similar to the Wolfsangel insignia worn by Waffen-SS units during World War II.

Even so, observers noted the almost total absence from the election campaign of anti-Semitism. Candidates widely known to be Jewish ran with no problems on several party tickets or as independents. They included Vadim Rabinovich, head of the All-Ukrainian Jewish Congress, who won a seat on the Opposition Bloc ticket, made up mostly of former supporters of deposed president Yanukovych.

“The Jews are not a useful enemy at this time,” said David Fishman, an expert on the Former Soviet Union at the Jewish Theological Seminary, in New York. “You are not going to gain votes, and there is no public appetite for anti-Semitism now.”

Fishman added that it is hard to paint Jews as unpatriotic when one of the most famous Jews in Ukraine, the oligarch Igor Kolomoisky, is “a model of Ukrainian patriotism.”

Kolomoisky, governor of Dnipropetrovsk, has maintained calm in the vast industrial region he controls in the East, less than 200 miles from separatist-controlled Donetsk. Kolomoisky also arms and finances volunteers fighting pro-Russian separatists.

Rabbi Andrew Baker, director of international Jewish affairs for the American Jewish Committee, said that throughout this year, most Jewish leaders in Ukraine have been “guardedly optimistic” that a new government could “pave the way for an even more open, inclusive, pluralistic Ukrainian society.”

“I think there are a lot of reasons to share the optimism Ukrainian Jews feel with the election results,” Baker said.

But Baker also struck a note of caution. Ukraine faces a battery of problems, he noted. Its economy is contracting. Inflation is at 14%. Vast swathes of East Ukraine remain under the control of pro-Russian rebels. Russia itself continues to threaten military and economic action. And corruption is endemic.

The results of the election point in one direction. The question is, will events on the ground follow.

Ukraine’s Election Results Are Good for the Jews — But What Comes Next?