Free To Be You and Me and Jonathan Lethem 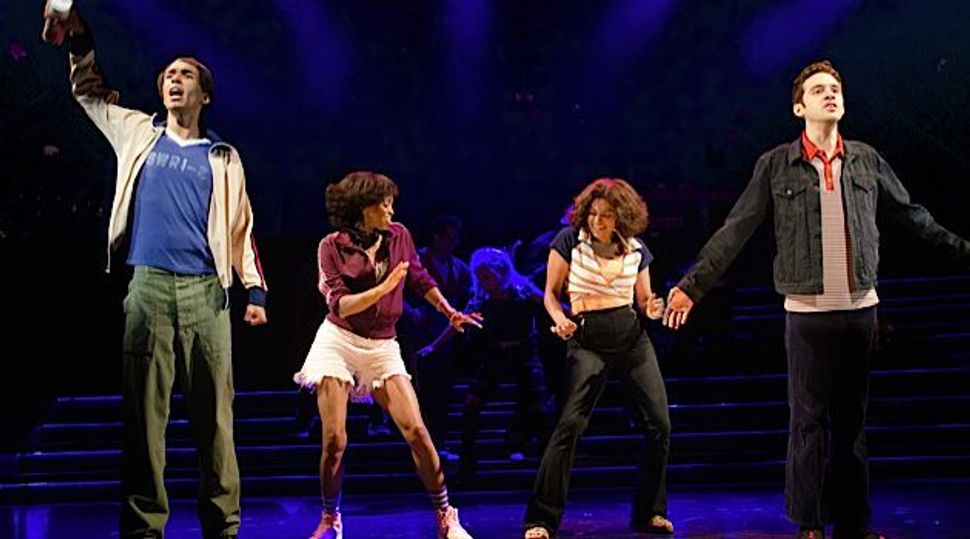 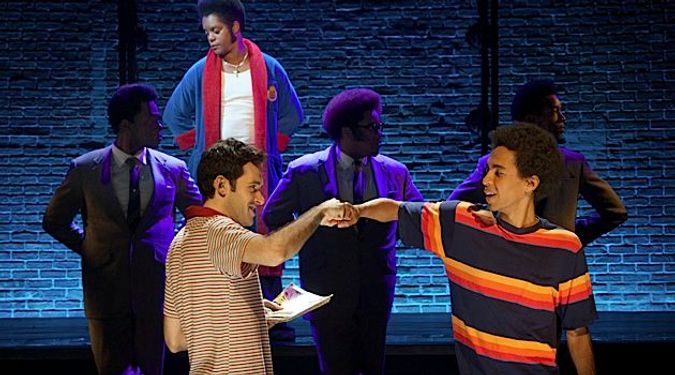 When I heard that The Public Theater was mounting a musical adaptation of Jonathan Lethem’s “The Fortress of Solitude,” I was skeptical of what kind of hot mess it might become. I’d read the book when it came out in 2003 and deeply admired both its encyclopedic evocation of 1970s Brooklyn and its astute understanding of the way race, class and culture collide and diverge as gentrification occurs. But its structure didn’t seem to lend itself naturally to the stage.

The story and style of the book are divided into two unequal parts; it uses lyrical collages of moments to allow the story to accumulate at first, and then stylistically juxtaposes this with an analytical present-day narrative that challenges and complicates the initial idyllic story. Also, it is very sad. The intellectualized, discursive tone of the book, the bleak fates of the characters, and the lack of a traditional plot in any real sense seemed at odds with the traditional limits of musical theater.

What I hadn’t expected was that Itamar Moses, Michael Friedman and Daniel Aukin (the collaborative team responsible for this production) and their exceptionally versatile cast would be so willing to overturn the expectations of musical theater in service to a faithful representation of the book. Instead of the oversimplified retread of the clichés and signifiers of hipster Brooklyn that this show could have been, they’ve created a nuanced, moving elegy to a moment in American history when the very future of the country was at stake, a moment in which, as the chorus of “The One I Remember,” the big first number in the show, explains, “everybody’s singing a different song/ but if we all sing together/ then it can’t be wrong.” Heightening the political undercurrents of the show, they gesture toward a fresh theatrical aesthetic that contains the possibility of transforming this crusty art form into something relevant, urgent and alive again.

Moses, Friedman and Aukin announce in the very first scene that this show will be different from the standard musical. Instead of presenting discreet scenes that move the plot forward a tic at a time, they tell the story through the music, allowing us to experience the lives of the characters via a shifting soundscape that follows an intuitive, emotional logic. 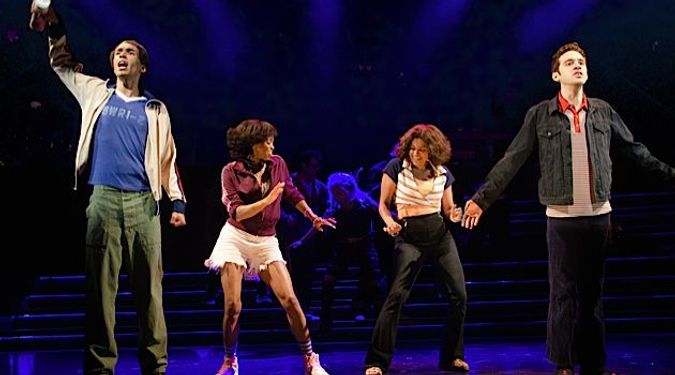 The songs frame the scenes, not vice versa. In the very first number, they take us through the arrival of Dylan Edbus (Adam Chanler-Berat) on Dean Street, his initial encounters with the other kids in the neighborhood, and his mother’s restless, reckless decision to abandon the family for the West Coast. Instead of dramatizing these events, they evoke the characters’ experiences with music and then juxtapose the clashing songs against each other. By the end of the show, everything from soul, rhythm and blues, funk, folk, early ’70s singer-songwriter tunes, punk and rap, as well as call-outs to particular songs — Peter, Paul and Mary’s “Leaving on a Jet Plane,” to Wild Cherry’s “Play that Funky Music, White Boy,” to Talking Heads, Run-DMC and the Beastie Boys, among others — become filtered into the musical score the way a mix-master might sample and cut records into a rap song.

The New York of the ’70s and early ’80s slides past us, evoked through the music as well as by visual and textual references to the benchmark pop signifiers of the times (Spaldeens, boom boxes, record scratching, pennant races, Son of Sam). Up until the final movement of the first act, we in the audience are taken with Dylan on a powerfully nostalgic trip through those rough, hopeful times.

Amid this cultural history, things happen. The first act evokes the childhood friendship between the two protagonists: Dylan, a casually Jewish kid whose idealistic parents move him into the black neighborhood of Gowanus in a kind of personal experiment in integration, and Mingus Rude (Kyle Beltran), the son of a second-tier soul singer who lives up the block with his famous father, Barrett Rude Junior (Kevin Mambo) and eventually, his tyrannical grandfather, Barrett Rude Senior, a preacher in the fire and brimstone vein played by the legendary André De Shields. Both boys have lost their mothers. They’re sensitive, fragile and artistically inclined. Mingus teaches Dylan how to tag walls. Dylan carries his mother’s wedding ring around with him, refusing to believe she’s gone for good. They create an alternate reality for themselves, one in which the ring allows them to fly, unstoppable, together.

What occurs next is as simple as it is typical. Dylan takes the Specialized High School Admissions Test and is accepted at Stuyvesant High School. Turns out, he was always a tourist on Dean Street, whether he knew it at the time or not. He was separated by his race, yes, but more crucially, and cruelly, he was separated by his cultural and economic advantages. Even Arthur Lomb (David Rossmer), the other, more ethnically Jewish boy who lives on the block turns out to be more a part of the neighborhood than Dylan. When Dylan gets into Stuyvesant, we in the audience come to understand that the influence of his absent mother’s educated idealism and his artist father’s work as a designer of book covers must have set a tone of entitled difference for him. Dylan’s father, making the liberal mistake of believing equality of opportunity amounts to equality of outcome, may tell Mingus’s father that “anybody can take the test,” but as Mingus’s father and the audience know, not anyone can pass the test, and who can and who can’t is determined as much by socio-economics as it is by careful study.

Dylan and Mingus’s paths diverge like the tines of a divining rod. The tough, gritty instability of the neighborhood becomes a backdrop for Dylan’s new society of striving achievers. Mingus is doing the best he can with the choices available to him — he finds a role for himself in the hood selling drugs and eventually, during a domestic dispute in which he’s called upon to protect his father, shoots his grandfather dead.

After an interlude in which Dylan uses his considerable critical skills to contextualize the career of Mingus’s father, Barrett Rude Junior (and we in the audience are treated to a medley of Barrett’s hits — all of which, as performed by Kevin Mambo, could easily have landed on the real pop and R&B charts), Act Two assesses what happened to this friendship.

Returning from Berkeley, California, where he’s run from his past, Dylan takes a tour of the hood, soaking in the way gentrification has changed it. He wants to make amends. He’s haunted by the way Mingus protected him and wants some sort of nebulous forgiveness from Mingus for not having been able to protect him back. He wants to give Mingus the ring. Eventually, he learns Mingus is in prison upstate. He pays a visit.

But Mingus doesn’t want the ring. Of course. Why would he?

And this is where “The Fortress of Solitude” pulls off its trickiest feat. It allows us to see two mutually exclusive emotional realities simultaneously. We understand that Dylan’s need to give Mingus the ring is crucial to his ability to come to terms with his past and become a fully functional adult. At the same time, and without lessening Dylan’s emotional integrity as a character, we understand how naïve he is and how condescending it must seem to Mingus to have some kid he hasn’t seen in decades try to solve his relatively minor problems with a melodramatic gesture like this.

Though Mingus’s friendship helped Dylan in crucial ways, Dylan is unable to offer any help to Mingus. And the show refuses to release us from this fact. Our allegiance bounces back and forth between the two characters, futilely. We ache. And when we cry for Dylan and Mingus and their lost connection, we’re also crying for America, for the dream of a better, more equal society that seemed so close to coming true until we woke up and realized it never would, and that the fault was largely our own.

Over and over again, “The Fortress of Solitude” forces the audience to confront what I believe is the single most important question facing America today:

How did we go from that riotous place where everyone was in everyone else’s face, offending, maybe threatening, but also listening, absorbing, struggling to understand, a place where true social and political change seemed to lurk in the shadows just around the next abandoned building — how did we go from that to the polite, hypocritical society we are now, where we may talk about social justice, but the economic and racial divides have grown so wide that we can’t or won’t recognize the humanity of the people standing on the other side, a place where poor people are exotic animals to be studied and pitied and then forgotten, a place where we can no longer imagine lives different from our own?

It’s a question that’s almost never asked in our art, which prefers either to pander to and celebrate a single cultural subgroup or pretend that we really are all the same. The overabundance of “Jewish” or “African-American” or “Hispanic” or “immigrant” or “American” — meaning bone-white and suburban and wealthy enough to defensively believe they’re not wealthy at all — stories give away the lie of what our country has become: a place where we can only talk about ourselves in isolation from everyone else because nobody feels connected and nobody truly cares about what has become of those less fortunate than themselves. We’ve lost our sense of responsibility toward each other. We’re not listening. No matter how much we as individuals may care about the fortunes of others, we’ve all barricaded ourselves behind the walls of our own cultural fortresses of solitude.

That a musical — that broad melodramatic form that lends itself so easily to overwrought, oversimplified sentiment — explores these fault lines in all their complexity is remarkable. That it does so with urgency and integrity is laudable. That it manages to break your heart in the process, never preaching, always staying true to its characters and their particular individuality, is what makes it art of the highest order.

Joe Papp would be proud. “The Fortress of Solitude” embodies the theatrical ideals he held so dear, ideals this reviewer thought were gone forever.

Joshua Furst is a contributing editor of the Forward and the author of “The Sabotage Café.”

“The Fortress of Solitude” runs at The Public Theater through November 16.

Free To Be You and Me and Jonathan Lethem