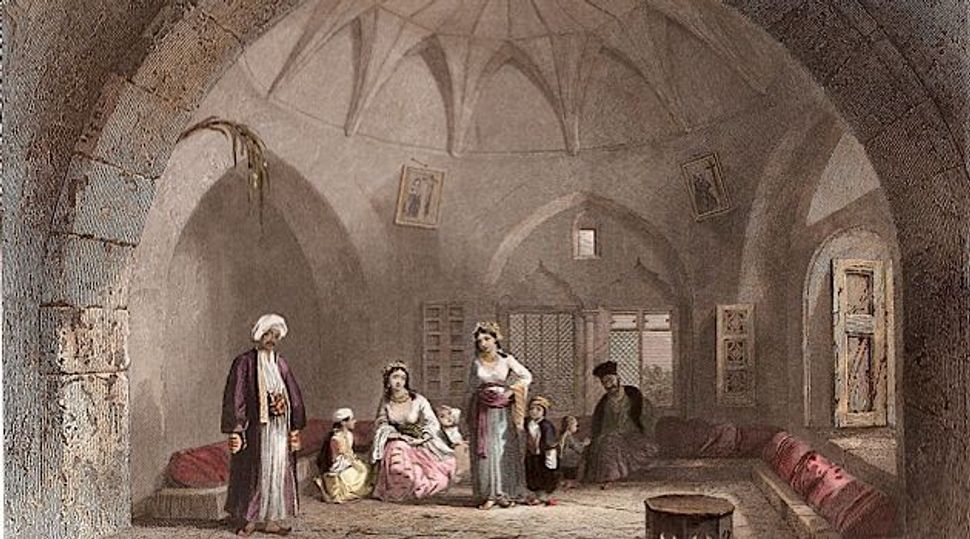 Before the Identity Crisis? The interior of the house of a Christian family in Jerusalem, ca. 1850. Image by Wikimedia Commons

Some of you may have been following the stories from Israel about a small group of Christian Arabs from the Galilee successfully petitioning the Israeli Ministry of Interior to register them as “Aramaeans” rather than Arabs. Led by a Greek Orthodox priest, Gabriel Nadaf, this same group has also been active in encouraging young Israeli Christian Arabs to volunteer for service in the Israeli army and has been vocal in its pro-Israel, anti-Arab sentiments. As a result, it has come under heavy fire from Israeli Arab politicians and some Israeli Christian church leaders, who have accused its members of being quislings.

You may ask how serious all this can be. After all, Aramaic (or Syriac, as it also is called), though once dominant throughout the Middle East before being pushed out by Arabic, has not been spoken in the Galilee, or anywhere else in Israel, for centuries. (Although no one knows exactly when its last speakers vanished, this was clearly long ago.) In another generation or two, indeed, it may no longer be spoken by anyone anywhere, because it is faced with the prospect of extinction. The number of its users, formerly many millions, has dwindled to a few hundred thousand, nearly all of whom are bilingual and many of whom are raising their children in Arabic. Moreover, these speakers divide into two main populations — a larger one, mostly in northern Iraq, speaking “eastern Aramaic,” and a much smaller one in southwestern Syria, speaking “western Aramaic” — both of which are living in war zones and have been badly affected by the fighting. Almost entirely Christian, they have been targeted by Islamic forces and many have fled or immigrated to places where Aramaic is not spoken.

In this respect, the Aramaic movement, whose goal is to replace the Arab identity of Israeli Christians with an identity uniquely their own, is not very serious at all. Despite attempts in a few Israeli Christian communities to teach Aramaic to children, the prospects of its revival as a spoken language are nil. Although some of its proponents have cited the case of modern Hebrew as a model and a possible inspiration, there can be no real comparison. Not only was Hebrew a language written and read by educated Jews everywhere when its spoken revival commenced in Palestine, but it also had traditionally served there as a lingua franca between Jews of different origins, and alone was able to unite them when Zionist immigration began entering the country in the late 19th century. The situation of Aramaic is more like that of Gaelic in Scotland, which cannot be revived because all Scots speak English and have no need for it — only this, too, is a poor comparison, because Scots Gaelic, while a dying language, still has tens of thousands of speakers, whereas Palestinian Aramaic, as we have said, has none.

And yet the Aramaic movement is not a total fantasy, either. Many Christian denominations in Israel, such as the Maronite and Eastern Orthodox churches, still use Aramaic as a language of prayer, just as Jews used Hebrew liturgically long after they had ceased to speak it. (The survival of ancient languages that are no longer spoken in prayer and sacred texts is common all over the world, such as Latin in Catholicism, Sanskrit in Hinduism, Pali in Buddhism, Ge’ez in Ethiopian Christianity and so on.) There is no reason that Israeli Christian Arabs should not learn to understand the language in which they pray and have a large religious literature, which is something that very few of them are able to do now. Just as many Jews in America study Hebrew, say, not in order to be spoken but in order to be comprehended as the language of the synagogue and Jewish tradition, so Aramaic could become a focus of study in Israel.

Nor does this mean that Israeli Christian speakers of Arabic who feel they are no longer part of the Arab world have no choice but to go on speaking Arabic. They do have another option — and that is Hebrew. Nearly all of them already speak Hebrew as a second language, many as well as most Israeli Jews, and anyone listening to their daily speech (as to the speech of Israeli Muslims) will hear frequent Hebrew words and phrases in it. Those of them wishing to embrace an Israeli identity while disassociating themselves from an Arab one need only begin raising their children in Hebrew — or rather, their children, as they become increasingly integrated in Israeli life, need only start speaking Hebrew to one another. This is a natural process that will eventually happen anyway; a conscious desire to make it happen will bring it about sooner.

In the long run, perhaps Israeli Muslims will switch to Hebrew, too, at which point the problem of creating a common Jewish-Arab Israeli identity will have come much closer to a solution. In the foreseeable future, however, Jewish-Muslim hostility, aggravated greatly by the Israeli-Palestinian conflict and the rise of jihadi Islam, will not permit this to happen. With Israeli-Arab Christians, there need be no such barrier. Aramaic is the language of their past, and knowledge of it should be encouraged, but Hebrew is the language of their future.