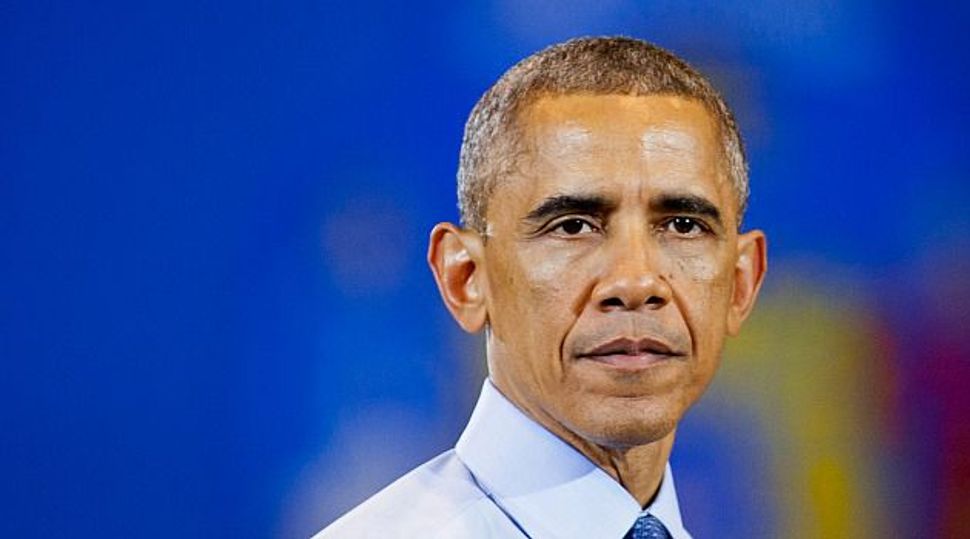 Silver Lining: J Street gave plenty to Barack Obama’s liberal allies in the midterm elections. Even though its candidates took a drubbing, the dovish PAC earned a major milestone. Image by getty images

J Street PAC, the dovish lobby’s political action committee, gave out more than $2 million to candidates in the 2014 midterm elections, claiming the mantle of the largest pro-Israel PAC. For J Street, this lead is viewed as an important milestone, marking the group’s growing acceptance as a legitimate representative of pro-Israel interests. “It shows that there is deep, meaningful support in the Jewish community for the views of J Street,” said Dan Kalik, J Street’s political director.

But critics of the pro-peace organization note that pro-Israel PAC money is a drop in the bucket of Jewish giving to political candidates, especially since the Supreme Court’s 2010 decision known as Citizens United came about, opening the flood gates for unlimited independent expenditures by corporations and individuals on behalf of candidates. Though they totaled more than $5 million in this election cycle, pro-Israel PAC donations are a fraction of the private and general PAC money given to candidates by Jewish donors.

“It’s not about the PACs,” said Morris Amitay, head of the Washington PAC, which is pro-Israel PAC. “It all takes place at the private events. That’s where they raise the real money.”

Seeking to maximize its impact, J Street gave its largest donations to Democrats battling in the key races that could have determined control of the U.S. Senate. The PAC provided Michelle Nunn, who was running in Georgia, with more than $200,000, and gave similar amounts to Jeanne Shaheen in New Hampshire, Mark Udall in Colorado and Bruce Braley in Iowa. Except in Shaheen’s case, the candidates’ respective Republican rivals defeated them.

The Republican Jewish Coalition, who funneled its own PAC money into some of these key races, argued that the results prove J Street’s PAC was ineffective.

The RJC made a point of contributing to races in which J Street was involved, and as results came in it pointed to at least two third of these races won the candidates RJC supported. “The RJC,” said the group’s executive director Matt Brooks, “will focus its efforts to ensure that candidates supported by J Street do not have electoral success.”

In the most watched key races, pro-Israel money came in from all sides. Udall, for example, was also endorsed by BiCPAC, a Long Island based pro-Israel group considered to be centrist, and by the Tucson, Arizona-based Desert Caucus PAC. Shaheen, one of J Street’s top recipients, also got support from NORPAC, one of the largest pro-Israel PACs, and is considered to have a more hawkish view on Israel.

It is somewhat unusual for NORPAC to endorse a candidate receiving funds from J Street. Though the PAC does not have a policy barring support for candidates who take J Street money, NORPAC president Ben Chouake told the Forward that this type of backing doesn’t happen very often. “We decide by the record of the candidate, not by who has endorsed him,” he said, “but it is unusual for us to support a candidate that J Street is supporting.”

Amitay, whose PAC is viewed as being right-of-center on issues relating to Israel, took a harsher stand on politicians backed by J Street PAC. “We will not contribute to a candidate who takes their endorsement,” he stated. According to Amitay, candidates taking money from both J Street and other Pro-Israel PACs “have no idea what J Street really is.”

Still, with 95 candidates willing to accept J Street’s contributions this election cycle, including some in high-stakes races that were at the heart of the midterm competition, the group feels it has lost much of the toxicity that characterized its early years of political giving.

“More and more, we are becoming a key for successful campaigns,” Kalik said. “Especially on the Democratic side, we’re seeing more and more candidates that want to learn more about us.”

Pro-Israel PACs give out their contributions based on their view of the candidates’ stance on Israel. Most PACs look to the voting record of incumbents, which is carefully monitored by groups like the American Israel Public Affairs Committee (which is not a PAC and does not endorse candidates). A key criterion is the candidate’s support for continuing robust American foreign aid to Israel, which is one of America’s largest single foreign aid recipients. PACs also look at a candidate’s support for smaller programs, such as the Iron Dome rocket defense system, which Israel developed with financial backing from the United States.

Most pro-Israel PACs do not directly address the question of candidate support for a two-state solution to the Israel-Palestinian conflict, or Israel’s policies toward the Palestinians. In recent years no legislation has come before Congress that would call on lawmakers to take a stand on these issues. But J Street does seek candidates who express support for a two-state solution and who backed Secretary of State John Kerry’s latest peace initiative, which has led the PAC to endorse mainly Democrats.

But the major dividing factor when it comes to pro-Israel PAC money is Iran. J Street has sought actively to back candidates who express support for a diplomatic solution to the international community’s nuclear standoff with that country. But other pro-Israel PACs endorse candidates who back increased sanctions on Iran and who wish to make sure existing sanctions are not lifted quickly in case of an agreement. “We want to see sanction bills against Iran and against terror groups it sponsored such as Hezbollah, moved forward,” Chouake said. “We don’t go into the question of how Israel wants to do its negotiations with the Palestinians.”

The impact of the pro-Israel PAC money spent this cycle could be put to a test in upcoming months, perhaps even in the lame duck session, if the administration reaches a nuclear deal with Iran. Then it will be up to Congress to decide if it steps in to block the agreement or to limit its scope. Pro-Israel PACs are expecting the candidates they endorsed to live up to the policies that got them the PAC money: for the centrist and right-wing pro-Israel groups, this means requiring congressional approval of the nuclear deal and insisting on maintaining sanctions in case the deal is not satisfactory.

J Street PAC, on the other hand, would like to see its endorsees back President Obama on the issue and to refrain from mounting obstacles to a diplomatic solution.