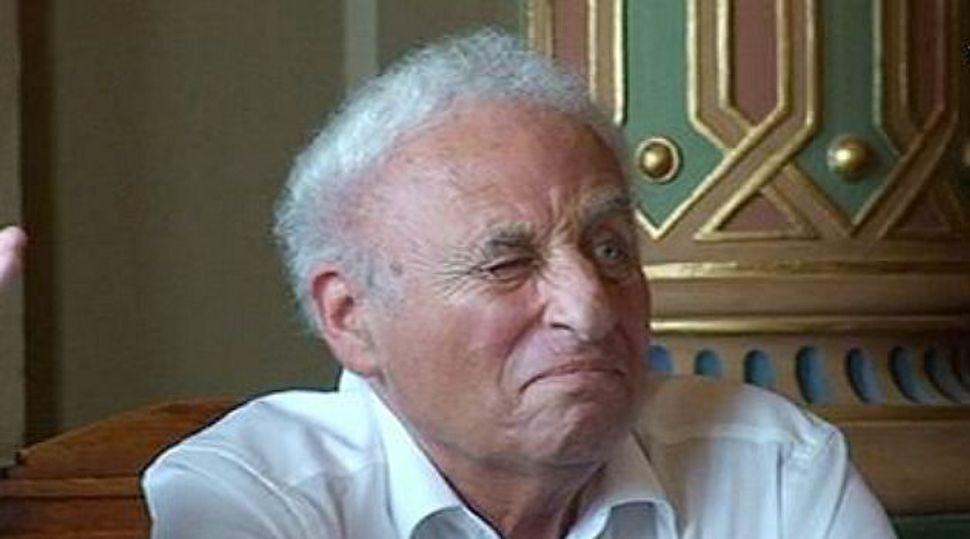 Judas of Budapest? Hungarian Jewish leaders were stunned when the ex-leader of the community abruptly joined the right-wing government as a consultant.

(JTA) — In the 22 years he ran Hungary’s Mazsihisz Jewish umbrella organization, Gusztav Zoltai was called out for many things.

Zoltai, a former secret police agent who led the Jewish federation until his retirement earlier this year, was accused of corruption and labeled a relic of dark times. Others took issue with his flirtatious behavior toward women.

Yet for all his perceived flaws, no one had called Zoltai a traitor or questioned his loyalty to Hungarian Jewry – until September, when in the wake of a fierce war of words over what many Jews saw as the Hungarian ruling party’s pandering to far-right voters, Zoltai abruptly switched sides.

Just hours before the first meeting between community leaders and the government since relations came to a halt in February over a disputed Holocaust monument, Zoltai accepted a position as a government consultant. In the Sept. 12 meeting, Zoltai sat with Hungarian officials opposite his former Jewish colleagues.

“Betrayal. That’s the only way to call what Zoltai has done,” said Judit Csaki, a journalist who led a series of recent protests against the planned staging of a pro-fascist production at a municipal theater. “Zoltai gave his name and his face to a classic divide-and-conquer tactic designed to break up the Jewish community for its criticism of the government.”

Andras Heisler, the newly elected president of Mazsihisz, said Zoltai had “destroyed his life’s work – that wasn’t immaculate to begin with.” The board of the famed Dohany Street Synagogue, where Zoltai once served as president, voted to expel him.

For Zoltai, a Holocaust survivor who has represented the Jewish community in restitution talks with the government, being branded a traitor was painful. Raised in a Budapest suburb, Zoltai lost 27 members of his family in the Holocaust. His father died en route to a concentration camp. The fate of his mother remained unknown until 1995, when Zoltai brought back her remains from Germany, where she had died in a camp one day after its liberation.

“People who say I am a traitor are not right in the head,” Zoltai told JTA in a brief interview at his new synagogue at Bethlen Square. “I took this position to help the community, not the government. And my credentials speak for themselves. I’m no right-wing nationalist.”

Raised in an orphanage, Zoltai went to work in a textile plant at the age of 18. In the harsh postwar years, he was married twice but both wives died young.

Zoltai went on to serve as an airport border guard in the feared AVO secret police. Later he joined the Worker’s Guard, a communist militia set up to suppress resistance following the failed 1956 rebellion against the Soviet-backed government.

“Zoltai had absolutely nothing,” said Peter Feldmajer, a former Mazsihisz president who worked with Zoltai for 20 years. “The party was his way to get ahead in life.”

But instead of pursuing a government career, Zoltai became the director of a small theater in the 1980s before assuming the directorship of Mazsihisz. Some allege Zoltai was forced out as part of Heisler’s attempt to reform a notoriously opaque organization that owns assets worth millions of dollars.

“The man knows everything, every little dirty secret about every community leader, past and present,” said Rabbi Zoltan Radnoti, who heads a popular synagogue in Budapest. “That he could share this knowledge with his new employers is very frightening to them. I know the government likes this, and I think Zoltai enjoys seeing them shake with fear.”

The Holocaust monument dispute followed a series of moves by the ruling rightist Fidesz party that critics allege were designed to compete for the nationalist vote against the rising far-right Jobbik party. Among the government’s decisions were plans to name a Budapest street after an anti-Semitic author and to stage a play by another at a municipal theater.

But the monument fight turned out to be a turning point. Like other community bosses, Zoltai had previously lambasted the government over the monument, which depicts an angel being attacked by an eagle. Critics charged the statue was a symbolic statement of Hungary’s innocence in the wartime murder of 500,000 Jews, a claim the government denied. Efforts to have the design altered foundered in February, after which Mazsihisz suspended contact with the government.

Citing a confidentiality clause in his contract, Zoltai would not say what his new government position requires of him, nor how much money he is earning.

Like many Hungarian Jews, Radnoti is furious with Zoltai, but the rabbi also describes him as a kind man. When Radnoti’s father lost an eye in a car accident that rendered him jobless and penniless, it was Zoltai who put him up in a community-owned home within a day of being asked to help.

Working for the government, Radnoti says, is above all Zoltai’s way of reinserting himself into the center of the action.

“This is a man who ran the show for decades but has been excluded just like that against his will,” Radnoti said. “He took the government job because can’t let go now. It would kill him. He needs to be in the center. He needs to have power.”

To Feldmajer, that Zoltai should be ostracized for accepting a government position is a paradox that is indicative of the problems facing Jews in a society that has failed to fully come to terms with its Holocaust-era culpability.

“What’s really sad about this whole case is that in any other country, the Jewish community would be honored to have a former leader become a consultant,” Feldmajer said. “But this is Hungary.”