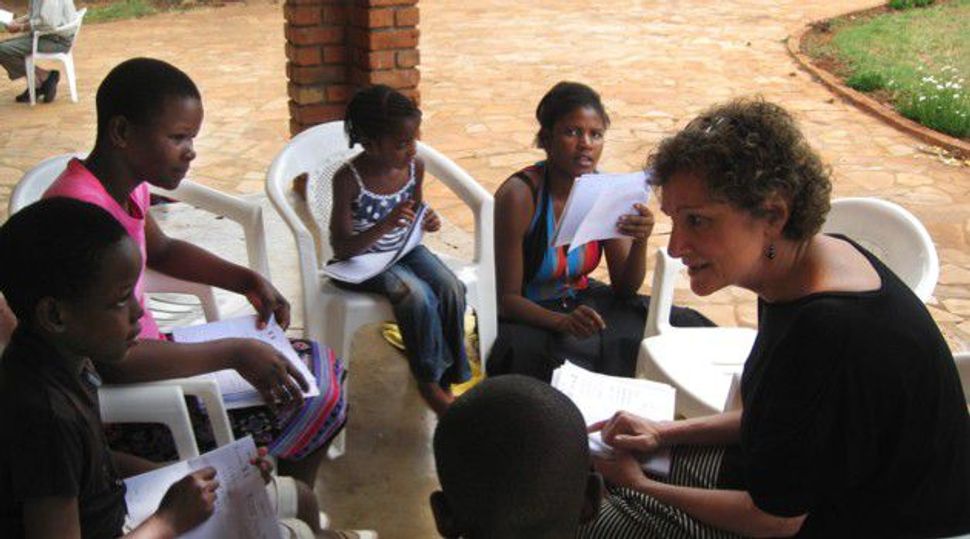 A Teaching Moment: Elaine Berg meets with Lemba children in Harare, Zimbabwe. Image by COURTESY OF IRWIN AND ELAINE BERG

(Haaretz) — The number of people who believe they are descendants of the Jews or the ancient Israelites about equals the number of known Jews, those who are counted in official international censuses, an expert on Judaizing movements says.

Speaking at a Jerusalem conference, the British historian Tudor Parfitt suggested that what he called a shadow community of Jews numbers between 13.5 million and 14 million.

In many cases, he said, this voluntary affiliation with the Jewish people is a relatively new phenomenon. Members of these newly identified Jewish communities could be found in places as diverse as northeastern India, Papua New Guinea, Nicaragua, the jungles of South America and southern and central Africa, he said. Many also can be found in black communities in the U.S.

Among these millions are communities in Asia and Africa that see themselves as descendants of the so-called lost tribes – 10 of the original 12 Hebrew tribes said to have been deported from the Kingdom of Israel after it was conquered by the Neo-Assyrian empire in about 700 BC. Among these, in turn, are the Bnei Menashe of northeastern India, hundreds of whom have immigrated to Israel in recent years, where they have undergone official conversion to Judaism and now live as Orthodox Jews.

The new identifiers also include millions of people, mainly in Latin America (primarily Brazil, Peru, Colombia and Nicaragua), who see themselves as descendants of Jews forced to convert – also known as Conversos or Bnai Anusim – during the Spanish Inquisition more than 500 years ago.

Several experts addressing the conference noted that the rise of evangelical Christianity in Latin America in recent years, at the expense of Catholicism, has made it easier for these people to identify as Jews and practice Judaism because Judaism dovetails with their own messianic ideology and their ideas of redemption.

“Certainly globalization plays a very important role in this phenomenon,” explained Parfitt, “but I think one of the interesting, paradoxical things is the effect of the Holocaust and the way that people want to identify as Jews. You’d think that it would be the opposite, but in the case of both the Igbo and the Tutsi tribes in Africa, for example, they both had their own genocides, and they increasingly perceive themselves as Jews as a result of that.”

Parfitt, an emeritus professor of modern Jewish studies at the University of London’s School of Oriental and African Studies, is currently a distinguished professor at Florida International University, where he is director of its Center of Global Jewish Communities. An expert on the Jewish communities of Asia and Africa, he was one of the keynote speakers at a two-day conference on worldwide Judaizing movements held at the Van Leer Institute.

Shalva Weil of the Hebrew University of Jerusalem, an expert on the lost Israelite tribes, said the growing worldwide phenomenon of “wannabe Jews,” as she termed it, was motivated partly by a desire for economic improvement since many of those claiming this status were members of impoverished and marginalized communities. She implied that as Jews they would be allowed to emigrate to Israel.

Still, she said that it was not the primary motivation and that globalization was a more important factor. In particular, she noted the tendency of young Israelis to explore remote corners of their world, including places where locals may not otherwise have had much interaction with Jews.

“Israel sends thousands of backpackers each year on post-army trips, where they come into contact with exotic and wonderful people and begin to see similarities with their own religion,” Weil noted.

Another factor explaining the growth of “wannabe Jews,” she said, was the worldwide rise of fundamentalism, and – together with it – the quest for messianism. “Eschatological visions have always been associated with the 10 lost tribes,” she said.

While some of these communities, like the Bnai Menashe of Israel, have undergone official conversion processes so they could emigrate to Israel, not all of them have been driven to move to Israel as part of the realization of their Jewish identity.

“In Africa, among groups I work with, there doesn’t seem to be a large number that want to come to Israel,” noted Parfitt. “They love Israel, they support Israel, they want to study, but they’re not dying to come.”

On the other hand, he said, a community of tens of thousands of newly identified Jews in Papua New Guinea had expressed hopes of making such a move. “They happen to be outstanding rugby players, and if you’ve got any sense at all, you should bring them in,” said Parfitt.