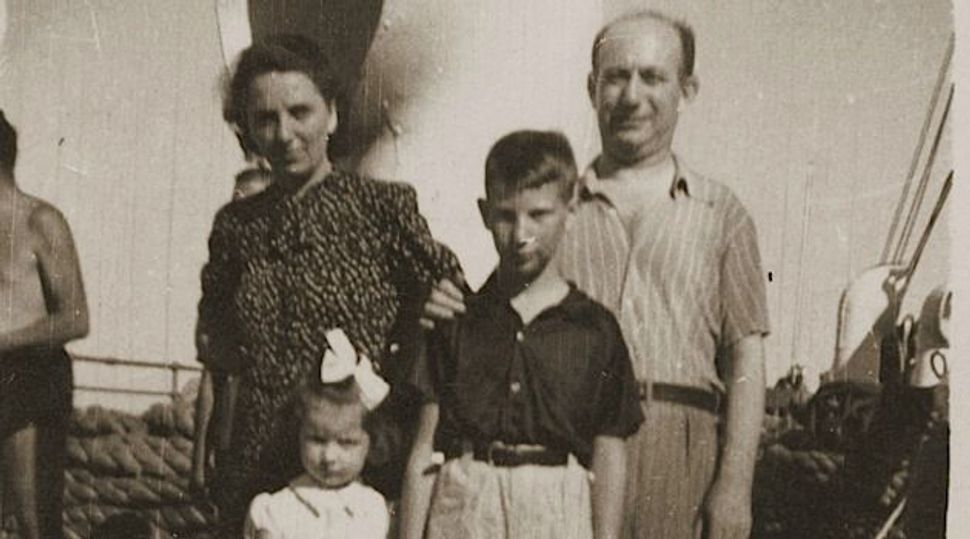 Chinabound: In the summer of 1939, the Wacs family was en route to Shanghai on board the Conte Biancamano. Image by U.S. Holocaust Memorial Museum, Courtesy of Ilie Wacs

The Wachses were just another middle class Jewish family living in Vienna.

Moritz Wachs and his wife Henia Fach had two children, Ilie, who was born in 1927, and his sister Deborah, who followed in 1935. Moritz was a tailor who owned his own small tailor and clothing shop. His head tailor was a quiet German man in his 20’s named Alois. Considered a friend of the family, he often played soccer with Ilie.

After Nazi Germany annexed Austria in March 1938, the business was “aryanized” and Alois, a member of the Nazi Party, became its owner. One day in early November of 1938, Alois warned the family that “something terrible” was going to happen, and told them to remain quiet inside their apartment at Lilienbrunngasse No. 7. “Keep everyone inside. You will not be touched,” said Alois. On November 9, in wide-spread pogroms that became known as “Kristallnacht” (“night of the crystal”), Jewish businesses and synagogues were vandalized and destroyed, almost 100 Jews were murdered, and thousands sent to concentration camps. Ilie and his sister recall vividly the terror, and then the relief, as Nazi boots marched past their door. The Wachs family remained safe, thanks to Alois.

Alois protected the family in other ways. He secured several extensions for them to stay in Vienna, as Moritz, who was Romanian and had deserted the army, was stateless, and Henia was from Poland. Finally, Alois urged the family to leave Austria by August 31 of 1939, clearly knowing of the September 1 invasion of Poland, which marked the beginning of the Second World War, when wartime conditions would make it more difficult to escape.

As instructed by Alois, the family made its way through Italy to Shanghai, a city that didn’t require visas or passports to enter at that time. The Wachs’s stayed in Shanghai for twelve years, living in the Jewish “Shanghai ghetto” in Hongkew with 18,000 refugees, who came primarily from Germany and Austria. It was there that they changed their name to Wacs. Ilie eventually went on to study art in Paris and became a fashion designer in New York. Deborah and the parents emigrated to Canada and New York. Deborah, who married and took her husband’s name, Strobin, settled in San Francisco and devoted her time to philanthropy. All family members who remained in Vienna were killed.

The siblings rarely spoke of their escape, their life in Shanghai or Alois, of whom they never heard again. They also do not know what happened to the tailor shop.

That is until 1997, on Wacs’s 70th birthday, when he prodded his sister to take a trip with him to the United States Holocaust Memorial Museum in Washington, DC. “I was reluctant to go,” she said. “I didn’t want to be reminded of anything. I never even wanted to talk about it.”

In an exhibition on Jewish refugees in China, Strobin saw a photo of herself, aged 5, with two other Jewish children. “For me, it was pure horror. I was so shocked to see a picture of myself that I had never seen before,” she said. She concluded the Japanese, who at the time had governed and occupied Shanghai as a foreign concession, used the photos as propaganda.

The experience triggered a desire to write a book about their lives. “An Uncommon Journey” was published by Barricade Books in 2011. Wacs was unwilling to search for Alois as he feared to find out that the man who illustrated such great humanity to his own family may have acted in polar opposite to so many others. Said Strobin: “Ilie never wanted to see Alois as anything but good.”

Jane Rohman, whose public relations firm has guided the book since its publication, said that without fail, if Strobin or Wacs lectured, visited a school or appeared at a museum, inevitably someone would ask, “What happened to Alois?” Curiosity from audience members and readers fueled an interest in finding the German who helped the Jewish family.

Late last year Wacs exhibited a collection of his paintings at the Museum of Tolerance in New York. At the end of the exhibit Rohman went out on a limb and commissioned a large poster that read, “Help us find Alois.”

When Rohman and others were hanging the installation at the Museum of Tolerance in preparation of its opening, David Schroeder, a professor of criminal justice and forensic sciences at the University of New Haven in Connecticut, along with several of his students, passed through the museum. After he met Wacs and learned about Alois, Schroeder and a colleague decided to create a one-credit course for the following semester, aptly titled, “Finding Alois.”

With scant information, the students threw themselves into social networking, creating a Facebook page, Finding Alois, and pursuing leads coming in from as far away as Australia.

But as the semester came to an end in May, the effort had not yielded Alois’s whereabouts. Nonetheless, all the students in the Finding Alois class (a course which is no longer being offered), committed to continue the search. As for Schroeder, he is looking for concrete evidence. Right now, he is seeking access to the Austrian government’s tax records. Only there, he said, can Mortiz Wachs’s employee(s) for 1937 or 1938 be found. “Once we get that name, I think the barrel will just roll.”

Earlier this year, a Jewish-American man sent the siblings a photograph of an aging, lanky man in his 90’s, sitting in a wheel chair. The sender said he had read the story of the search for Alois on the “Finding Alois” Facebook page and recognized in the description a soft spoken, German man, who worked for him as a salesman for twenty-five years beginning in the 1960s. He was known as Al. While the two mostly had a phone relationship, the Jewish man remembers hearing that Al had been a Nazi. The businessman never asked Al about it because he had never displayed any anti-Semitism, despite knowing that his boss was Jewish.

Because of the sensitive nature of the search, neither Strobin nor Schroeder can give specifics about this lead, which is one of several they have pursued.

Wacs, upon seeing the photograph, said that there was something familiar about the man but he could not tell for sure if it was Alois. Wacs died of lung cancer on September 7.

His family and friends say that Wacs always came back to Alois, giving considerable thought to the context of what was happening in Germany in 1938 when a Nazi German came forward to help a Jew.

Rohman remembers Wacs asking: What is it in one person that makes them do that? “Even if we never find Alois,” she says, “what is it in one human being versus another who sees injustice being done and does something about it?” And morally, what does it mean if he then went on to do some awful things as well?