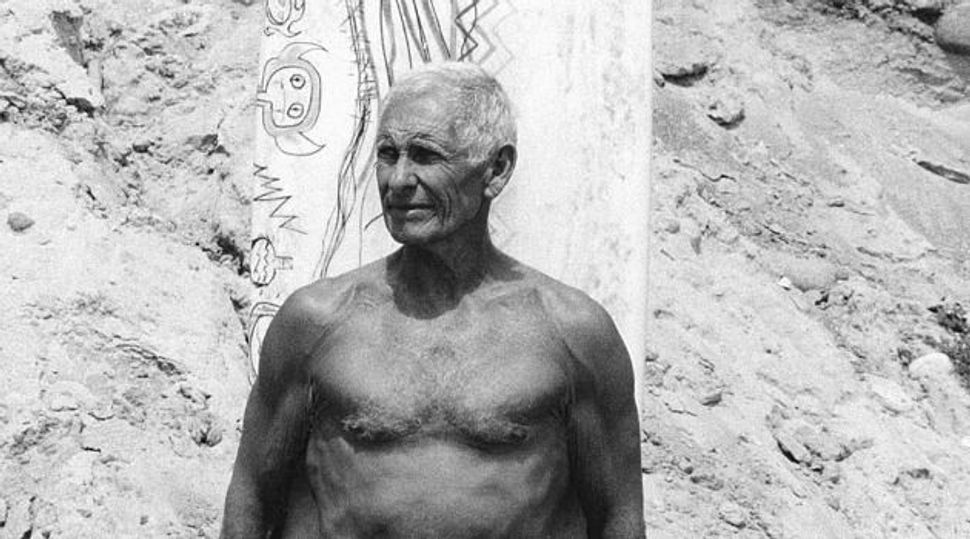 What do you get when you mix West Coast catch-a-wave surfing culture with the profoundly Jewish sensibilities of the son of Yiddish-speaking immigrants?

Some answers can be found in the life story of surfer Dorian “Doc” Paskowitz, who died on November 10 at age 93 and introduced a measure of Yiddishkeit to a sport not necessarily known for its Jewish links. Born to a family with Russian and Polish Jewish roots in Galveston, Texas, where he began to surf as a preteen, Paskowitz moved to San Diego’s Mission Beach district. He inherited a theatrical gene shared by his sister Sonia Darrin (born Paskowitz), actress and mother of the former child actor Mason Reese. Darrin played a haughty bookseller who faces down Humphrey Bogart in “The Big Sleep” (1946) and also graced “Frankenstein Meets the Wolf Man” (1943), as well as the film noir “Bury Me Dead” (1947).

Channelling his extroversion into surfing competitions, Paskowitz earned undergraduate (1942) and graduate medical degrees (1946) from Stanford University before deciding that he was the “dumbest Jewish doctor on the planet and the dumbest person to have ever graduated from Stanford.” In his guidebook “Surfing and Health,” he nonetheless offered much advice, including a raw foods, low-fat diet with maxims such as “Don’t do anything a gorilla wouldn’t do.”

A gorilla certainly would not serve as president of the Hawaiian Mental Hygiene Association, as Paskowitz did in the mid-1950s, before he decided to drop that career path entirely. In 1956, in belated reaction to the Holocaust as well as to professional pressures, Paskowitz had what he later described as a “nervous breakdown,” left his second wife and their children, and traveled to Israel to seek his roots, bringing six surfboards decorated with the Star of David. At Frishman Beach in Tel Aviv, he met a lifeguard, Shamai “Topsi” Kanzapolski, who agreed to assume responsibility for popularizing surfing in Israel. Until that time, Israeli lifeguards had used Hasake board boats of ancient origin for makeshift surfing, lacking the refinements of the modern board. Paskowitz hoped to bring Arabs and Jews closer together through the sport, but the outbreak of the Suez Crisis interrupted his plans.

A half-century later, Paskowitz would co-found Surfing For Peace, an initiative to send surfboards to sports enthusiasts in Gaza. He was inspired by a Los Angeles Times article which noted that among other necessities, Gaza dwellers also lacked surfboards, which prevented them from practicing a sport that could help calm tensions. Readers of 2013’s “Welcome to Paradise, Now Go to Hell: A True Story of Violence, Corruption, and the Soul of Surfing” about how surfers in Oahu, Hawaii created a culture of drugs and crime, know that the sport does not always bring peaceful results. Paskowitz was fully aware of human failings of surfers, as he recalled to the surfing website “The Inertia” in 2013: “There was a lot of anti-Semitism in Malibu in the ’50s. But… I would surf with the Devil, if I had to. Buzzy Trent [the pioneer of big wave surfing] hated Jews. My best friend Wally hated Jews. Unfortunately he found out his grandfather was Jewish. The whole Malibu bunch disliked Jews… I took from Judaism those things that I thought would help me do two things: have an uninterrupted, innocent view of God, and keep me from separating myself from the community of my brethren.”

Paskowitz’s connection to his faith and his idealistically upbeat, quixotic efforts filled a long life of many unusual choices. Returning from Israel to America in the 1950s, he married again and fathered nine children, living in poverty with his new family in repeatedly repossessed, used small campers. He named them David, Jonathan, Abraham, Israel, Moses, Adam, Salvador Daniel, Navah and Joshua. Israel, known as Izzy, noted in his affectionate, bemused 2012 memoir “Scratching the Horizon: A Surfing Life” that his father took seriously the biblical command to be fruitful and multiply, to “do his part to repopulate the Jewish state of Israel.”

In a comparably individualistic way, after returning from the Middle East he put on tefillin every morning, but not for standard prayers, which he dismissed as “witchcraft.” Instead, he voiced a personal remembrance for devout relatives murdered in the Holocaust for their religious identity. Paskowitz refused to send his children to school, subjecting them instead to a surfing boot camp atmosphere with eccentric side-effects that they recounted with some unease in the 2007 documentary film “Surfwise”. Paskowitz told Surfer Magazine in 2010: “There is a Jewish saying that applies to the holiest day in the Jewish calendar, and it goes like this: ‘As Israel has kept the Sabbath so the Sabbath has kept Israel.’ And our family motto was ‘As the Paskowitzes have kept surfing, so surfing has kept the Paskowitzes.’”

And so it did, along with the popular Paskowitz Surfing Camp which has survived in various guises over the years, in locations from Tel Aviv to California. The family love also survived. Paskowitz’s daughter Navah tweeted to announce his death: “My angel, My daddy, Died tonight, He is with Ha Shem.” The website of his son Joshua, a painter, states: “In honor of Doc… Live Life to the Fullest! Surf more! And stay away from refined sugar!” Paskowitz, who lived in Hawaii for many years, ended phone calls by saying “Shalom-Aloha,” which seems an appropriate send-off for him now.