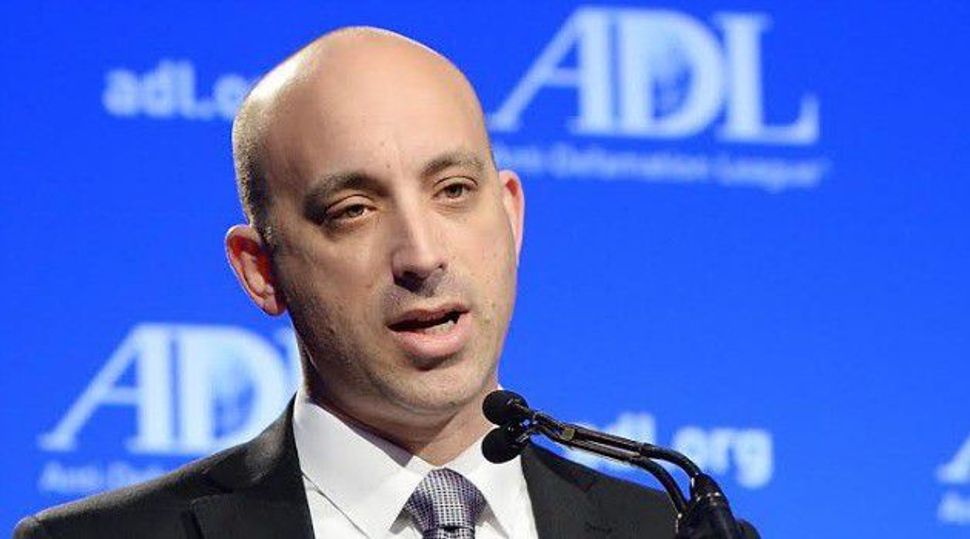 In its choice of a new leader, the century-old Anti-Defamation League has clearly signaled its determination to pursue a course of generational change that reflects the transformation of American Jewry itself.

In this respect, Greenblatt, 43, embodies the ADL’s wish to open a new era in which young American Jews, currently turned off by the idea of joining membership organizations, will flock back home.

Three decades separate the outgoing and incoming national directors. Foxman, a Holocaust survivor whose life was shaped by the tragedy, has devoted his career to Jewish organizational life in America. Greenblatt, who will not formally take office until July 2015, is the grandson of a Holocaust survivor and has taken an ongoing interest in Jewish life. But his career path has focused on broader social issues.

Moreover, while Foxman was known as an occasional critic of the Obama administration’s policy on Israel, Greenblatt comes directly from the Obama White House — albeit not from a part that deals with Israel or foreign policy. The ADL-chief-to-be, who serves currently as a special assistant to the president, heads the White House Office of Social Innovation and Civic Participation, which works strictly on domestic policy. His previous political and charity work have placed him squarely in the liberal column.

“We need young blood, new blood and I think that he’s perfectly qualified,” said Sharyn Nichols, an ADL member from Los Angeles. “The biggest challenge for the ADL is that we need to get more young people involved, we need to get people in their 20s and 30s.”

The ADL is the first major Jewish organization to undergo a generational leadership shift, and it has done so in a dramatic way. The group’s choice breaks both with the notion that Jewish leaders should come from the inside, and with the natural organizational instinct to maintain patterns that have proven successful thus far.

When the ADL’s succession committee began its search for a new national director, recalled Barry Curtiss-Lusher, the group’s national chair who also headed the committee, one member said: “We are looking for another Abe.” At that point Foxman, who was also a member of the committee, intervened. He reminded members that he had not come out of the same mold as his predecessor, Nathan Perlmutter. His successor, Foxman told the committee, should not be required to be the “next Abe.”

But with his outsized public profile, Foxman was more than an organizational leader. His common touch, inclusive bonhomie, and boundless charisma appealed both to donors and to politicians, in America and abroad. Foxman, referred to by many as the “Jewish pope,” was a brand of his own, just as important, if not more so than the organization he headed.

“The biggest challenge for Jonathan is going to be becoming the voice after we’ve had such a strong voice for so many years,” said Esta Epstein from Boston, who was a member of the ADL selection committee that chose Greenblatt. In a tribute lunch to Foxman on November 7, film producer Lawrence Bender put the challenge Greenblatt will face in more colloquial, somewhat starker terms. “To Jonathan Greenblatt I say: ‘You have big shoes to fill coming from the White House Shmite House.’”

“Does he have the gravitas that Foxman had?” one Jewish Washington insider asked rhetorically, and quickly answered: “No, but who does?”

Curtiss-Lusher disagreed. Being a potential national and global leader was one of the prerequisites of the job, he said. “We think that given time, he will be just that kind of leader,” the selection committee chairman said.

The search process leading up to Greenblatt’s selection took two years and was conducted by ADL and an outside consulting firm. Together, the two groups reviewed hundreds of candidates. Some were obvious, while others, like Greenblatt, represented the group’s wish to think outside the box.

“In hiring someone clearly from the next generation to succeed an icon such as Abe Foxman, the ADL shows that it recognizes that what has gotten them here will not get them further,” said William Daroff, vice president for public policy of the Jewish Federations of North America.

Still, ADL leaders insist that their choice does not represent any change in the group’s core values or mission.

“We’re already in a process of modernization,” Curtiss-Lusher told the Forward. “But I don’t see any change in terms of direction and mission.”

Despite the clear generational change, outsiders could still point to key continuities. While Foxman was a child survivor of the Holocaust, Greenblatt heard of it from his grandparents’ stories.

And though Greenblatt does not come from the Jewish organizational world, he has a prior history with the ADL. He began working as an intern at the organization during his studies at Tufts University. To an audience of ADL activists gathered in Los Angeles on Thursday, Greenblatt told the story of his first steps with the organization after returning from study in Europe, where he saw the remnants of the Jewish communities in Germany and in Hungary, from which his forefathers had had to flee. “I came back to the U.S., determined to make a difference — to fight anti-Semitism and to serve my people, the Jewish people,” he said.

But Greenblatt’s professional life took him in other directions. He managed real estate and later co-founded a business venture, Ethos Water, which tied its branding to a socially conscious cause by donating a small part of the profits to clean water programs. Since its 2001 founding, the company has granted more than $7.3 million to help support water, sanitation and hygiene education programs in water-stressed countries, according to the company’s website. Still, many environmental activists have condemned bottled water itself as a threat to the environment due the fossil fuels required for their production and the empty bottles that end up in landfills.

The company was later sold to Starbucks, and Greenblatt became a vice president of the giant coffee shop conglomerate. He later served as head of GOOD Worldwide media company, a platform for socially-minded publications and founded the not-for-profit All for Good, an Internet platform that matches volunteers and activists with organizations attuned to their interests (and vice versa). Greenblatt also taught social entrepreneurship at UCLA.

While he has not worked directly in the organized Jewish world since his ADL student internship, Greenblatt maintained ties with major groups as a donor and supporter. In his recent White House position, he spearheaded a joint effort with the JFNA to provide assistance to Holocaust survivors living in America. The effort later led to Vice President Joe Biden’s decision to appoint a special envoy for this issue and to devote federal funds and AmeriCorps volunteers to helping survivors.

A former member of Sinai Temple in Los Angeles, Greenblatt was involved in communal activity, though not necessarily by taking on leadership roles. “Behind the scenes, Jonathan championed many Federation and Jewish community issues,” said the Los Angeles Jewish Federation president and CEO Jay Sanderson.

“For the position, temperament is important and Jonathan is very calm and deliberative — he won’t fly off the handle, which is very important in dealing with such a volatile issue like anti-Semitism,” said Rabbi David Wolpe of Sinai Temple.

Greenblatt is married to Marjan Keypour Greenblatt, an Iranian Jew who was forced to leave the country after the 1979 Islamic revolution. His wife’s experience, Greenblatt said in his speech on November 6, served for him as a reminder that anti-Semitism remains a global problem.

“Fighting this scourge and advocating for the rights of all is not just an intellectual pursuit — it’s personal for me, a deeply held value, one that has been seared into my soul,” he said.

As well as having worked for seven years around the turn of the millennium as an associate director of a regional branch of the ADL, Keypour Greenblatt is a member of the Jewish Federation’s young leadership cabinet. She is co-founder, and currently director, of the Alliance for Rights of All Minorities, an organization devoted to promoting human rights in Iran.

“The ADL made a brilliant decision, they get a ‘twofer,’” said Sam Yebri, an Iranian-Jewish activist from Los Angeles. “Jonathan’s political access and credibility and Marjan’s vast experience related to Iran, will also help the ADL tap into the Persian community.”