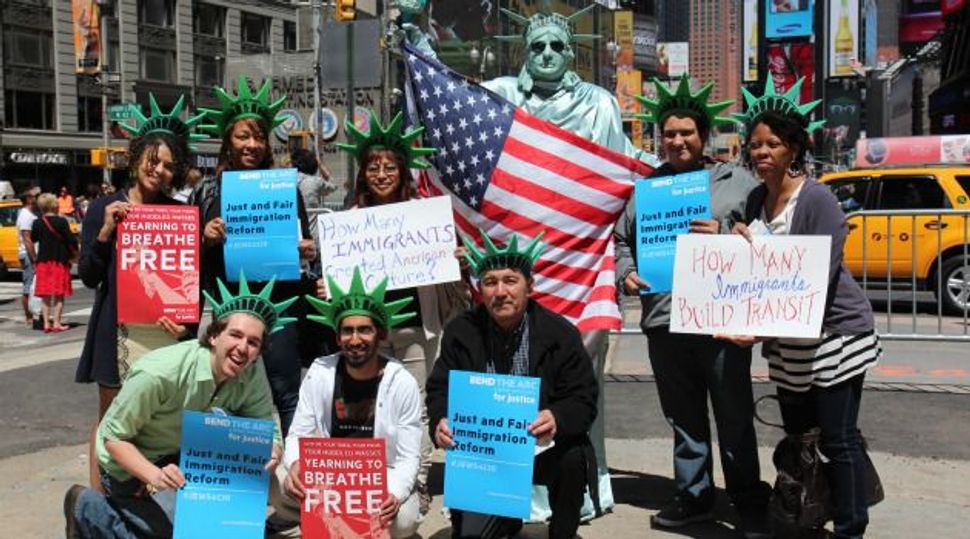 Image by bend the arc

After sounding a collective oy vey over the Republican landslide, Jewish communal activists began looking for ways to make lemonade out of what they perceive as lemons delivered by voters in the midterm elections.

Hopes of liberal-leaning activists to see comprehensive immigration reform, voting rights legislation or increased funding for safety network programs have been dashed by the election in which the GOP grabbed control of the Senate and strengthened its hold on the House.

The activists quickly replaced their big goals with a more modest set of expectations.

“Our job doesn’t change. We start where we are and we do what we can,” said Rabbi Steve Gutow, president and CEO of the Jewish Council for Public Affairs, an umbrella organization representing Jewish communal policy issues. “There is no such thing as being totally successful or totally unsuccessful.”

Jewish activists, who almost exclusively rely on Democrats as allies across a broad range of issues, spoke in grim terms on the sidelines of the General Assembly of the Jewish Federations of North America, the organization’s annual gathering that took place this year at National Harbor, Maryland, just outside Washington D.C.

The GOP sweep was hardly mentioned on stage or at the dozens of breakout sessions. But in private discussions activists stressed that much of the work done by Jewish federations depends on government funding for programs designated to help poor, elderly and at-risk members of the community.

Looking to chart a course for liberal Jews, the Religious Action Center of Reform Judaism convened a video conference on November 6 with its top leaders. Much of the news was gloomy.

Rabbi David Saperstein, the outgoing director of the RAC, noted that the Senate energy and environment committees will both be headed now by Republicans who had expressed skepticism on climate change, a fact that does not bode well for communal efforts to promote energy legislation.

“It’s going to be tough on the issues we all care about,” added Nancy Zirkin, director of policy for the Leadership Council on Civil and Human Rights, an umbrella organization of human rights organizations.

But participants also highlighted areas where progress can be made even with a GOP-led Senate.

One such issue could be raising the minimum wage. It’s been a tough sell in Congress before, but has gained support in several red-state ballot initiatives, indicating Republicans may be warming up to the idea.

According to Zirkin, progress can also be made on transportation and infrastructure investments, an issue that united conservatives who see it as business-friendly spending and liberals who view easier movement as a populist issue.

Another issue that could align interests of the Republican Congress, Democratic administration and Jewish activists is sentencing reform, which calls for a revision of criminal punishment policies that are viewed as unfair and excessive.

Other issues, all agreed, are doomed.

“It is hard to see how the LGBT rights issue will not hit a political plateau,” predicted Saperstein, referring to legislation relating to workplace and marriage rights of gays, lesbians and transgender individuals.

When it comes to immigration reform, the top priority issue for many Jewish groups, already dim prospects for legislation are now all but gone.

Jewish activists plan to join forces with a broader immigration coalition in attempts to win partial victories over the next two years, with a goal of ensuring undocumented immigrants are not deported while the nation grapples with their future.

President Obama has indicated his willingness to take administrative steps bypassing Congress on this issue, a move which is expected to win wide support among liberal Jewish activists.

Jewish advocates for women’s rights are still hoping for a Congressional fix to the Hobby Lobby Supreme Court ruling which allowed employers to refuse to provide contraceptives as part of their health care plan. In the battle to convince lawmakers to keep in mind women’s rights, Nancy Kaufman, CEO of the National Council of Jewish Women, saidadvocates have reached out to Republican lawmakers using the common interest in supporting Israel. Once they are in communication, NCJW can begin a discussion on women’s issues.

Kaufman, who noted that it would be difficult to promote women’s rights issues in the next Congress, found, however, a silver lining in the broad-based GOP sweep.

“Republican candidates that got elected are a little more pragmatic,” she said, comparing them to the Tea Party–influenced 2012 candidates.

Concerns about what the future has in store for social services dear to the hearts of Jewish activists extend to the local government level as well.

In Pennsylvania, for example, federation officials have been watching with growing unease the Republicans’ success in the state legislature.

“I’m not optimistic that much is going to get done in Pennsylvania in the next few years,” said Brian Gralnick, director of the center for social responsibility at the Jewish Federation of Greater Philadelphia. “Dollars will be even more difficult to come by,” he added.

For members of the Jewish community dependent on federation support, this means less funding for safety network programs, including food assistance for low income families.

For all activists, taking a two-year break and hoping for a more supportive outcome next elections is not an option.

“We need to be an opposition,” said Hadar Susskind, director of Bend the Arc Jewish Action. “We need to make sure bad things don’t happen.” He noted the need to fight against cuts in funding or tax reform that would benefit big business but ignore individuals, alongside the need to seek programs and legislation items that can be passed even in a Republican-led Congress.

“It’s bad. A Republican Congress is less likely to move on our range of priorities,” Susskind said. “But there is still a lot to do and a lot of work that can be done.”