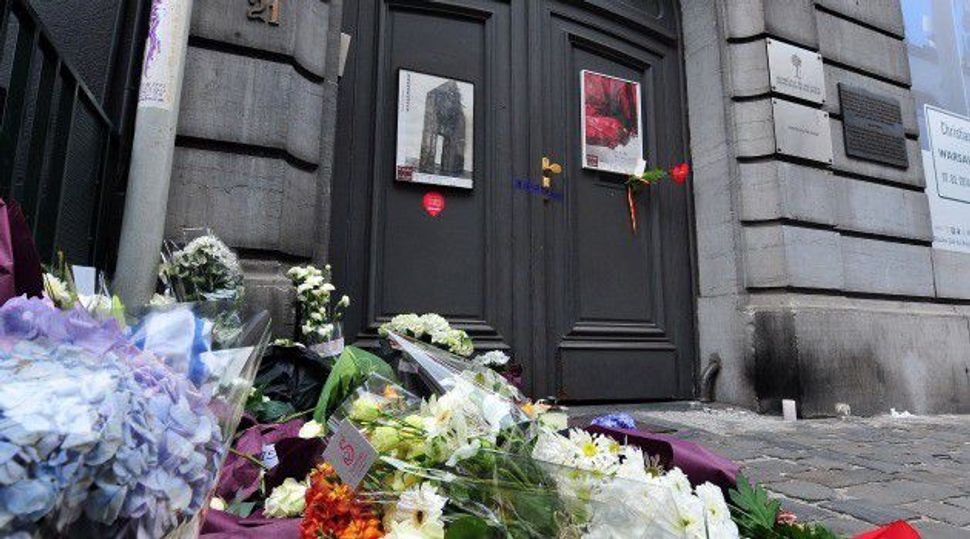 A makeshift memorial grows outside the Jewish Museum in Brussels, where an anti-Semitic gunman killed four people. Image by getty images

Ira Forman, speaking at the end of a conference for members of the Organization for Security and Cooperation in Europe on countering anti-Semitism, told the Forward on Friday that the threat of rising anti-Semitism in Europe should not be taken lightly.

“It’s hard to empty half a million Jews out of France in any short period of time, but I do think the viability of communities is a concern,” Forman said in a phone interview from Berlin, where the conference had been held. “If current trends continue or get worse, I can see some of the smaller communities essentially disappearing.”

This alarming message was voiced as 57 OSCE member countries convened to mark the tenth anniversary of the group’s previous summit on anti-Semitism, which was viewed as a landmark event in which world democracies vowed to take concrete actions to fight bigotry against their Jewish populations.

But progress on this issue has been slow.

“We’re not satisfied with the progress being made, but given the nature of the problem, it would be hard to be satisfied,” Forman said. He noted that while many actions have been taken since the 2004 conference, anti-Semitism on the ground has increased and in some cases, governments have not done enough to confront it. “We have to be very honest. A lot still has to be done,” Forman said. “A lot that has been pledged before has not happened.” One example of pledges not fulfilled was a commitment of all member countries to collect and aggregate data on anti-Semitic events and hate. Only 12 member states have implemented this decision in an adequate way.

Samantha Power, U.S. ambassador to the United Nations, headed the American delegation to the conference and delivered a stern warning to member countries. In her address to participants, Power cautioned that the rise of anti-Semitism threatens not only Jews in Europe but the overall values European democracies live by.

Choosing a loaded term to describe the threat facing Europe’s Jewish communities in light of the increase in anti-Semitism, Abraham Foxman, national director of the Anti-Defamation League said that if governments do not take action “they will provide Hitler with a posthumous victory of a ‘Judenrein’ Europe.” Foxman used the German term coined by the Nazis to describe an area free of any Jewish existence.

While avoiding use of this term, Forman did not disagree with Foxman’s warning regarding concerns for the future of European Jews. “This problem is not going away, under any circumstances,” he said. “It’s not going away.”

For the U.S. delegation, as for other participants in the OSCE gathering, one challenge in dealing with the wave of anti-Semitism was to avoid the pitfall of Islamophobia. Participants acknowledged the fact that some of the anti-Semitic incidents in Europe could be attributed to Muslims, but made clear that this is hardly the full picture. Forman pointed to surveys showing that almost half of Jews in France and in Hungary expressed their wish to immigrate because of anti-Semitism. But whereas in France anti-Semitism is pronounced mainly in Muslim circles, in Hungary, as in Greece, it comes from right-wing and neo-Nazi political parties.