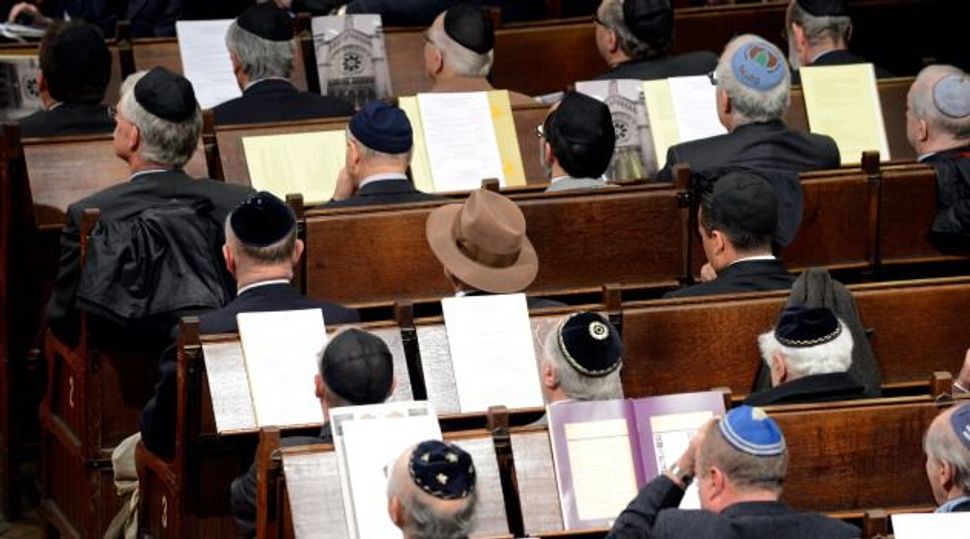 Jewish Belgium: Believers pray at the Great Synagogue of Europe in Brussels. Image by Getty Images

An Orthodox Jewish man who was stabbed in his neck in Antwerp in a suspected anti-Semitic attack was released from the hospital.

The victim, identified as Yehosha Malik, 31, sustained injuries classified as moderate on Saturday morning in the capital of Belgium’s Flemish Region, the Gazet van Antwerpen reported. He was discharged that day after medical staff determined his injuries were not life threatening.

In an interview with Hadrei Haredim, a Hebrew-language news website, Malik said he felt a jab to his neck “and saw a young man eagerly trying to stab again. Malik, an Orthodox Jew, was on his way to synagogue in the city’s center, where a population of roughly 16,000 Orthodox Jews reside.

According to Malik’s account, the attacker fled because another Orthodox Jew who witnessed the assault confronted the attacker.

“Seeing as the victim had no commercial activities, there is very real chance we are dealing with an act of pure anti-Semitism,” the region’s Forum of Jewish Organization wrote in a statement.

“The Forum, as representative of the Jewish community, is confident that the police services will employ every resource at their disposal to find the perpetrators and bring them to justice,” the statement said.

Moshe Kantor, president of the European Jewish Congress, called on European authorities to step up efforts to protect Jewish communities that are being targeted by Islamists and other parties.

“There is a war against the Jews on the internet and on the streets. Until there is a crackdown on incitement to hatred and anti-Semitism, then more people will believe that these types of attacks are legitimate,” Kantor said.

“We call on European authorities to form a specially dedicated pan-European body to deal specifically with the wave of anti-Semitism and the threat of radical Islam that threatens Jews and the continent of Europe.”

Rabbi Menachem Margolin of the Brussels-based European Jewish Association, said his group will set meetings with European Union officials to discuss “the severity of the situation and ways to combat such phenomena at their core, through education.”