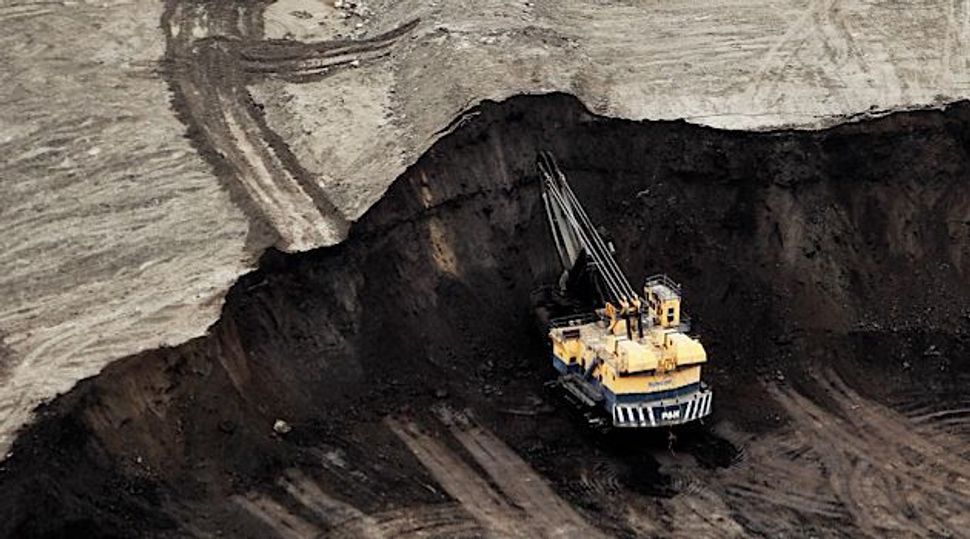 At the Start: The controversial pipeline would send oil from Canada’s tar fields — like this one near Fort McMurray, Alberta — to America for processing. Image by Getty Images

A looming decision on one of the most-debated environmental issues in recent years has exposed the Jewish community’s fundamentally different perceptions about what’s at stake: national security for America and for its ally Israel, or the battle against climate change.

The American Jewish Committee, one of the largest and most influential Jewish groups, has been lobbying the Obama administration and Congress to approve the controversial Keystone XL pipeline, a massive infrastructure project that would carry oil produced in Western Canada’s vast tar sands to refining facilities in the United States. AJC’s position reflects the group’s policy of viewing energy issues primarily through the prism of their impact on America’s ties to Arab countries and to Israel.

“Our goal is to have less petro-dollars going to the pockets of problematic regimes,” said Richard Foltin, AJC’s director of national and legislative affairs. The group has argued for years that the United States and Israel would be safer if America attained energy independence by no longer relying on Middle Eastern nations for its energy needs.

Meanwhile, most of the broader Jewish community has chosen to sit out the Keystone debate, leaving only a few smaller communal groups to uphold the traditional alliance between Jewish activism and the environmental movement.

Keystone XL, the final phase of a long- planned transnational pipeline project, is expected to enable Canada to ship 800,000 barrels of crude oil a day to the U.S. Gulf Coast from Alberta in Canada — nearly double Alberta’s current capacity. While similar pipelines exist throughout the United States, environmentalists have seized on Keystone as a symbol of the global warming threat. They have mounted a major campaign to highlight the climate change danger they say will come from releasing the carbon latent in the Canadian tar sands if they are exploited for oil consumption. The activists have also warned that leaks from the pipeline will contaminate land and water aquifers and wreak environmental damage. Keystone supporters, meanwhile, point to a series of huge accidents involving the shipment of oil by rail to argue that this concern is misplaced.

As a result of the environmentalists’ efforts, the State Department froze its approval of the project in 2012 — a presidential election year — in order to conduct further environmental tests. In November of this year, the Republican-dominated House of Representatives tried to force a decision via legislation, but a Democratic majority in the Senate defeated the bill.

Now the decision on whether to approve the project is in the hands of President Obama.

Following the vote in Congress, AJC issued a statement reiterating its support for the pipeline and urging the administration to approve the project. “Transporting oil via pipelines is safer, more energy efficient and more reliable than importing it through tankers from the Middle East or elsewhere,” the group said, calling the Keystone pipeline “critically important” for energy security in the United States.

AJC, an early supporter of the project, has backed many other efforts in the past to increase domestic energy production, including offshore drilling and hydraulic fracturing. The group has made clear, however, that it supports appropriate regulations and safeguards to protect the environment.

Lately, rapidly falling costs for solar and wind energy production have enabled utility companies to buy energy from these alternative sources at prices below that of natural gas. But AJC officials say that these alternatives still will not provide an answer for short-term energy needs.

“There are many arguments on each side, but at the end of the day we are involved in this because of our view that energy security is important for national security,” Foltin said.

Efforts to curb America’s dependence on fossil fuel, he said, should focus on limiting demand through conservation and energy efficiency, not on blocking the supply of oil.

AJC’s concern about America’s dependence on Middle East oil dates back to the 1973 Arab oil boycott, following the Yom Kippur War. The embargo, which was felt by every American at the gas pump, gave birth to the quest for an energy policy that would free America from its dependence on Arab nations. While every president since has set this as a goal, it has only been during the past decade that the United States has moved closer to this benchmark. Oil imports have decreased steadily since 2005, and local production is on the rise. The United States now buys only 40% of its oil from overseas.

But for AJC, energy independence is about more than lines at the pump. The group believes that weaning America off Middle Eastern oil would deprive Arab countries from any leverage they may have in influencing America’s foreign policy, mainly as it relates to Israel. An added argument in recent years has been that given the volatility of regimes in the Middle East, as demonstrated in the Arab Spring, America might face instability in prices or in supply, if and when political upheaval envelops these Middle Eastern countries.

But much has changed since 1973. Now, not only does the United States produce more oil and natural gas, it also relies primarily on Canada and Mexico for the bulk of its oil imports. These two North American neighbors today account for 44% of U.S. oil imports. Oil from the Middle East, including Saudi Arabia, Kuwait and Iraq, amount to only a quarter of America’s total imports.

In the organized Jewish community, AJC has always been an outlier when it comes to energy. But in the battle over the Keystone project, many other communal players are keeping quiet, in a break with their usual alignment with environmentalists.

The Jewish Council for Public Affairs, an umbrella group of national organizations and local community relations committees, has declared global warming to be one of its top priorities. Among other things, the JCPA sponsors the Coalition on the Environment and Jewish Life. But the group has not taken any stand on Keystone, a project all major national environmental groups have been fighting forcefully. This is because the JCPA requires consensus among its members to adopt a policy. With AJC as a key constituent member, such an agreement is hard for the group to achieve.

“The policy of JCPA and of COEJL is that we don’t want to do things that exacerbate climate change, but we don’t have a consensus to set policy on the issue,” said Jared Feldman, the JCPA’s Washington director. “Our focus is on looking forward. How do we bring down demand [for fuel], and how do we find alternative energy sources?”

The Reform movement’s Religious Action Center, which views fighting climate change as a key issue, chose not to take a clear position regarding the pipeline. In an August 7 letter to Obama, Jennifer Brodkey Kaufman, who chairs the Commission on Social Action of Reform Judaism, voiced the group’s concerns over the project’s environmental impact, but said that the Reform movement will “take no position on approval of the pipeline.”

It is only progressive environmentalists within the Jewish community who have opposed the Keystone project. The Philadelphia-based Shalom Center and other small groups have joined protests against the pipeline and are mobilizing their members to take action now that decision time is nearing. Rabbi Arthur Waskow, founder and director of the Shalom Center, argued that those who worry about Israel should be especially concerned about climate change, which could cause tremendous damage to the country.

Waskow, 81, who was arrested last year during a Keystone protest, called on Jewish groups, including AJC and the American Israel Public Affairs Committee, the Washington-based Israel lobby group, to support a carbon tax to help limit demand for fossil fuels. “If I were [Israeli Prime Minister Benjamin] Netanyahu, I’d come to [these groups] and ask them to demand a carbon tax for the sake of Israel and for the sake of the United States,” he said.