What Does the Madoff Name Mean 6 Years Later? 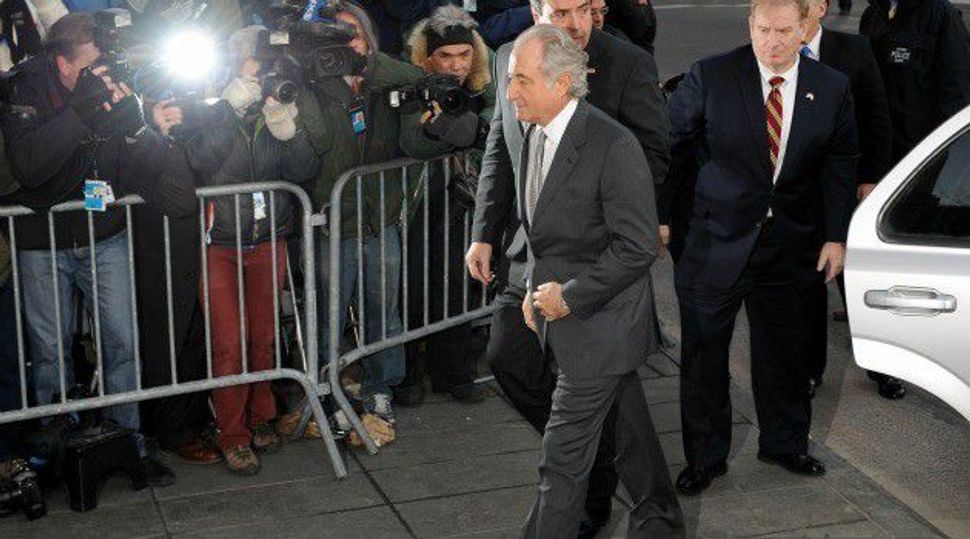 The name of the most reviled member of the American Jewish community hangs in a place of honor in the lobby of the Center for Jewish History, in Manhattan.

In a field of plaques commemorating donors to CJH, one stands out. Below etched lines naming the CEO of the World Championship of Ping Pong and the scion of a powerful Cleveland real estate family is the name of a man who has fallen from the heights of Park Avenue to a federal correctional facility in North Carolina: Bernard Madoff.

Six years after Madoff’s indictment in a multibillion-dollar Ponzi scheme, and five years into his 150-year prison sentence, Madoff’s name has yet to be scrubbed by CJH. That plaque appears to be the only remaining public honor held by the convicted felon, who once sat on the boards of Yeshiva University and New York City Center.

CJH has no plans to remove Madoff’s name or that of his wife, Ruth Madoff. “The Center for Jewish History received a gift from Mr. Madoff in 1999, when the institution was being built,” CJH’s executive director Joel Levy said in a statement to the Forward. “At the Center, we preserve history. We don’t rewrite it.”

As the Madoff affair recedes into history, the meaning of the scandal is still in flux. The Madoff name remains poison to many. But others see the Ponzi schemer as a fall guy for a system that failed. Still others wonder how the public suffering of his family since his arrest will ultimately affect how the Madoff family is remembered.

Shakespearean havoc has been wreaked on Madoff’s children since the collapse of the Ponzi scheme. His elder son, Mark Madoff, hanged himself with a dog leash on the second anniversary of his father’s arrest, in December 2010. He was 46. This past September, Madoff’s younger son, Andrew Madoff, died of cancer at age 48. Unlike his mother, who has almost disappeared from public view since her husband’s arrest, Andrew Madoff lived a public life in his final years.

“I think it’s true that Andrew Madoff’s experience, his somewhat public battle with cancer, his refusal to lie low and to reject the Madoff name himself, has affected the conversation somewhat,” said Diana Henriques, who covered the Madoff scandal for The New York Times and wrote a 2011 book about it, called “The Wizard of Lies.”

Still, that’s far from enough to clear the Madoff name, Henriques said. “Despite… Andrew Madoff’s visible courage and gallantry as he approached his own death, despite that, I think the Madoff name is a long way from being cleansed of the terrible weight of Bernie Madoff’s crime.”

Madoff’s victims remain financially devastated. In addition to the thousands of people with large sums invested with Madoff and his several feeder funds, Jewish groups like Hadassah and Y.U. are still managing the fallout from the scandal. Hadassah paid $45 million to a court-appointed bankruptcy trustee to settle so-called “claw-back” claims on illusory gains that the group earned from its Madoff investments.

Since Madoff’s fall, there have been new additions to American Jewry’s communal demonology. Just last April, William Rapfogel, the former CEO of the Metropolitan Council on Jewish Poverty, pleaded guilty to stealing $9 million from the taxpayer-funded group he led. But no name has so far overshadowed Madoff’s as a dark invocation in the hallways of the Jewish institutions.

“It’s a codeword in the organized Jewish community, and that codeword can mean everything from fraudulent activity to lazy governance,” said Mark Charendoff, former president of the Jewish Funders Network and current president of the Maimonides Fund.

Of the $17.5 billion invested in Madoff’s fraudulent scheme, nearly $6 billion has been paid back to the victims, according to the office of Irving Picard, the court-appointed bankruptcy trustee charged with doing what he can to recoup the losses Madoff’s victims suffered. That $6 billion is a share of the $10.5 billion recovered in other lawsuits and settlements. Those efforts have cost $1 billion in legal fees.

Still, some observers suggest that Madoff’s own sins were made to stand in for the broader, more inchoate sins of a banking system that was collapsing at the same time the Madoff Ponzi scheme fell apart. “Madoff was a curiosity,” said Forward columnist J.J. Goldberg, author of the book “Jewish Power: Inside the American Jewish Establishment.” “What he did was so blatant, it became a distraction. It allowed us to vent emotions over the disaster without addressing anything larger.”

To Goldberg, the Madoff name is a side issue. “It’s really not about him,” Goldberg said. “It’s about a system, first of all of finance, that’s all about increasing the profits of the gamblers.”

It doesn’t appear that any other honors to the Madoff name remain, aside from the CJH plaque. City Center, the Manhattan theater on whose board Madoff served, said that there had never been any plaque or sign there honoring Madoff. Y.U. did not respond to two emails from the Forward requesting information.

Other institutions to which Madoff and his wife donated large amounts of money through their foundation, including the Gift of Life Bone Marrow Foundation and Memorial Sloan Kettering Cancer Center — where Andrew Madoff later died — also did not respond to the Forward.

Although it’s not clear that Madoff’s name was actually scrubbed from any plaques, there would have been precedent for such a step in Jewish communal history. In 1986, after the investor Ivan Boesky was forced to pay a $100 million fine for insider trading, the Jewish Theological Seminary erased his name from a new campus library he had funded. The school at the time said that Boesky himself had asked that his name be removed. It would not say how much of the pledge that put his name on the library door had actually been paid.

Some disgraced white-collar criminals have since bought their way back into the Jewish community’s good graces. Michael Milken, a former associate of Boesky’s who served two years in prison for security fraud, has since reinvented himself as a philanthropist. There’s now a Milken Institute School of Public Health at George Washington University, and a Jewish day school in Los Angeles called the Milken Community High School, not to mention a Milken Family Campus at Ariel University in the Israeli-occupied West Bank.

It seems highly unlikely that such rehabilitation will be accorded to the Madoff name.

“America is a place that asserts a belief that you can pay your debt to society and turn the page and start a fresh version of your life,” Henriques said. “Madoff doesn’t fall into that category…. He has turned over no new leaf. He has started no new life. He can build nothing.”

As for whether the Jewish community has learned anything from the scandal, observers are noncommittal.

Charendoff said that some groups improved oversight of their investments following the scandal. But he added: “Has it affected everyone’s behavior? No. Like any wakeup call, there are going to be multitudes of people who roll over and press the snooze button and go right back to bed.”

What Does the Madoff Name Mean 6 Years Later?