Jewish and Palestinian Children Learn Together at Jerusalem ‘Greenhouse’ of Coexistence 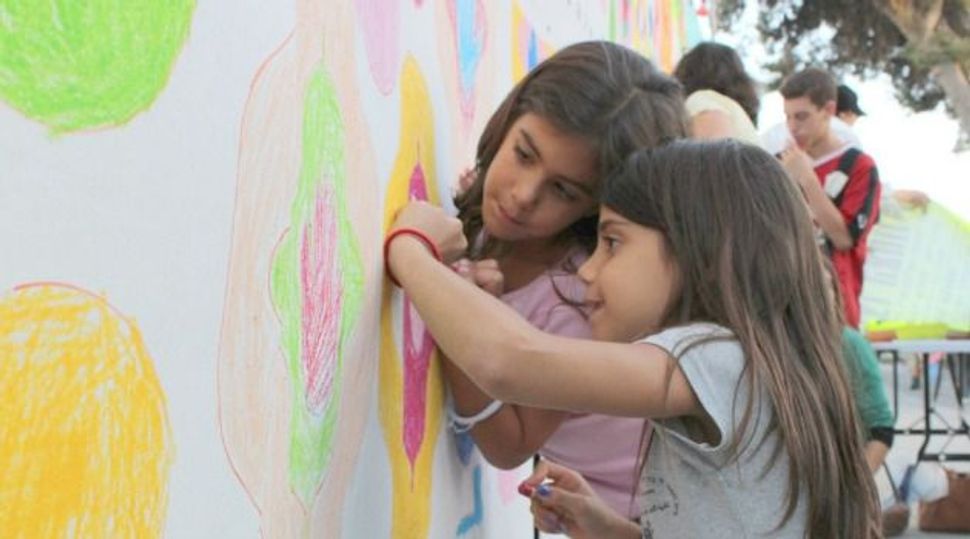 Jewish and Arab students working on a project together at the Max Rayne Hand In Hand Jerusalem School.

Rawan Masalha and Inbar Shaked-Vardi were in their ninth-grade geography class earlier this year when a fight began over the name of their textbook, “Israel: Its People and Area.”

“The Palestinian students started saying, ‘Why Israel? Why not Palestine?’ They didn’t want to use the book,” recalled Shaked-Vardi, 14, a Jewish student from western Jerusalem.

She and Masalha, also 14 and from eastern Jerusalem, recalled their Palestinian classmates changing “Israel” to “Palestine” as they read aloud from the text.

“Some of the Jews felt it’s Israel, it’s the land their grandparents helped build,” Masalha said. “But for Palestinians, it’s the place where 300 years ago their ancestor had his orchard. The Jews said it’s the Land of Israel, the Arabs said it’s Palestine.”

Masalha and Shaked-Vardi are two of more than 600 students at the Max Rayne Hand In Hand Jerusalem School, Israel’s largest joint Arab-Jewish school and the only such primary and high school in the city.

Hand In Hand is the biggest and most intensive of a handful of youth coexistence initiatives in the city, which has seen Jewish-Arab tensions rise following a recent spate of violence.

At Hand In Hand, students attend classes in Hebrew and Arabic, celebrate Jewish, Muslim and Christian holidays, and engage in a weekly current events dialogue. They learn both the Israeli and Palestinian historical narratives.

The past year has been a challenging one for the school. Classes have struggled to confront the effects of war in Gaza this summer, the kidnapping and murder of three Israeli teenagers and the killing of a Palestinian teen in response, and recent deadly attacks in Jerusalem, including the killing of four Jewish worshippers and a police officer last week at a synagogue in the haredi Orthodox neighborhood of Har Nof.

“You come to school charged,” said Tala Jbarah, 15, a 10th-grader from eastern Jerusalem. Efforts to separate politics from her life at school, she said, have been “very hard.”

Located on a campus in western Jerusalem, Hand In Hand seeks to be an island of peace in a city riven by conflict. The goal, says middle and high school principal Arik Saporta, is to have students confront intolerance, not to isolate them from it.

“We’re not a bubble, we’re a greenhouse,” Saporta said. “A bubble is shut off from what’s outside. A greenhouse brings the outside inside, but also holds the plants so they can grow outside.”

Beyond school, students face a difficult climate. Recent polls suggest that younger Israelis are more extreme than their parents.

One survey conducted ahead of last year’s national election found that among voters under 30, the most popular party was Jewish Home, which supports Jewish settlement in the West Bank and opposes a two-state solution to the Israeli-Palestinian conflict. Jewish Home placed fourth in the election.

A poll conducted in 2010 found that majorities of Israeli high-school students preferred strong leaders over the rule of law and believed that state security concerns should trump democratic values.

Young people involved in coexistence projects say xenophobic attitudes have flared on both sides because of this year’s violence. Samia Nustas, 16, an Arab resident of eastern Jerusalem who sings in a Jewish-Arab choir at the Jerusalem YMCA, says that a friend chided her for associating with Jews.

Students understand that when they become adults, they will enter a largely separated society. Most Jewish students will enter a military conscription that could have them manning a West Bank checkpoint.

Michael Mintz, 14, is a participant in Heartbeat, an afterschool program where Jewish and Arab teens make music together that is supported by American rock stars Neil Young and Eddie Vedder. Serving in the West Bank, he says, is an opportunity.

Despite the challenges, teenagers and activists say the coexistence programs are succeeding in fostering mutual empathy across the ethnic divide. On Monday night, the YMCA choir, which combines dialogue on current events with vocal training, sang a rousing cover of Adele’s “Rolling in the Deep” after a rehearsal led in Hebrew and Arabic.

“They can’t talk about everything all the time, but it’s in everyone’s hearts and minds,” said Noa Yammer, Hand In Hand’s communications coordinator. “If you’ve been with Jews and Arabs, and spoken Hebrew and Arabic since you were 4 years old, there’s something more natural about it. You can weather these things.”

Though the coexistence programs do outreach to parents, visit other schools and take trips abroad, they remain relatively small, with fewer than 1,000 total participants out of a total youth population in Jerusalem numbering in the hundreds of thousands.

A YMCA staff member says she has trouble recruiting Jewish participants to her programs because most of the interested Jewish kids already attend Hand In Hand. The YMCA, which has brought Jews and Arabs together in joint programs for decades, also has a Jewish-Arab kindergarten, a youth videography workshop and leadership training programs.

Those who do participate say the challenges of the past few months have only made them more resilient.

At Hand In Hand, the argument over the geography textbook continued throughout that day, Masalha and Shaked-Vardi recall. But the following morning, it was all but forgotten.

“We got there the next day, and all we saw were our friends,” Shaked-Vardi said. “We can forgive them and laugh.”

Jewish and Palestinian Children Learn Together at Jerusalem ‘Greenhouse’ of Coexistence