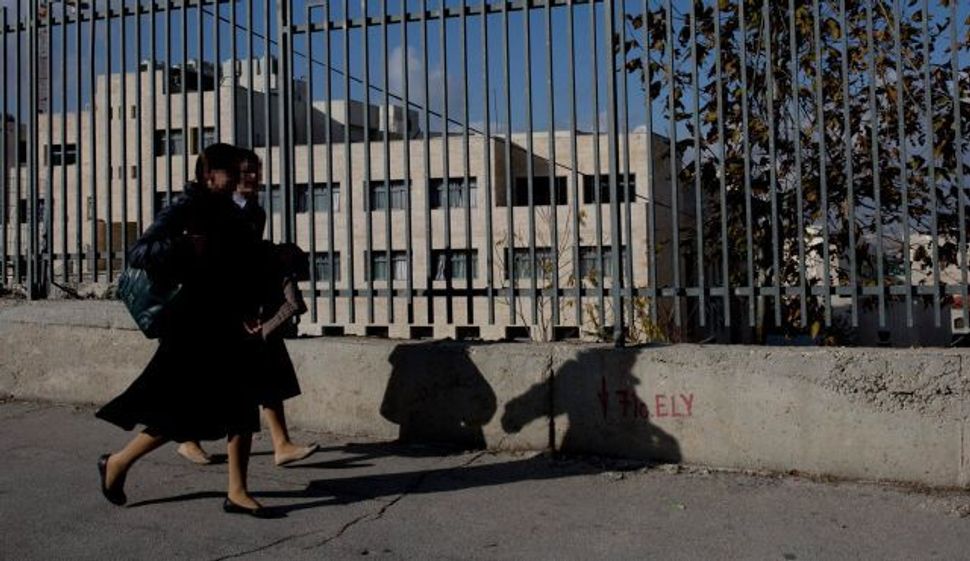 Women walk by Pnunim seminary in Jerusalem, one of several school at which a rabbi is accused of molesting girls. Image by haaretz/tali meyer

The four girls seminaries — Pninim, Binas Bais Yaakov, Chedvas Bais Yaakov and Keser Chaya, which are located in Jerusalem and have a large number of American students — were sued in August in Chicago in a class action suit filed by families demanding their money back for the current academic year, after they became aware of sexual assault allegations against the rabbi who was running the seminaries at the time.

Meisels, who is described in the suit as an American with a residence in Jerusalem, was accused by plaintiffs of sexually assaulting an undetermined number of American and Canadian girls at the seminaries between 2004 – around the time he “founded or co-founded” the seminaries – and 2014. Meisels has denied the allegations, according to an August article by JTA. Through his attorney, Meisels declined to comment to Haaretz.

According to the seminaries, Meisels is no longer in charge of operations.

In addition to Meisels, three other individuals, all of them American citizens, were also named as defendants – Yaakov Yarmish, a member of the seminaries’ management, who is based in Israel; Rachel Slanger, who according to the suit is Meisels’ sister and is based in the U.S.; and Rabbi Tzvi Gartner. According to the suit, Yarmish and Gartner were “believed to be in control of Peninim of America Inc.,” the non-profit that handles financing for the institutions in the U.S., along with Meisels. Gartner is also a member of an Israeli beit din, or rabbinical court, established in wake of the accusations.

The other defendants named in the suit were the seminaries themselves; Peninim of America, Inc.; and “as yet unknown co-conspirators.” All defendants were accused by plaintiffs of fraud. Meisels is the only defendant against whom allegations of sexual assault have been made in the lawsuit.

No arrests have been made in the Meisels case in Israel, the only country with jurisdiction to prosecute.

David Morris, the head of Magen, an Israeli nonprofit that specializes in the prevention of child abuse and which has reached out to possible victims, told Haaretz that as far as he knows no complaints have been made to the police in Israel and that “to the best of my knowledge there is not yet a police investigation.”

The case has slipped “under the radar” in Israel, says Morris.

According to plaintiffs in the U.S. civil suit, Meisels used the seminaries as a “front” to “fraudulently and unlawfully take thousands of dollars from each of these parents and to induce these girls, by telephone, mail, wire and other means, to travel thousands of miles outside the United States and away from their parents for the purpose of sexually assaulting these vulnerable young girls.” The suit also alleged that students’ reputations were threatened – something that would jeopardize future marriage prospects in Orthodox circles – in order to keep them quiet.

In addition, in the suit the plaintiffs accused certain seminary staff members of complicity in defrauding parents of fees, and “as yet unknown co-conspirators” of “actively and passively concealing the assaults,” and of continuing to “cover up defendant Meisel’s sexual assaults and fraud by failing to report the assaults to the authorities.”

The plaintiff’s attorney, Nathan, confirmed that 13 families settled the case and will receive a full refund of fees they paid for this academic year. Nathan estimated that more than 10 other families are still seeking refunds, but said they are dealing directly with the seminaries.

“There is a roadmap for parents to follow that haven’t received justice yet,” he told Haaretz, referring to the settlement, “and I hope that all those still seeking justice, get justice.”

The seminaries’ management told Haaretz in an email that the seminaries had taken “all appropriate action” to ensure student safety. “To this end, Rabbi Meisels is no longer involved with the seminaries, they have come under complete new management, instituted written guidelines and controls, and are under the auspices of a va’ad ruchni (spiritual council).” They added that they are operating under the guidance of The Crisis Center for Religious Women, which is part of the network of the Association of Rape Crisis Centers in Israel, and that they have “indicated complete willingness to fully cooperate with any and all fair and duly constituted inquiry into said allegations.”

From Chicago to Jerusalem

Although the alleged sexual offenses were said to have taken place in Israel, the scandal first came to light across the Atlantic this summer, after students who said they had been victimized by Meisels approached a Chicago beit din specializing in cases of abuse, according to the lawsuit. The lawsuit was filed after that rabbinical court issued a public letter in July – an unusual, unprecedented step – saying students at the seminaries were “at risk of harm.” The letter also said “a distinguished Israeli beis din” consisting of three rabbis “has assumed responsibility for the matter.” This private rabbinical court was comprised of Rabbis Menachem Mendel Shafran, Chaim Malinowitz, and Tzvi Gartner, a defendant in the U.S. suit.

A woman walks past the Pninim seminary. Photo by Tali Meyer

A few days later, the Israeli rabbinical court released its own statement, saying “the party responsible” had been removed and that the institutions were safe.

The Chicago rabbinical court was not satisfied, however. Following other exchanges during the summer, on September 4, it sent a further letter to the seminaries’ U.S. attorney — who is representing all the defendants but Meisels — saying it was still waiting to see proof that Meisels was “removed from financial control” of the institutions. In their civil suit, the plaintiffs alleged a “sham ‘sale’” had taken place.

Furthermore, the Chicago rabbinical court said in its letter that, “based on the evidence received so far,” a “very limited number” of other staff “may need to be removed from their positions in order to ensure a safe educational environment and restore a culture of compliance.”

Yarmish, one of the defendants in the lawsuit and a member of the seminaries’ management, would neither confirm whether these steps had indeed been taken nor comment on the specifics of the letter, which was published on the Frum Follies blog, and which the Chicago rabbinical court confirmed it did indeed send.

“There are ongoing processes that are dealing with all outstanding issues, all relevant parties are aware of these processes, and we cannot comment further,” he said, responding to an inquiry from Haaretz.

According to sources close to developments, last month students gave testimony regarding the allegations of assault against Meisels in a teleconference between rabbis from the rabbinical courts in Israel and the U.S. that have been involved in the case, and representatives of the seminaries, in an effort to break the impasse between the two rabbinical courts.

In the wake of allegations

Since the story became public in July, little was heard from students at the seminaries themselves outside of the Chicago rabbinical court – perhaps not surprising given the taboo nature of abuse and assault in the Orthodox community. Haaretz reached out to students but was unable to speak with them. In early November, however, one American ex-student of Pninim and Chedvas Bais Yaakov, Michal Ben-Baruch, launched a petition on Change.org, demanding that seminary staff publicly apologize to “Elimelech Meisels’ victims.” The 178 signatories from the U.S., Israel, U.K., Canada, Australia, and elsewhere, demanded that the seminaries’ staff “face the problem and finally take responsibility for the horror that happened under their watch for so many years.” The petitioner, who does not allege she was assaulted, says she sent her document to the seminaries and to individual faculty members. The management did not respond to requests for comment on the petition.

Following the allegations, two U.S. colleges have suspended their affiliation with the four seminaries. Touro College in New York and Hebrew Theological College in Illinois, which previously were affiliated with the four seminaries named in the suit, suspended ties with them in August. Hebrew Theological College said it suspended the partnership “in light of the conclusion and recommendation of the Special Beis Din of Chicago.”

Touro College, which noted that it has “a multitude of seminary affiliations in Israel,” would not comment on the reason for suspending its partnerships with the four seminaries. These suspensions mean that students are not eligible for college credit and financial aid for time spent at the seminaries.

In Israel, however, Masa – the government and Jewish Agency-funded organization that runs study, volunteer and internship program for young Jews from around the world – says it is retaining its connection Pninim, the only one of the four seminaries with which it is affiliated.

“At this stage, the program is ongoing,” a Masa spokeswoman confirmed to Haaretz, commenting on its partnership with the seminary. As part of its cooperation with Pninim, Masa gives scholarships to girls to attend the seminary.

Asked whether it believed that Pninim was safe for students, the spokeswoman said it had “received detailed information on actions that were taken recently in light of the incident, and we continue to monitor and [provide] support.”

According to Masa, those moves included instituting a policy on dealing with assault and abuse, and setting up a student hotline. Masa said that in the wake of the allegations, it spoke with the seminary’s management, rabbis from the Israeli rabbinical court involved in the case, representatives of the Chicago rabbinical court, and also a new female staff member at Pninim.