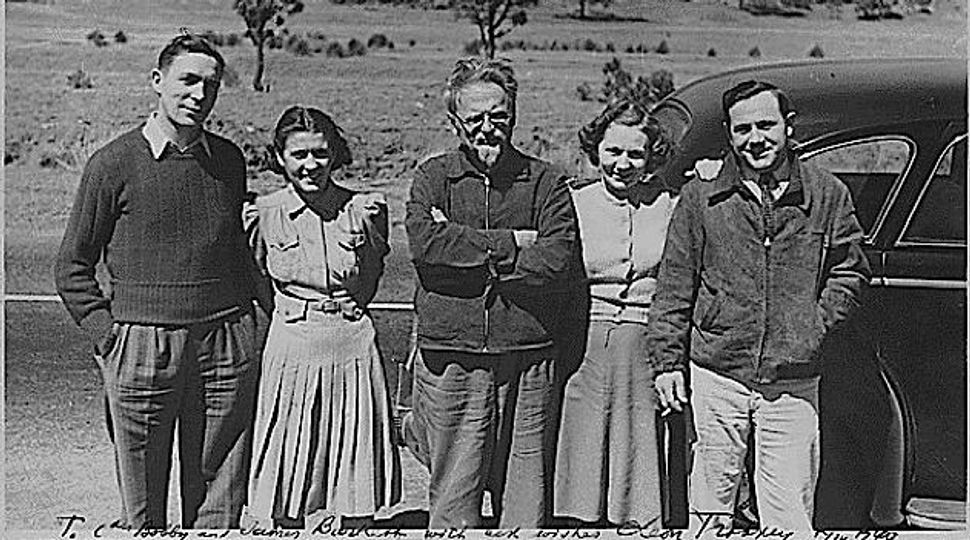 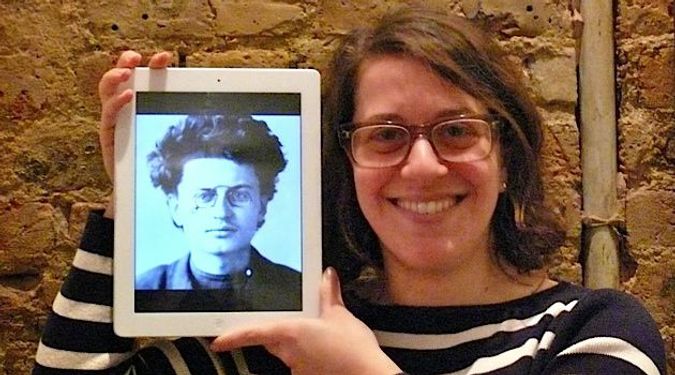 My great-aunt made the revelation offhand, as if pointing out the drizzle outside her Geneva apartment. I was sharing sushi with her and my great-uncle last month, when she mentioned a new novel I should read, “The Man Who Loved Dogs,” about the assassination of the Russian revolutionary leader Leon Trotsky. “Oh yes. Did you know we’re descended from Leon Trotsky?”

“What?” I said. How had my great-aunt, grandmother, mother and cousins all withheld (or not known about) this major piece of lineage my whole life?

Trotsky, she told me, was born Lev Davidovich Bronshtein, and Bronshtein was my great-grandfather’s mother’s maiden name. Trotsky was the brother of my great-great-grandmother (so, technically I don’t descend from him, but he and I both descend from his mother). My great-great-grandmother and her family left Russia for South America in the early 1900s, while her brother Leon and his family stayed. Her son, my great-grandfather, had adistant relationship with his children and rarely spoke about his family, much less about specific relatives, such as an uncle back in Russia.

I had to wonder what else he never told us, but at least this information made it to my great-aunt, and then me. Trotsky was my great-great-great-uncle. Uncle Leon! (Only one letter away from Uncle Leo of “Seinfeld,” another unforgettable figure.)

I pictured my return home. Unlock the bolt, open the door, and before my roommate could greet me from behind her laptop, l declare, “I am a descendant of Leon Trotsky!” It wasn’t defining enough to go on the Instagram profile, but it might make it into a tweet (“Exciting discovery: Leon Trotsky is my ancestor. #whattafamily. #trotskyite”), and would definitely be my Halloween costume. 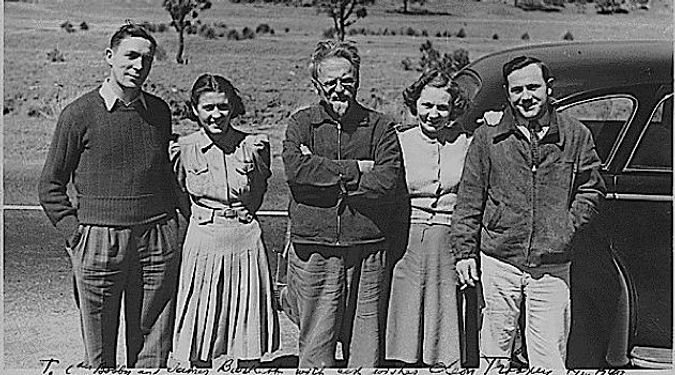 Before I got to that, I needed to take care of one thing: I actually knew very little about him, beyond that he was Russian and involved in their revolution, whose factions and other details still confuse me. So I did what any millennial would do: scoured Wikipedia, Encyclopedia Britannica, BBC, Biography.com, the Guardian and Slate, to find out all the connections between us.

First, Trotsky was Jew-ish (born Jewish, rest of life questionable) — so am I. He was a Marxist — I’m left-wing, have read “The Communist Manifesto” and visited Marx’s grave. He had wavy brown hair and glasses — me too. He changed his name — I’ve thought of going by my nicer-sounding Spanish middle name, Felisa. He spent some years living in London — I’ve lived in London for four. While in London he wrote for the socialist newspaper Iskra — I edited my university’s weekly paper and still work as a journalist. He published the essay “Results and Prospects” — I just wrote an essay for the Jewish New Year urging more purposeful, active living. He was detained in Canada in 1917 by the Tsar’s secret police, while trying to return to Russia — I grew up in Canada. He spent years trying to reconcile warring factions of the Russian Social Democratic Labor Party — I’ve reconciled the sparring egos of theater and marketing folk. His apparent intellectual arrogance alienated some of his comrades — a number of people (even including my mother) have called me pretentious while rolling their eyes. He had two marriages and various affairs — I can’t maintain a relationship.

Besides his arrest, exile and involvement in killing people in the Russian Revolution and Civil War, I concluded we’re basically the same. The thrust of our politics, our self-starting nature, and refusal to accept injustice or oppression: It is all there. This man was my blood. My ancestry clearly predestined my life choices. Anything radical or ballsy I now did, well, I was Uncle Leon’s niece.

For someone whose family balked at her choice to leave a stable corporate job for a creative career, Trotsky became my beacon. “Look,” I could point to all of them. “Revolution, forging new trails — artistically: It’s in my blood. It’s practically required!” The Bronshteins who docked in Argentina turned bourgeois. My great-grandfather became a multi-tenant landlord. They joined the middle classes, summered at the sea, married young and farted only in bathrooms. My grandparents spent their teenage years in the socialist-Zionist youth movement Hashomer Hatzair, then ended up with two houses (while standing by the fair distribution of wealth). My centrist, professional parents never even dabbled in the left.

The more people I told about Uncle Leon, the more I learned about the relative I deemed my new soulmate. My friend Calum: “He was killed by an ice pick.” (Yikes.) My friend Chris: “You’re lucky they didn’t assassinate your family.” (Hadn’t thought about that.) Another Chris: “Didn’t The Stranglers have a song about him?” (Indeed. “No More Heroes” starts: “Whatever happened to Leon Trotsky?/ He got an ice pick/ That made his ears burn”) My friend Sonia: “He lived with Frida Kahlo and Diego Rivera for awhile. People say he and Frida had an affair.” (I only wish a symbol-filled painting had come out of it.)

I realized, of course, that Trotsky’s political action reached far deeper than mine ever had. I found myself wanting to relive everything since high school (when my political consciousness could have started) knowing who I really was. I’d write subversive op-eds for the school paper about the lingering classism, rather than copyediting the yearbook. I would join — or even found — a political group, instead of co-leading peer tutoring. Think of the credibility, the conviction I could have on the debate team, attacking issues like multiculturalism with the Red Army founder’s backing. 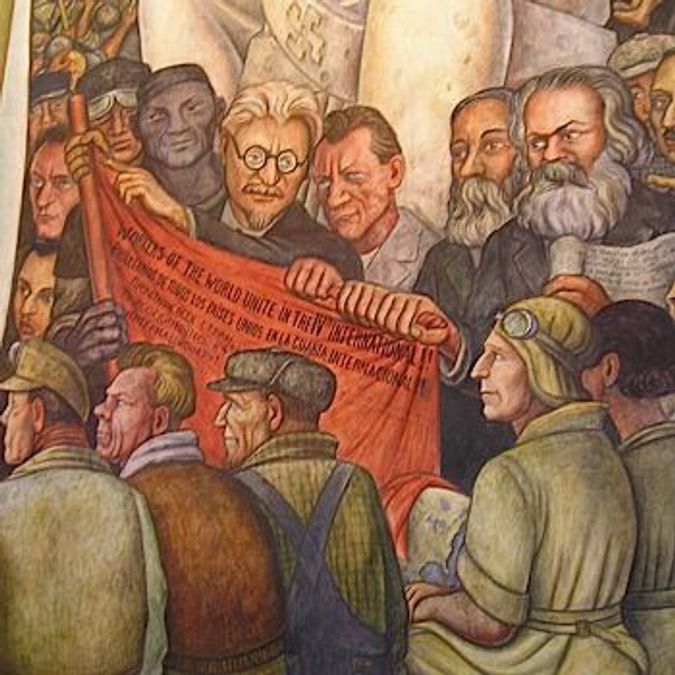 No more wavering in my convictions, I decided. What kind of self-proclaimed Trotsky descendant can resign herself, long before middle age, to withering in ambivalence? Not to mention that some of my friends, unrelated to any revolutionary leader, are politically active full-time — working in government, campaigning on climate change and native rights.

The torch has passed to my sister and me, and we will hold that thing as high as our short Russian Jewish genes allow. This time around, I’m sticking to my Jewish New Year’s pledge to politically engage.

My roommate and I already recycle and compost, don’t eat meat, and get a organic fruit and vegetable box each week through a community-supported agriculture organization. I mostly get around by bike. I just made a donation to support the protests against a proposed oil pipeline through a suburb of my hometown of Vancouver, British Columbia. I signed up for my municipality’s online citizens’ panel to give feedback on issues in my community. I’m looking into canvassing for the UK general election in 2015. And Cuba is next on my travel list.

I know that composting the tops of my organic carrots is no manifesto, but I’m also not killing anyone or starting wars. For Uncle Leon’s lifelong ambition and determination, I wear my lineage with pride. I can’t wait to tell everyone who cares to hear it that I’m a Trotskyite in my veins. Let’s just hope no one comes after me with an ice pick.

Tamara Micner is a playwright and freelance journalist in London.