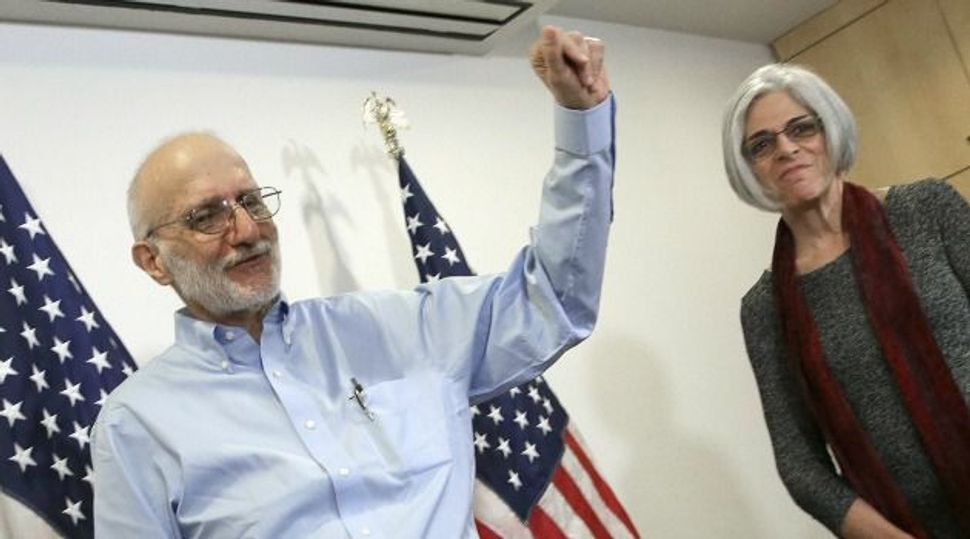 (JTA) — Alan Gross was imprisoned while trying to connect Cuba’s isolated Jewish community to the wider world. The deal that got him released five years later may do just that and much more.

Gross’ flight home to suburban Washington on Wednesday with his wife, Judy, was part of a historic deal that overturns over five decades of U.S. policy isolating the Communist island nation helmed by the Castro brothers.

“We will end an outdated approach that for decades has failed to advance our interests and instead we will begin to normalize relations between our two countries,” President Obama said in announcing Gross’ release and radical changes in U.S. Cuba policy.

U.S. officials in a conference call outlined sweeping changes, including the resumption of full diplomatic relations, the opening of an embassy in Havana, and a loosening of trade and travel restrictions.

Dina Siegel Vann, the director of the American Jewish Committee’s Belfer Institute for Latino and Latin American Affairs, said Gross’ release and the opening of ties with Cuba is a twofer for the Jews: In addition to the benefits accrued to all Cubans from open relations, she said, Cuban Jews “will have stronger ties to Jewish organizations, they will be much more in the open.” An estimated 1,000 to 1,500 Jews live in Cuba.

Gross, who is now 65, was arrested in 2009 after setting up Internet access for the Cuban Jewish community while working as a contractor for the U.S. Agency for International Development. Never formally charged with espionage, Gross was convicted in 2009 for “crimes against the state.”

Back in the United States on Wednesday, Gross held a news conference, which he began with the greeting “Chag sameach,” noting that his release coincided with the first day of Hanukkah. He thanked political leaders, the Washington Jewish community, the local Jewish Community Relations Council and other faith groups that pressed for his release.

“But ultimately – ultimately – the decision to arrange for and secure my release was made in the Oval Office,”said Gross, reserving special praise for President Obama and his National Security Council.

Vann said improved U.S.-Cuba relations would have a rollover effect, removing obstacles to U.S. ties with other Latin American countries — and this in turn would remove tensions that have affected Jewish communities.

“Cuba and Venezuela have a very interdependent relationship,” she said. “Anti-Semitism and anti-American rhetoric are being used by the regime in Venezuela, and with this that’s being undermined.”

Daniel Mariaschin, who directs B’nai B’rith International, a group with a strong Latin American presence, said a new era of ties “will raise the profile of Latin American communities and interest in those communities.”

In a deal American officials said was technically separate from the Gross release, the United States and Cuba agreed to exchange the three remaining incarcerated members of the “Cuban Five,” a Florida-based spy ring, for an American spy held in Cuba for 20 years and whose identity remains a secret.

Obama insisted that Gross was not part of the spy exchange and that, in fact, his imprisonment held up changes to the U.S. Cuba relationship he had intended on initiating years ago.

“While I’ve been prepared to take additional steps for some time, a major obstacle stood in our way,” the president said, referring to Gross’ “wrongful imprisonment.”

Republicans who have opposed easing the Cuba embargo blasted the deal.

Sen. Marco Rubio (R-Fla.), the son of Cuban immigrants, told Fox News that Obama was “the worst negotiator since at least Jimmy Carter, and maybe in the history of this country.”

Many Jewish groups welcomed the deal, however, and noted the political difficulties it must have created for the Obama administration.

“We know the decision to release the Cuban three was not an easy one,” the Conference of Presidents of Major American Jewish Organizations said in a statement. “We appreciate the efforts of President Obama and Vice President Biden in bringing this about.”

Gross is in ill health. He has lost more than 100 pounds since his incarceration and suffered from painful arthritis.

A senior administration official who spoke to reporters before Obama’s announcement said the Vatican played a key role in negotiating the deal, in part through Pope Francis’ pleas to Cuba to release Gross as a humanitarian gesture.

The official, however, also noted the significance of the Jewish holiday season of freedom.

“We believe that Alan was wrongfully imprisoned and overjoyed that Alan will be reunited with his family in this holiday season of Hanukkah,” the official said.