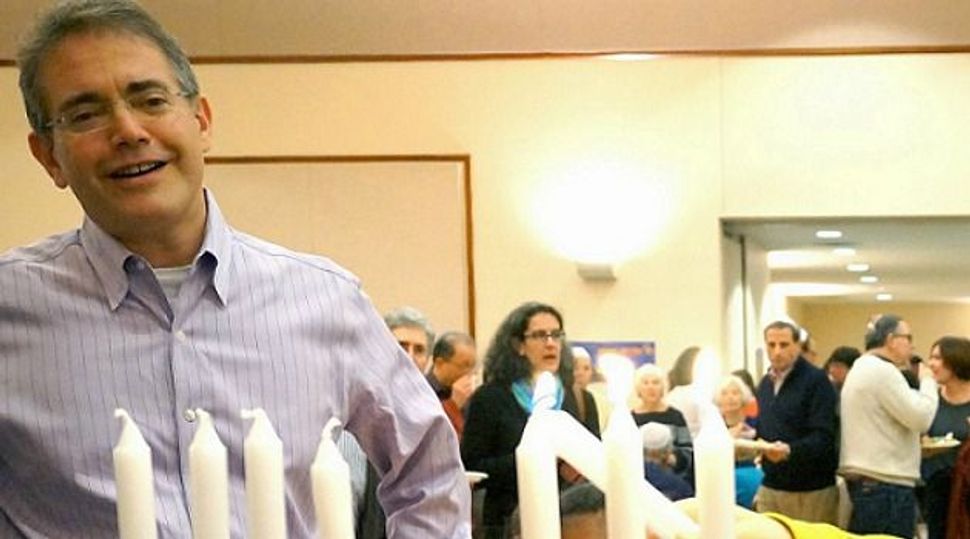 (JTA) — Within days of floating a proposal that woud have allowed Conservative rabbis to perform interfaith marriages, Rabbi Wesley Gardenswartz of Temple Emanuel in Newton, Mass., backed away from the controversial plan.

In a recent email, Gardenswartz asked congregants to consider a proposal for a new shul policy that would enable him to officiate at interfaith weddings in cases where the couple commits to a “Covenant to Raise Jewish Children.”

The shift would have made him the first prominent Conservative clergyman to break with the movement’s ironclad rule against rabbis performing intermarriages.

“Conservative clergy cannot officiate at or attend an interfaith wedding,” Gardenswartz wrote. “But I am worrying whether that response has grown stale, and whether a new response would better serve the needs of our families and of our congregation.”

The rabbi is also said to have sent his proposal to the Rabbinical Assembly, the rabbinic group that sets Conservative policies and standards.

But just days after Gardenswartz floated the idea, he abruptly backed down from its most controversial element: that he be permitted to perform interfaith weddings.

“The Covenant to Raise Jewish Children will not work,” Gardenswartz said in a subsequent email sent to congregants this week and shared with JTA. “In my initial proposal, I had written that I would perform an intermarriage if the interfaith couple would, by signing a written Covenant, affirm that, if God blessed them with children, they would raise their children exclusively as Jews. This idea received many negative reviews, especially from our interfaith families whom we were trying to reach by it.”

According to Gardenswartz, who has been at Temple Emanuel since 1997, congregants said such a covenant would be “asking too much, too soon.” They also said it did not account for those unable to have children or past child-bearing age, would be unfair to require only of interfaith couples, and would be unenforceable and therefore a mere formality.

“These objections persuaded me that the Covenant is not workable,” Gardenswartz wrote.

In the email, the rabbi also reassured congregants that he would not take renegade actions that would sever the congregation’s affiliation with the Conservative movement.

But Gardenswartz said the congregation would explore ways to be more welcoming to interfaith families both before and after the wedding and treat interfaith couples exactly the same as all-Jewish couples – with the exception of wedding officiation.

It’s not clear what role fear that he or his congregation would be ousted by the Conservative movement played in Gardenswartz’s change of heart. He declined JTA’s requests for an interview.

“There is a range of opinions with our congregation,” synagogue board member Joanne Linowes Alinsky told JTA. “Some people are thinking this is exciting, groundbreaking stuff, and others are thinking it is too far from tradition.”

Rabbi Julie Schonfeld, executive vice president of the Rabbinical Assembly, declined to discuss any details of her conversations with Gardenswartz. But she confirmed that R.A. rules mandate the expulsion of any member who violates the rule against officiating at intermarriages.

“What I see in our members is very consistent reaffirmation of this standard,” Schonfeld told JTA. “It’s not just that we won’t; we can’t. We don’t see the performance of intermarriage as something rabbis can do.”

She also noted that synagogues affiliated with the United Synagogue of Conservative Judaism cannot retain rabbis who perform such weddings.

The angst surrounding intermarriage and the mixed reactions from congregants to Gardenswartz’s proposal are a reflection of the struggles of a movement with declining numbers that frowns upon intermarriage but in which nearly four in 10 members marry outside the faith, according to the 2013 Pew Research Center’s survey of U.S. Jews.

“The reality of modern-day Judaism is that almost all of us are touched by this,” Lisa Hills, Temple Emanuel’s president, said of intermarriage. “If it’s not in our nuclear family, it’s somewhere in our extended family.”

The response within the movement generally has been to discourage interfaith unions yet welcome such couples once they are married. But many are worried that this approach alienates Conservative Jews and their non-Jewish partners, driving them away from Jewish tradition entirely or into the arms of alternative rabbis and movements that allow intermarriage, prompting them to abandon the Conservative movement.

“I think our movement in terms of colleagues is tremendously divided between doing what we’ve been told – by the R.A. 45 years ago in establishing standards of practice – and serving our members and creating Jewish families,” said Rabbi Charles Simon, who is executive director of the movement’s Federation of Jewish Men’s Clubs and helps Conservative synagogues be more inclusive of non-Jews.

Simon said the move by someone of Gardenswartz’s stature to review policy on interfaith unions could be a game changer for the movement.

“I think this is the beginning of a huge paradigm shift,” Simon said. “By writing a paper and sending it to the R.A., this changes the playing field.

“In terms of congregational rabbis, Wes is unique. I can’t think of anybody else who is out there in the same way. I’m very excited because this can potentially create tremendous opportunities in the movement for growth, for attracting families.”

For now, Gardenswartz’s redrawing of the proposal to his congregation precludes his officiating at interfaith weddings. But he has made clear that he will not frown upon interfaith unions.

“Temple Emanuel will treat an interfaith couple as a Jewish-Jewish couple except that its clergy cannot officiate at the interfaith wedding,” he wrote in his email this week.

In this regard, Gardenswartz is not alone in his movement. Other Conservative rabbis struggling with the movement’s ban on intermarriage have found their own ways of welcoming interfaith couples – and even blessing their unions.

At Temple Aliyah in Los Angeles, Rabbi Stewart Vogel celebrates interfaith couples, acknowledging them on “anniversary Shabbats” along with the Jewish couples.

And Conservative synagogues all over the country are adapting rituals, loosening restrictions that had kept non-Jews from being full-fledged members and trying new outreach approaches in an effort to make non-Jewish family members feel part of the synagogue community.

Hills says crossing the Rubicon by sanctioning intermarriages feels like the next logical step for the Conservative movement.

“We welcome interfaith families as members in our Conservative synagogues,” she said. “We should be welcoming at the point of weddings as well.”

For now, however, that’s off the table for Gardenswartz. But it remains a subject of deep debate within Temple Emanuel, where many members are seeing their children pair off with non-Jewish spouses and leave the fold.

“It’s huge in our community as our children are getting married,” board member Alinsky said.

“Do you welcome an interfaith couple before the wedding or wait until they are married by somebody else and then say now that you are married we want you to come into our faith and our synagogue? The question is: Do you dilute what’s important about Conservative Judaism or do you move with the trends? There’s no easy answer to that.”