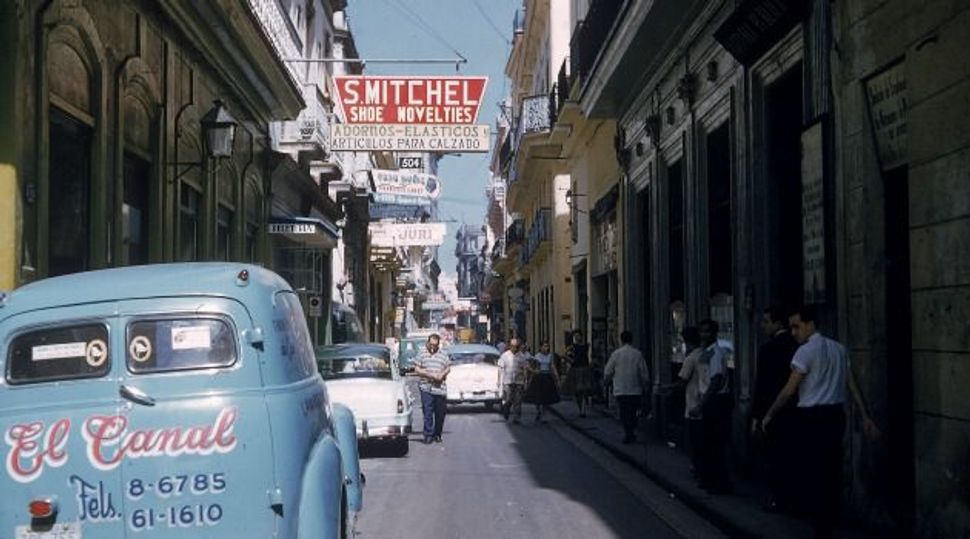 Cars are parked along a narrow street as pedestrians walk in downtown Havana in the 1950s. Image by getty images

On December 17, President Obama announced a thaw in U.S.-Cuba relations and the release of Alan Gross, an American-Jewish contractor who had been held in a Cuban jail for five years.

Here’s what a few Cuban-American Jews make of the announcement, both for themselves and for Cuban Jews in general. 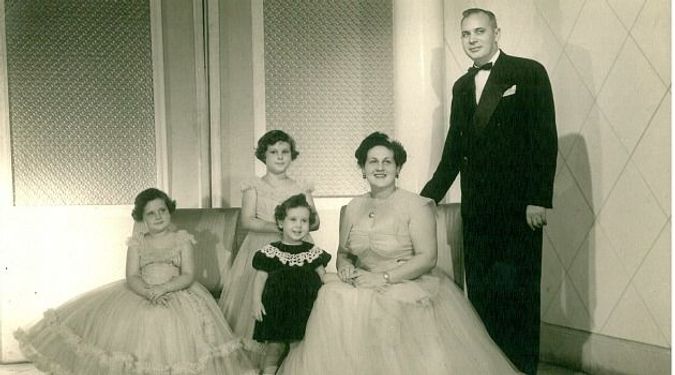 Rosa Perlmutter, left, emigrated from Cuba at age 13. Even though she has never returned to the island, she writes frequently about the community that once thrived there.

What took place is encouraging. It’s great to see Mr. Gross finally out of jail and back in the U.S., and I’m happy to know that there will once again be an American Embassy in Cuba, with the possibilities that this implies. I know it won’t be easy in the current political climate to get Congress to eliminate the embargo, but at least they’re discussing it, and the president seems ready to take things as far as his powers allow.

I left Cuba as an adolescent, at age 13, and for many years felt vividly the sting of the revolution’s effect on my parents’ and my extended family’s lives. My father owned a small clothing store that he scraped together by dint of hard work since he started sweeping floors there upon his arrival on the island at age 17 from his native town of Kortilesy in Poland. When his store was “intervened,” or taken over by the government, in 1962, my parents left the island and had to start over again in Boston, where my father found himself sweeping floors again, this time at age 52 and in Filene’s Basement. As time passed, the family found many rewards in living in the United States as Cuban Jews, and made Boston and then Miami its home.

For myself, I’ve never gone back to the island. At first it was out of respect for my parents’ decision to leave and because of my own disagreement with the government and its practices. I haven’t changed my mind about the latter — though as the revolution has evolved, so has my thinking — but for a couple of years now I have toyed with the idea of return (I’m an American now, so it would just be temporary). In point of fact I “return” to Cuba often through my writing and research. I am a college professor and teach several courses on Cuban literature and culture, have been writing a book about the Jewish community of Cuba from 1920 to 1960, and have directed several dissertations on Cuban writers.

Through my readings I know of the struggles of the people of Cuba, and especially of the now-few members of the Jewish community, and welcome any measures that will make their daily lives easier. The embargo has not garnered the results that the U.S. hoped for 50 years ago. It’s time to face it and let it go.

Doing so will not mean that we sanction everything negative that the Cuban government has done since it took power; it would in fact make it easier to stop them from blaming the embargo for everything that goes wrong on the island. 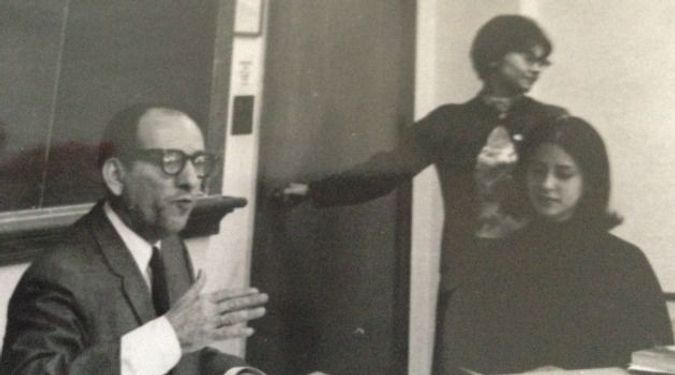 Leon Perez’s father, David, lectures at the Albert Einstein School in Havana that he founded before the revolution led much of the Jewish community to emigrate.

My father, David Perez, was the founder and principal of Havana’s main Jewish school, the Albert Einstein in Havana. Most people in the Havana Jewish community went to his school. At its height there were probably 300 students from kindergarten through high school. That all ended because of the revolution.

My aunt passed away one month ago. She was born in Cuba, but she lived in Miami. When I went to Florida for the funeral, someone asked me if I wanted to check inside the coffin to make sure we had the right person. I said no, I wanted to remember her the way I saw her all my life. I’ve been asked many times to go to Cuba to see things the way they are now. I left in 1961. I was 15 years old at that time, and I have great memories. I don’t want to go now and see how they have destroyed Cuba during the past 50 years.

Whatever they say on TV, you cannot erase 50 years in one day. Alan Gross landed in the United States, but that’s not going to make Cuba better. Maybe more tourists will visit and that will provide more jobs for people in service industries. But if you are looking for freedom the way it’s supposed to be, it’s not going to happen. 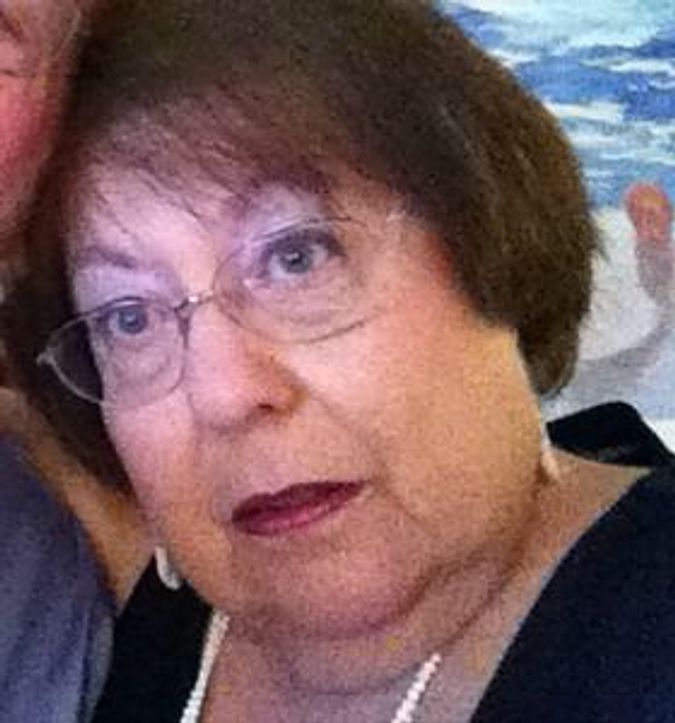 I was born in Havana in 1948. My parents came to Cuba from Eastern Europe in the 1920s to get away from the pogroms and in search of a better life. Because of the immigration quotas, they could not come to the U.S., and they ended up in Cuba, where they thrived.

When Castro came to power my parents sent me and my brother to the United States and they stayed behind so that my father could continue the job of getting as many Jews out of Cuba as he could. He worked in conjunction with HIAS, an organization whose job was to rescue Jews around the world. A year later I was reunited with my parents.

For at least 50 years I resented the actions of the Cuban government that forced my family to abandon their home, business and worldly possessions to begin a new life in a country whose language I did not speak and kept me separated from my family. I swore that I would never return to Cuba so long as there was a Castro in power. The last three years I came to realize that I was depriving myself of enjoying the country of my birth, that the people in Cuba are not at fault, that people are not responsible for the actions of their government.

In May of this year I had the opportunity to visit Cuba. The people are just as warm and friendly as I remembered them. I was able to talk to the people in the streets, and realized that we all want the same thing. They hold no animosity towards the people of the United States. They feel that it is the governmentS of both countries that have kept us apart.

I was honored to exchange thoughts with some economists, and they explained what they envision the future of Cuba will be. They agreed that changes are imminent, that it might be slow, and mistakes will be made and they hope to learn from them.

Another thing that I was able to do is visit the house that I grew up in. We hired a driver to take us there, and I took the liberty of knocking on the door. A man answered and I explained that I lived in that house 54 years ago and would like to see it again. He welcomed me and told me to come in and walk through it. I am an American citizen and have been for many years. My allegiance is to this country. But Cuba is part of who I am. I love the music, the food and the people.

I am thrilled that finally Alan Gross has been reunited with his family. I know the feeling of not knowing if you will ever see your family again, because that is how I felt when I was separated from my parents. 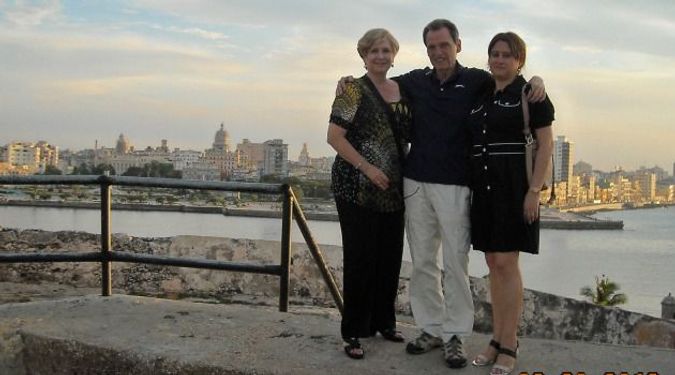 As someone born in Cuba to immigrant Jews who fled World War II, seeing my parents have to again “pick up and leave” the country that gave them refuge but then rejected them was a shocking event.

I arrived in the U.S. at 16 and spent many years being resentful for what had happened. As I grew up in America, became a citizen, graduated college, worked for IBM, built my own business and retired, I realized that the experience of overcoming all the adversities of being a “stranger in a strange land” made me the person that I became — a proud American Jew.

It made me change my mind about what happened in Cuba. It made me ask: “What happened to other Jews that did not leave? What was their fate?” In 2008 I had to go back and find out. What I found confirmed that I was the lucky one. I decided to do something to help. In 2012 I started to travel to Cuba and bring groups for cultural exchanges with the community.

After the Alan Gross incident, I realized that it could have happened to me. In fact, once I was detained at the airport on my way out for not taking with me a computer that I had brought in, but [leaving it] with one of the synagogues for their use. I was just fined and had to pay for the importing of it, so they took my dollars and let me go. Needless to say that after Mr. Gross was arrested, I was most careful.

I know that much was done by the Jewish community in the U.S. on his behalf. In fact, during one of the trips, my brother James, an attorney, was able, with Rabbi Eli Abadie of the Edmond J. Safra Congregation, in New York, to meet with Mr. Gross and ensure his well-being.

Seeing Alan Gross come back after five years gives me hope that Jews will once again be able to not only visit, but establish themselves in, Cuba, just like my parents once did. Rebuilding a prosperous Jewish community in Cuba is our aim.

Cuban people and Cuban Jews in particular have suffered much over the last 50 years. A combination of the Cuban government and American policy toward each other has created a Third World country out of what once was one of the most advanced Latin American countries. Jews once prospered there, and I know that this can happen again. The steps announced are the beginning of a journey back to what once was. I intend to participate in that journey.