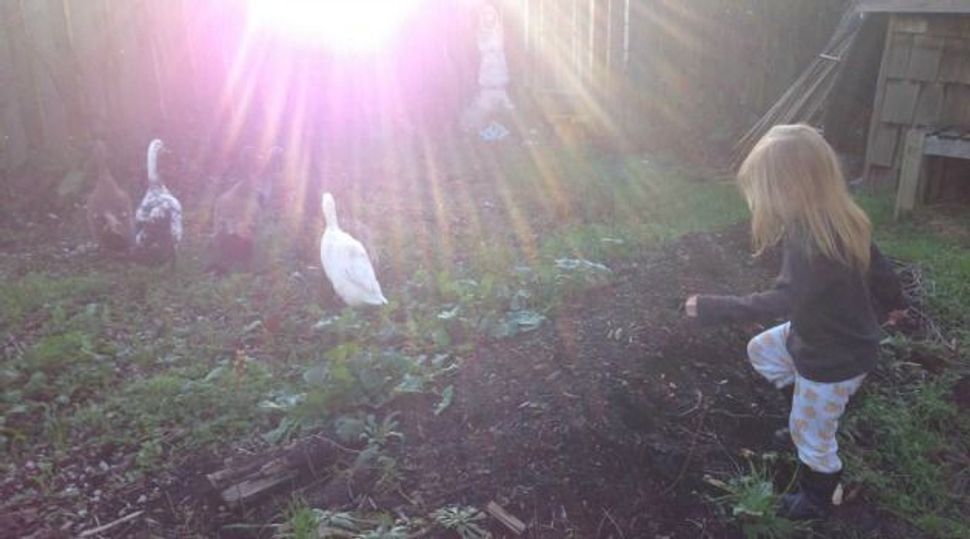 (JTA) — Even on a cold, gray and rainy morning, the children from the Gan Shalom Collaborative School are outside, seated under a wood-framed shelter topped by corrugated plastic.

With their teacher, Sarabel Eisenfeld, they grate potatoes for latkes, then cup their hands beside their heads to put on their “Shema ears for deep listening” before turning their attention to the world around them.

“I hear a crow!” Forrest says.

“I hear some birds singing,” Pfeifer chimes in.

Next they turn their attention to the weather.

“It’s a cold day. That’s why we have our jackets on,” Marlen says.

Founded by Eisenfeld and director Katherine Morse-Woods as an “earth-based” preschool, Gan Shalom was created to put its students in touch with the patterns of nature — and in so doing, with the rhythm of the Jewish year.

Students spend most of their time outdoors, where they gather for story time on stumps, bake challah or apples in a wood-burning oven and tend a vegetable garden alongside more standard preschool fare.

Gan Shalom has just three students, though enrollment may get a boost next year when parents become eligible for a $2,000 tuition voucher from the Portland Jewish Federation for first-time Jewish preschoolers.

It represent a small, experimental take on the possibilities of a Jewish education at a time when schools, Jewish and not, are increasingly integrating gardening, and outdoors education more generally, into their curricula.

“I think that it has become a much larger issue in the secular world, and Jewish early childhood educators have said this is a natural fit for us,” said Lyndall Miller, program director of the New York-based Jewish Early Childhood Education Leadership Institute. “Judaism is a very sensory, spiritual kind of adventure. Few things are more sensory than being in a garden.”

Eisenfeld and Morse-Woods are not your garden-variety Jewish educators. Both reside in intentional communities — residential collectives typically organized around some shared cause or spiritual orientation. Gan Shalom is housed at Beit Shlomo, the community created by Morse-Woods and her husband in their Victorian duplex in southeast Portland shared with two other Jewish families. The couple are also working to develop an acre and a half of forest land outside Seattle into a spiritual retreat center complete with a mikvah.

In January, the school will move two miles away to Foster Village, the community where Eisenfeld lives with 10 others. Created by combining two housing lots, Foster Village features an elaborate permaculture garden with ducks, chickens, a beehive and a sophisticated composting system.

“We can deepen our reverence and connection with creation when we’re part of it and comfortable with it,” Eisenfeld told JTA. “When we grow this food and we say a blessing for this food, you feel it more.”

In many nursery schools, this takes the form of comparatively modest vegetable gardens. Gan Shalom’s more adventurous embrace of gardening and the outdoors is of a piece with Portland, where the pursuit of local food, urban agriculture and low-impact living has become the stuff of parody.

It’s even more true on the city’s more alternative and experimental east side, where Gan Shalom has become the first Jewish preschool. A second east side Jewish preschool, Tree of Life Montessori, will open in January. Its founder, Ariel Cohn, is the mother of a current Gan Shalom student.

“People are not super religious,” Woods-Morse said of southeast Portland. “We are trying to strike that balance where we create rituals for the kids, weaving things into their daily lives without being really didactic.”

After the relocation, Eisenfeld hopes to further push the boundaries of Gan Shalom’s mission by having children spend virtually their entire day outside. There is a porch where they can go when it rains and a small cabin, currently a guest bedroom, that can function as a warming shed on cold days. The kids can cook outside using a concrete wood-burning oven — decorated with a molded concrete octopus — or a portable stove. They can even relieve themselves outside in compost toilets.

Eisenfeld’s approach to teaching has been shaped by her own experiences as a trip leader for the American Jewish World Service and her work at The Farm School, an educational farm in Athol, Mass.

She recalls her first Rosh Hashanah at the educational farm.

“I was picking apples and I was harvesting honey from the bees, and I never felt more Jewish,” Eisenfeld said. “Our holidays are really based on the seasons, and that was my first experience of that.”

Gan Shalom’s plans for the future are modest, expanding from two days a week to three, though the school day will still be restricted to four hours a day, in part for regulatory reasons. The school is hoping to bring in other families; Cohn’s child will leave in January to attend Tree of Life.

Meanwhile, the transition is underway. At Beit Shlomo, the bamboo structure for growing green beans is being taken apart. At a Hanukkah party at Foster Village, the children chase the ducks and light the candles. As the sun sets, Pfeifer is reluctant to leave, but his mother reassures him.