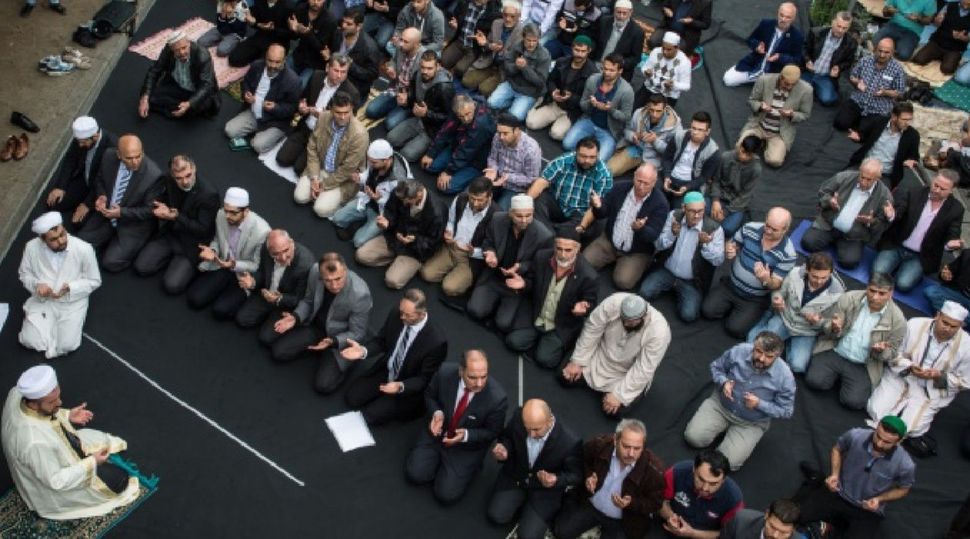 Living in Berlin: Muslims take part in a traditional Friday Prayer as part of a nationwide event in Germany called, ‘Muslims Against Hatred and Injustice.’ Image by Getty Images

Right-wing extremism is not the only kind of extremism Germany faces. An estimated 300 German citizens of Muslim background are currently fighting in Syria as part of the radical-militant organization Islamic State. The number of Muslim Germans who adopt extremist ideology is tiny in comparison with the portion of right-wing extremists in the German society. But the problem of radicalization among Germany’s 4 million Muslims is growing.

There has been a steep rise of people from Western European countries who have traveled abroad to fight for jihad, according to the International Center for the Study of Radicalization and Political Violence, at King’s College London. There is a very real threat of these foreign fighters using their Western passports to return to their native country and commit attacks or recruit for terrorist organizations.

One of the responses by the German authorities is Hayat, a de-radicalization program focused on Muslim extremists. Funded by Germany’s Federal Office for Migration and Refugees, the goal of Hayat — which means “life” in Arabic — is to prevent radicalized Muslim individuals from becoming foreign fighters. Hayat counters the work of global jihadi networks that skillfully use social media to distribute propaganda and recruit new members. Its aims are to convince radicalized Muslims in Germany to voluntarily refrain from traveling abroad and to encourage those who have already left for Syria to return and reintegrate into the society.

Founded in 2012, Hayat has seen a massive increase in the number of cases — 21 in the first year, 53 in 2013, and now 120. It has so far successfully de-radicalized 30 individuals, according to Hayat counselor Julia Berczyk. Its methods are based on the knowledge gathered in Exit-Deutschland’s work with neo-Nazis.

“The work on Islamic extremism was integrated into structures and projects countering right-wing extremism, which have already existed in the Federal Republic for decades,” Berczyk said. “Transferring this unique knowledge into the realm of Islamic extremism, Hayat is now available to parents, siblings, friends, teachers, employers and anyone else who has a relationship to a person potentially on the path of a violent radicalization.”

Unlike Exit-Deutschland, which deals directly with individuals who want to de-radicalize, Hayat’s counselors are mostly in touch with family members and friends of the radicalized individuals, as those on the path of radicalization tend to be uncooperative or have already left Germany. The first step in Hayat’s process is to conduct an analysis and risk assessment of the respective situation to determine whether the individual is in danger of becoming violent or whether it’s a harmless case of increasing religiosity. Berczyk explained that the counselors maintain the confidentiality of people they advise, unless they learn of a planned terrorist attack or a trip to or from Syria.

“In these particular cases, we encourage the families to inform authorities themselves for their own best interest, while we take the role of a mediator between families and authorities,” Berczyk said.

German authorities’ extensive efforts to counter radicalization is a lesson from the past, Berczyk said: “Due to Germany’s history, it has been always considered a special task, by authorities and the public alike, to take a firm stance and reject any form of political extremism.”