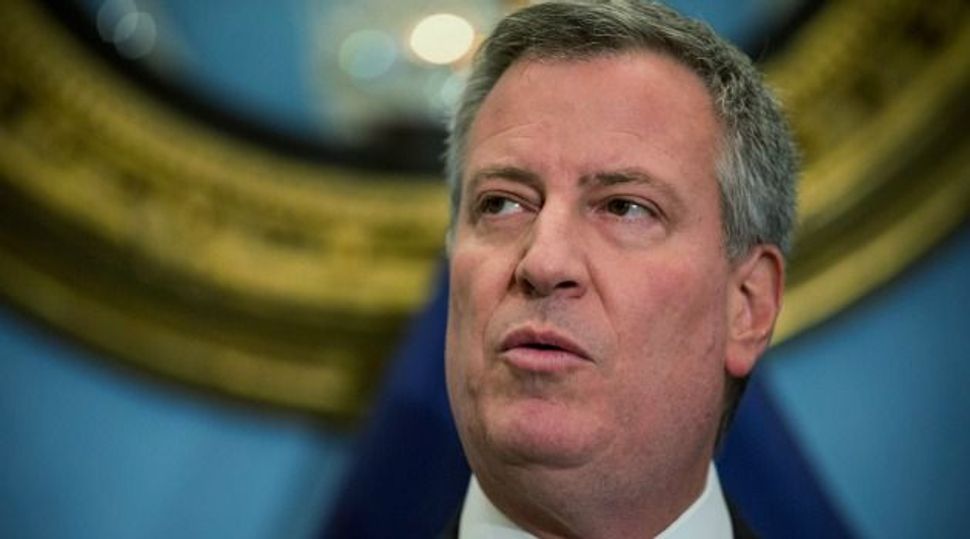 Mayor Do-Little As a candidate, Bill de Blasio promised a better policy on ‘Day 1’ to protect infants who undergo a controversial circumcision rite. After a year in office, there is no sign of any change — and the number of sick infants is rising. Image by getty images

When Bill de Blasio was running for New York City mayor in May 2013, he said that he would “come in day one to City Hall with a new policy” to protect babies from contracting herpes during a controversial circumcision rite while respecting “religious tradition.”

Last January, during his first month in office, Mayor de Blasio said the policy he inherited from his predecessor, Michael Bloomberg, which required mohels to obtain written consent from parents before performing the rite, would remain in place until a more effective solution could be found.

The year that followed — 2014 — was the worst since 2006, when the city’s health department began tracking suspected cases of infant herpes linked to the circumcision rite, known as metzitzah b’peh, or MBP.

The city records an average of one case of infant herpes linked to MBP per year. At most, it has recorded two cases in one year.

The Forward asked the mayor’s press office on January 5 what, if anything, the mayor has done or is doing to address the problem. By press time, on January 7, the office had not responded to repeated calls and emails for comment.

Current and former members of New York City’s Board of Health did not respond to requests for an interview or declined to comment.

A spokeswoman for New York City’s health department said that the health commissioner, Mary Bassett, was not available for interview.

The health department believes that mohels who practice MBP can transmit oral herpes, a common virus that manifests itself as cold sores. According to a 2004 study, about 75% of adults in New York City carry the virus.

Although oral herpes does not pose a health risk to adults, it can be dangerous for infants. Between 2000 and 2011, New York City identified 11 cases of infant herpes that it believed were caused by infected mohels performing MBP. Two of those babies died, and two suffered brain damage.

New York City has tried for almost a decade to balance its commitment to public health with the Orthodox community’s freedom to practice a religious rite that some rabbis see as an integral part of the circumcision ritual.

After the death of the second baby, in 2011, the city’s board of health drew up a regulation requiring mohels to ask parents to read and sign a form warning that MBP exposes their child to the risk of herpes, which can cause “brain damage or death.”

Since the city began enforcing the regulation, in January 2013, the health department has identified five cases in which it believes babies have caught herpes as a result of MBP.

But many ultra-Orthodox mohels continue to deny that herpes can be transmitted during MBP, and many refuse to comply with the consent form rule.

At the recent annual conference of the American Board of Ritual Circumcision, Rabbi Avrohom Cohn said the link between MBP and herpes was “a malicious, vicious fabrication to try to attack Judaism.”

In an interview broadcast from the conference December 31, Cohn told the radio show “Talkline With Zev Brenner” that there is no link between MBP and infection and that MBP is safe. “Our regulations are much stricter than the health department and the medical profession,” he said.

Dr. Aaron Glatt, a Modern Orthodox rabbi and infectious disease specialist, told the Forward that although there is a “theoretical risk” that herpes can be transmitted via MBP, it has never been “conclusively proven.” Glatt said that until doctors can prove a conclusive link, parents should defer to their rabbi for guidance on whether MBP should be performed.

However, leading medical groups, including the Infectious Diseases Society of America, of which Glatt is a member, say that the link between MBP and infant herpes is incontrovertible. They point to several studies in the past 10 years, including an epidemiological study conducted by New York City’s health department that concluded that infants who undergo MBP are three times more likely to contract oral herpes than those who do not undergo MBP.

Doug Diekema, director of education for the Treuman Katz Center for Pediatric Bioethics at Seattle Children’s Hospital, said, “Parents need to recognize that those who don’t believe in the risks are just wrong.”

But Diekema added that it would also be wrong to draw any conclusions from the four cases of infant herpes tied to MBP in New York City in 2014. “All it takes is a couple of Jewish mohels with active [herpes] circumcising a number of babies, and you suddenly have what appears to be an outbreak,” he said.

The city’s health department has been hamstrung in its investigation of infant herpes infections by Orthodox parents who refuse to divulge the name of the mohel who circumcised their infected child.

A health department spokesman said that the city has identified mohels in only two of the four cases last year. Both of those mohels were banned from practicing MBP. The city will not release their names.

In 2013, a federal judge denied a request by a coalition of ultra-Orthodox groups and mohels for a preliminary injunction against the regulation.

But the case was sent back to the federal court in August 2014, after an appeals court ruled that the regulation must be reviewed under the highest level of legal scrutiny because it targets a religious practice.

That case is expected to be heard this year.

Even if the city wins the case, and the consent form regulation stands, if the past year is anything to go by, the existence of a consent form will do little to prevent the continued infection of infants following MBP.

“One of the points that has really troubled me throughout all of this is, whether there is one case or four or 12, they are all, by definition preventable,” said Jonathan Zenilman, chief of the infectious diseases division at Johns Hopkins University. “This is an infection which has the potential to do really bad things.”