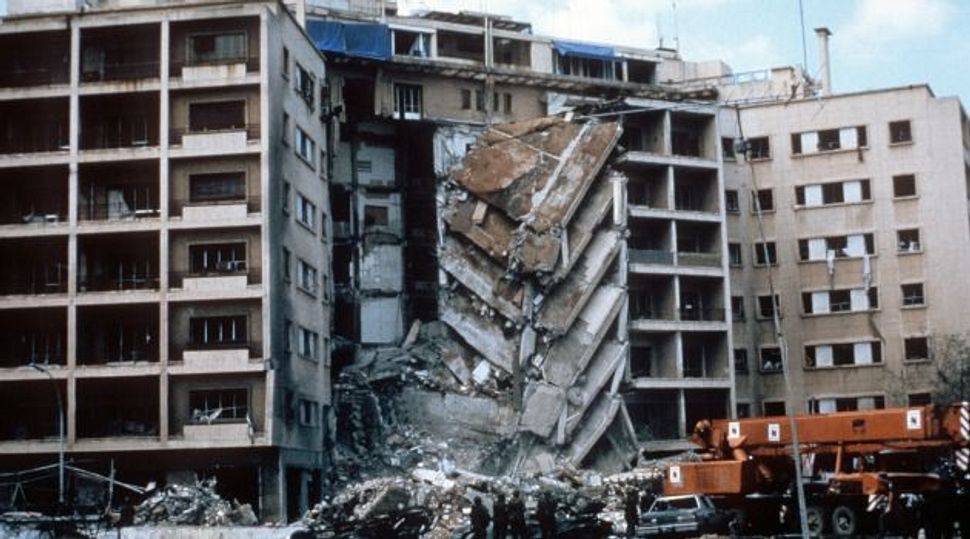 Terror Attack: Kenneth Welch was killed in the 1984 Iran-backed bombing of a U.S. embassy building in Beirut. Image by wikipedia

Thirty years after U.S. serviceman Kenneth Welch was killed in a Beirut suicide bombing by a terrorist group believed to be linked to Iran, a multimillion-dollar payout from seized Iranian assets seemed finally in sight.

Welch’s brother, Michael Welch, wanted to thank the man he credited with this success: Michael Engelberg.

Engelberg’s work was not limited to Kenneth Welch: The American Center for Civil Justice, which Engelberg co-founded, has helped more than 100 claimants seeking millions of dollars in compensation from so-called “state sponsors of terrorism,” like Libya and Iran. The claimants have included injured victims and the relatives of dozens killed in terror attacks across the Middle East. 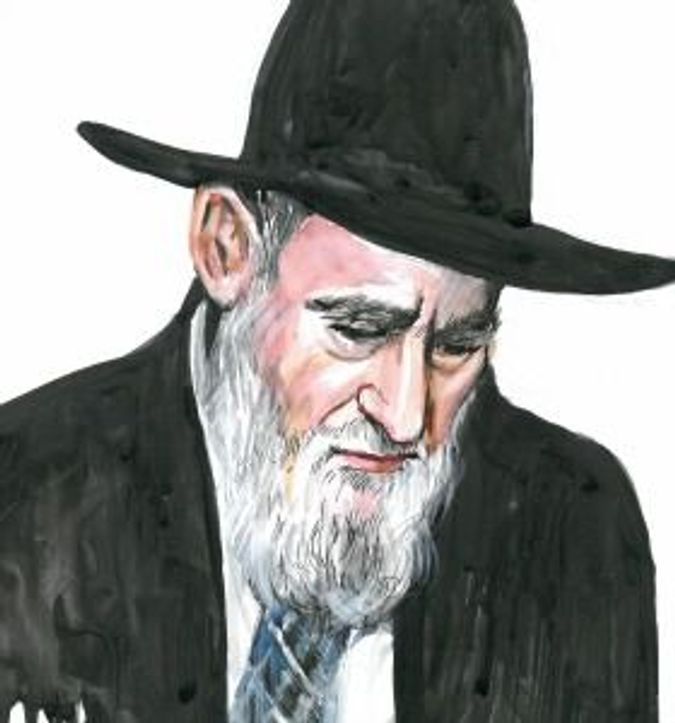 But each time Welch tried to reach Engelberg at ACCJ, an official there told him that Engelberg was too busy or too sick to talk.

Engelberg was indeed ill. He had been fighting cancer since 2011. But when Welch finally called Engelberg at his home, in July 2014, he was amazed to find an energetic voice on the other end of the line.

Welch was puzzled. He told Engelberg that he had recently received a letter from ACCJ, urgently asking him to sign a new power of attorney agreement that would help in the anticipated collection of Iranian assets that had been identified in Canada.

Welch said he had tried to contact Engelberg to ask him about the new agreement, but an ACCJ representative, Jedidiah Perr, had told him that Engelberg was too sick to deal with the matter. Welch had already signed and returned the document.

Engelberg told Welch that he had been tricked. The new agreement cut Engelberg out of the collection efforts and increased the fees Welch would have to pay to ACCJ, Engelberg said. 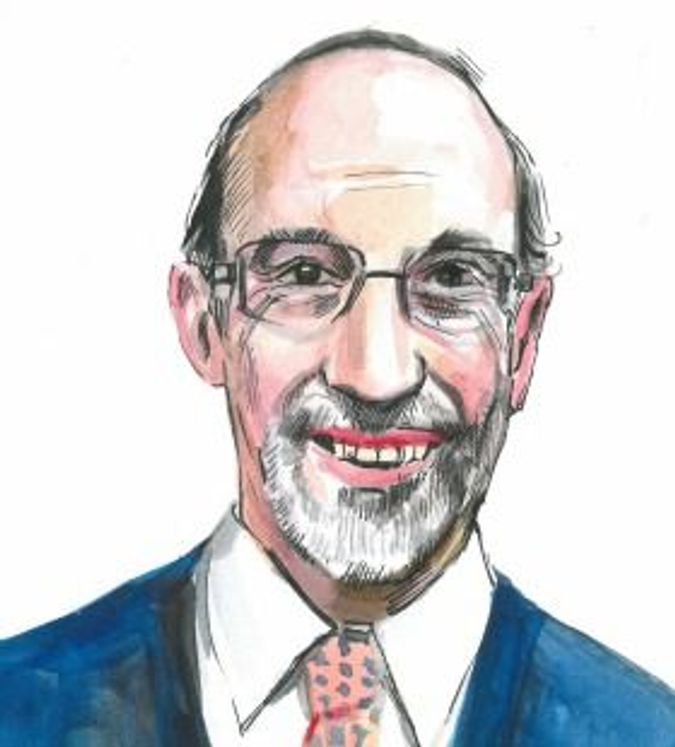 Many other victim families received similar agreements from ACCJ in 2014.

According to a lawsuit filed by Engelberg on December 29, 2014, the letters were part of “a blatant abuse of control and authority” perpetrated by Perr and his father, Eliezer Perr, an Orthodox rabbi from Lakewood, New Jersey.

The suit, filed in Nassau County Supreme Court, accuses the Perrs of channeling from ACCJ an estimated $20 million to other groups the Perrs controlled. The suit also accuses the Perrs of lying to the IRS and of using ACCJ as “their own personal piggy bank” to distribute more than $800,000 to Orthodox yeshivas.

The Perrs’ lawyer, Kevin Maclay, did not provide a response to the claims, despite multiple requests from the Forward.

After Welch put down the phone to Engelberg, he composed an email to Jedidiah Perr, accusing him of creating “confusion and deception.”

“I cannot even find the proper words of HOW much you Harmed me,” Welch wrote in the July 2014 email. “The reason for this email is to tell you to stop trying to bully, lie and deceive me and other families of Terrorism.” [all caps sic]

Those families included victims of the 1983 Marine barracks bombing in Beirut; the 1984 bombing of the U.S. Embassy annex in Beirut, in which Kenneth Welch was killed; the 1996 bombing of the Khobar Towers in Saudi Arabia, and the 1997 bombing of Ben Yehuda Street in Jerusalem.

Behind this dispute lies the tale of a rabbi and his student.

Engelberg went on to become a wealthy pediatrician. But during the 1990s, Perr told Engelberg about congressional legislation that could allow victims of terrorism to sue states.

Engelberg decided to launch a group that would help terrorism victims. One of his first cases was Stephen Flatow, a New Jersey lawyer whose 20-year-old daughter, Alisa Flatow, was killed in 1995 in an Islamic Jihad suicide bomb attack in Israel. Engelberg helped Flatow find an attorney, and he advocated several times on Flatow’s behalf in Washington.

In 1996, Congress passed the Flatow Amendment to the Foreign Sovereign Immunities Act, which allowed victims of terrorist groups to seek punitive damages against states believed to have funded those groups. 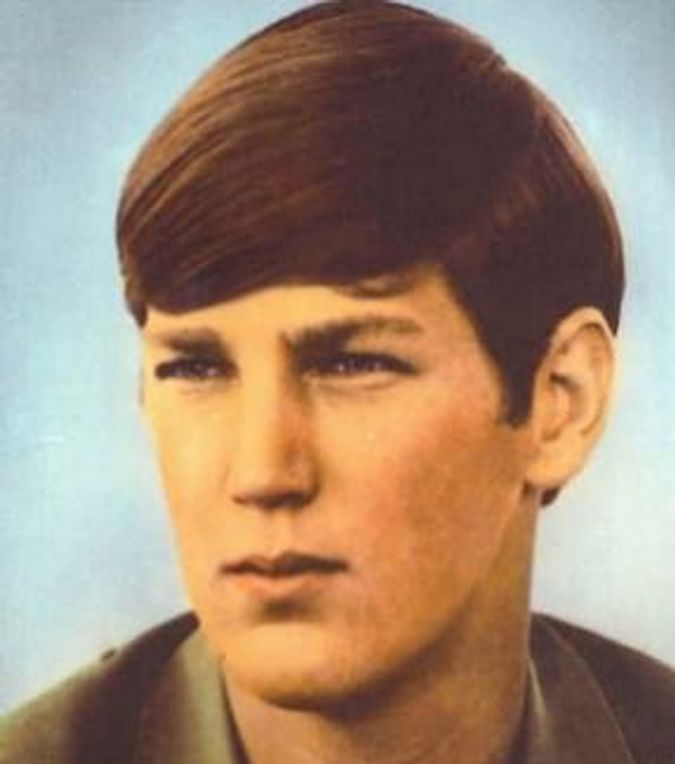 But it would take time, money and expertise not just to sue those states, but also to seize their assets. So Engelberg formed a not-for-profit organization, The Raoul Wallenberg Center for Civil Justice. The idea was for the center to advance funds and retain lawyers on behalf of victims and their families. If claimants were successful, they would reimburse the center for its costs plus a percentage of net proceeds, up to a total maximum of 20% of the payout.

Engelberg and his teacher, Eliezer Perr, were two of the three founding directors of the center, which was renamed the American Center for Civil Justice in 1999.

In the years that followed, ACCJ’s clients won a series of victories against Libya and Iran, with damages running into the tens of millions of dollars in each case.

Kenneth Welch’s family won their lawsuit against Iran in 2007. The Welch family was awarded a total of $32.7 million, including $2.5 million in compensatory damages for Michael Welch.

That settlement paled in comparison with two judgments that ACCJ claimants secured against Iran for the Khobar Towers bombing. In 2006 and in 2009, 67 claimants were awarded almost $600 million in compensatory and punitive damages for the bombing that killed 19 U.S. personnel and injured hundreds.

For the longest time, it had seemed unlikely that claimants would ever be able to recover such sums.

Then, in 2008, the United States and Libya signed an agreement in which Libya made available $1.5 billion to settle pending claims brought by terrorism victims. The following year, ACCJ families with claims against Libya, received tens of millions of dollars in wrongful death and personal injury claims. The total owed to ACCJ was almost $10 million.

Around the same time, prospects started to look up for families with claims against Iran. In 2008 and 2009, the U.S. Justice Department filed lawsuits against the owners of a skyscraper on Fifth Avenue in Manhattan that the federal government believed was a front for the Iranian government. The United States won the case in 2013, and the building was seized. The sale of the skyscraper is expected to generate hundreds of millions of dollars for terrorism victims.

The first inkling Engelberg had that something was seriously wrong at ACCJ came in September 2012. During a deposition in an unrelated ACCJ dispute, Engelberg learned that $2 million of the Libyan settlement funds meant for ACCJ had been “diverted” to a not-for-profit established by Eliezer Perr’s son, Jedidiah.

Jedidiah Perr, who represented himself as an ACCJ official, had given his own New Jersey-based group a name very similar to ACCJ’s: the American Center for Civil Justice, Religious Liberty and Tolerance.

The following month, Engelberg discovered that Jedidiah Perr had also set up a for-profit consulting firm, the American Recovery Center, which consulted for a group of creditors seeking access to Iranian assets in London.

Engelberg’s lawsuit claims that Perr only had access to those creditors because of Perr’s role at ACCJ. Perr, according to Engelberg, “misrepresented” to potential clients that ARC was “related to and/or a subsidiary of ACCJ.”

Engelberg’s suit claims that those creditors ought to have hired ACCJ as a consultant. He estimates ACCJ’s potential losses from this diversion at “a minimum of $18 million” and charges that Perr “unjustly enriched himself at the Center’s expense.”

During the waning months of 2012, Engelberg peppered the Perrs and ACCJ’s lawyers with questions and requests for information. Finally, in January 2013, the Perrs forced Engelberg out as ACCJ’s executive director.

Engelberg, who remained a board member until he was forced out this past September, hired his own attorney in response and began looking more deeply into the organization he had co-founded.

Amid paperwork that ACCJ had prepared for the IRS, Engelberg found a document purporting to explain the group’s payment of $2 million in Libyan funds to Jedidiah Perr’s not-for-profit: The transfer, the ACCJ document claimed, was the result of an agreement ratified at a 2007 ACCJ board meeting. That meeting, including its minutes and an agreement that ACCJ later produced as evidence, is a “fabrication,” Engelberg’s lawsuit says.

The suit also questions grants that ACCJ made to ultra-Orthodox yeshivas between 2009 and 2012.

Engelberg’s suit states that ACCJ’s revenue was supposed to help victims of terrorism and fund the center’s litigation efforts.

But the Perrs’ donations included a $200,000 grant to Beth Medrash Govoha, in Lakewood, New Jersey, which the Perrs both attended, and $250,000 to the National Society of Hebrew Day Schools, which supports yeshivas across the country.

The Perrs also gave tens of thousands of dollars to religious schools in Brooklyn and Queens attended by Eliezer Perr’s grandchildren and $50,000 to Yeshiva of Far Rockaway, which is run by Eliezer Perr’s brother, Yechiel Perr.

During the spring of 2014, as payouts from Iranian assets looked increasingly likely, ACCJ sent out new power-of-attorney agreements to clients. The accompanying letters informed claimants that the new agreement would update and streamline this process. But Engelberg says the agreement “obscured” its true purpose, which was to increase ACCJ’s fees by several percentage points or to divert funds to other entities controlled by the Perrs.

One claimant, Rich Brewer, a Marine who was injured in the U.S. Embassy annex bombing in Beirut, received an agreement letter for “the American Center for Civil Justice Inc., a corporation incorporated in the State of New Jersey.”

Brewer was confused. He knew that the ACCJ he initially signed up with was based in New York. He contacted Engelberg to find out what was going on. In a June 2014 email to Engelberg, Brewer wrote: “All this needs to come to an end and soon. We as claimants have put a great deal of trust in the Center and at the 11th hour to have this kind of nonsense flying around is very upsetting to us all.”