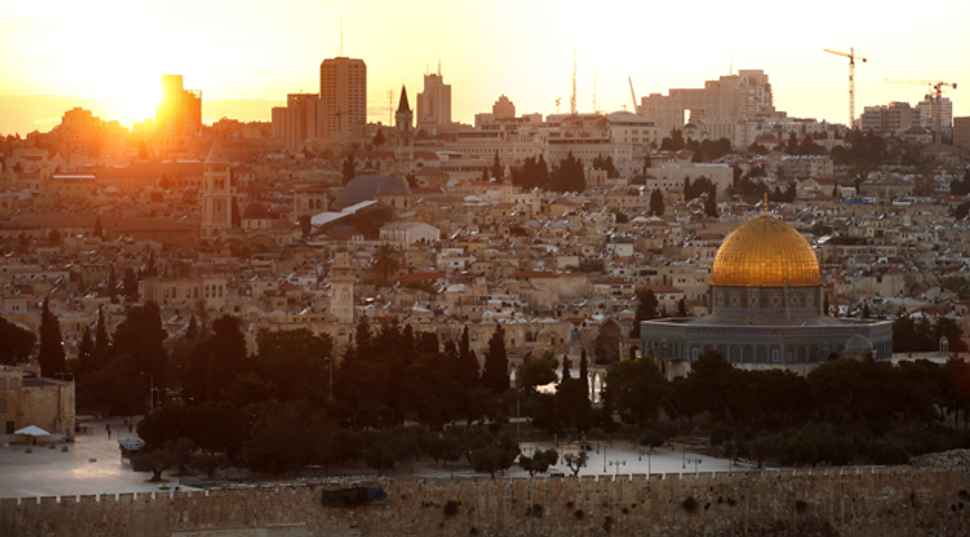 With the start of the new, Republican-led Congress, the issue of Jerusalem will be converging on President Obama from two separate directions now, even as a viable peace process to address the Israeli-Palestinian conflict appears more distant than ever.

The Jerusalem Embassy and Recognition Act of 2015, introduced in early January by Republican senators Ted Cruz of Texas and Dean Heller of Nevada, seeks to deprive Obama of the discretion he and earlier presidents have enjoyed to kick the unresolved matter of Jerusalem’s status down the road. The bill, and companion legislation in the House, would force the administration to recognize Jerusalem as Israel’s capital and relocate the U.S. Embassy there, in defiance of world consensus.

The bill’s introduction comes as the administration braces for a Supreme Court decision on a long-fought case that could also compel it to acknowledge Jerusalem as part of Israel. This would break with the U.S. stance under the 1993 Oslo Peace Accords, signed by Israel, the Palestinian Authority, the United States and the Soviet Union, which calls for the city’s final status to be addressed through negotiation.

For many American Jews and supporters of Israel, the idea of Jerusalem as Israel’s capital may seem like a no-brainer. After conquering the eastern sector of the divided city in the 1967 Six Day War, Israel quickly annexed the newly acquired bundle of Palestinian precincts and declared the city to now be unified as its “eternal capital.” But no country other than Israel itself has ever recognized this annexation.

Congress, where pro-Israel sentiments run strong and are unconstrained by the executive branch’s diplomatic considerations, has long bridled against this American nonrecognition. In 1995, the lawmakers passed a bill requiring the administration to formally recognize Jerusalem as Israel’s capital and to relocate the U.S. Embassy there. The legislation, however, was never implemented.

Using a waiver clause included in the statute at the Clinton administration’s insistence, every president occupying the White House since the bill’s passage — Clinton, George W. Bush and Barack Obama — made a point of sending Congress a letter every six months deferring implementation of the law due to national security considerations.

The new Senate bill and its companion House legislation, sponsored by Republican Scott Garrett of New Jersey, could be different. The proposed legislation denies the president any national security waiver. It would force the administration to take immediate action to move the embassy.

“It is long past due for our government to finally and unequivocally recognize Israel’s historical capital both in word and deed,” Cruz said in a statement after introducing his bill.

But Daniel Seidemann, an American-born Israeli attorney who is an expert on Israeli-Palestinian relations in Jerusalem, derided this push as one “detached from the urban and geopolitical realities on the ground in Jerusalem.” Such a step, he warned, would cost America its status as a fair broker in the region and as a legitimate diplomatic player.

“What would it look like if the U.S. held its annual Fourth of July celebration at its embassy in Jerusalem and no one came?” he asked.

These complicating factors have led many supporters of Israel to try and steer clear, as much as possible, of actively supporting moves to change America’s posture toward Jerusalem.

“We support moving the embassy to Jerusalem, but we have not yet taken a position on this legislation,” a source at the American Israel Public Affairs Committee told the Forward.

“Clearly, the embassy ought to be in Jerusalem,” said Jason Isaacson, associate executive director for policy at the American Jewish Committee. “The question is, what impact will it have on foreign relations and on the peace process that is currently dormant but we all hope to see it revived.”

But Morton Klein, national president of the Zionist Organization of America, argued against the larger groups’ neutral stance. Moving the American embassy to Jerusalem is exactly the type of message the United States should be sending the Palestinians, to make them aware their actions come with a price, he said. The ZOA, he stressed, “strongly supports” the bill and calls on other Jewish groups to do the same. “It is time for AIPAC, AJC and ADL to publicly endorse it,” he said.

Though Republicans control both chambers, it is not clear whether the party’s congressional leaders will seek to advance legislation that would raise tensions with the White House on an issue that Jewish groups themselves are not, for the most part, pushing. But the embassy relocation is a known priority for at least important component of the GOP’s base: billionaire casino mogul Sheldon Adelson, who was, with his family, the party’s largest single donor in the 2012 election cycle. Cruz himself is seen as a potential GOP presidential candidate.

The neutral position of the major Jewish groups, one pro-Israel lobbyist explained, stems not just from fear of getting embroiled in a partisan debate. They are also focused on lining up their priorities so as not to waste political capital on a relatively marginal and possibly losing battle, he said. The leading communal priorities now, this lobbyist explained, are legislative efforts to tighten sanctions against Iran and moves to punish the P.A. for its push to prosecute Israel in the International Criminal Court.

“Adding other factors could only complicate things,” the lobbyist said. “The embassy should move to Jerusalem, but should this happen tomorrow or the day after tomorrow? This makes less of a difference.”

The debate echoes the discussion held back in 1995, when a Republican-controlled Congress, strongly supported by the pro-Israel lobby, pushed forward the legislation now in place, with its waiver provision. Clinton strongly opposed the move, as did Israel’s government, led by Prime Minister Yitzhak Rabin, who expressed his unease with the move. Rabin feared it would succeed only in setting back peace talks that were then very active.

The Supreme Court’s passport case is different. Here, free from political controversy and from the ability or need to lobby for or against it, pro-Israel advocates find it easier to take sides. Still, this judicial contest remains largely a battle of one family and its close supporters to register Israel as the birthplace of those born in Jerusalem. The case of 12-year-old Menachem Zivotofsky, an American citizen who was born in Jerusalem, was heard by the Supreme Court last November. A decision is expected in the coming months.

Young Menachem’s case began when he was born, and the State Department, viewing the status of Jerusalem as an issue in dispute between Israelis and Palestinians, refused his parents’ request to register “Israel” as his birthplace, putting down instead only the name of the city, Jerusalem.

In the oral arguments before the Supreme Court last November, Zivotofsky’s lawyers argued that by allowing him to register Israel as his birthplace, the United States would be accommodating a personal choice, not making a policy statement. They note that in no other place in the world does an American citizen face any problems with registering his or her country of birth.

The Solicitor General countered that by accepting the Jewish preteen’s appeal, the judicial branch would be infringing on the administration’s constitutionally protected right to lead America’s foreign policy.

Supreme Court watchers noted that justices seemed split on the case and carefully refrained from speculating on the outcome. A ruling in favor of Zivotofsky would be seen as a blow to the administration, but its impact on actual policy would be minimal.