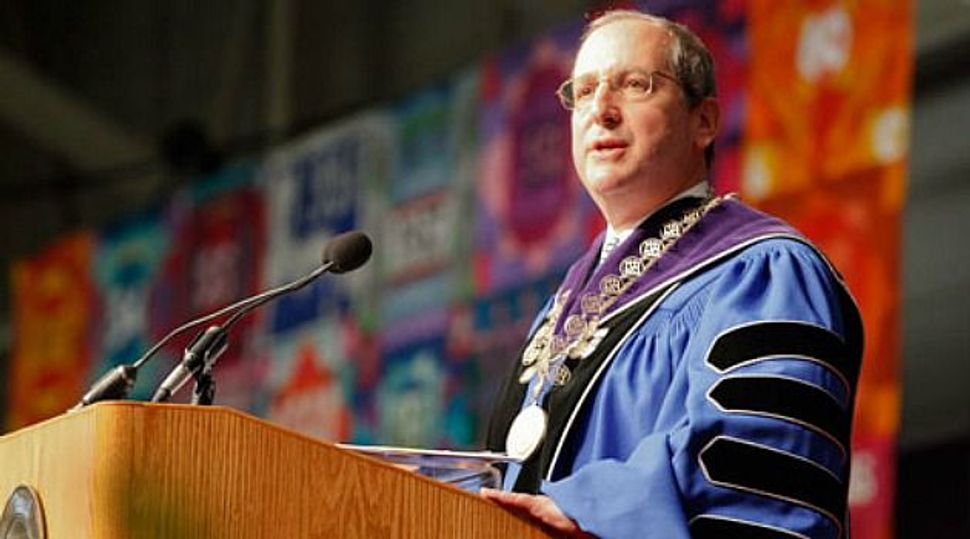 Image by brandeis u.

(JTA) — For all the controversies Brandeis University President Frederick Lawrence endured over the past few months, the failures that ultimately doomed his tenure were more fundamental, insiders say: His fundraising just wasn’t good enough and his administrative track record was wanting.

Last Friday, Lawrence announced that this would be his last semester at the Jewish-sponsored, nonsectarian university in Waltham, Mass., outside of Boston.

“After careful consideration, and in close consultation with the Board of Trustees, I have decided to step down as President at the end of this, my fifth academic year,” Lawrence wrote in his announcement. “For the time being, I am looking forward to returning to full-time scholarship and teaching as a senior research scholar at Yale Law School.”

Although Lawrence was popular with many students and helped stabilize Brandeis’ finances in the wake of the 2008 financial crisis, the austerity measures he imposed even as his own compensation rose made him unpopular among faculty members. All the while, his fundraising failed to measure up to his longtime predecessor, he was seen as having made several administrative missteps and he stumbled through numerous controversies over the past year.

Brandeis named Lisa Lynch, a Brandeis provost and the former dean of the Heller School for Social Policy and Management, interim president as the university embarks on a search for its next leader.

He arrived at a challenging time for the small liberal arts university founded by Jews in 1948 as an alternative to Ivy League universities with Jewish quotas. Brandeis was still trying to recover from the 2008 financial crisis, with the Madoff scheme having hurt some of its large donors, and the university’s endowment was still down from its pre-crisis peak of about $712 million.

Two years earlier, the university had come under withering criticism for a tentative plan by trustees to sell artworks from Brandeis’ Rose Art Museum to finance the university’s operation. Eventually the plan was scrapped, and not long afterward Jehuda Reinharz, who had been president since 1994, announced he was leaving.

When Lawrence came in, he started by limiting faculty raises and enforcing cutbacks in an effort to put the school on better financial footing. And he is credited with helping earn Brandeis an A1 rating from Moody’s Investors Service in July 2013.

Lawrence generally was well liked by students, frequently showing up at student events and programs. He often would attend Brandeis’ large Shabbat dinners, sometimes delivering the dvar Torah, and he even led Kol Nidre services on Yom Kippur. An estimated 50-60 percent of Brandeis’ 3,600 undergraduates are Jewish.

“There has never been a president of Brandeis so well liked by the students as Fred Lawrence,” said Jonathan Sarna, a professor of American Jewish history who has been at Brandeis for 25 years.

“He saw the role of the college president in a more traditional, even old-fashioned way: as a role model for students, who speaks to them regularly, who comes to their programs,” Sarna said. “It’s sad in some ways that the modern university president is not judged on that standard but rather on the basis of very different standards.”

Namely, fundraising. Lawrence brought in an average of about $37 million in donations annually, according to audited financial statements by KPMG — significantly less than his immediate predecessor. Reinharz brought in roughly twice that amount, according to The Boston Globe.

“He tried to be different from Jehuda Reinharz and not rely in the same way on Jewish donors, and it has not been successful and it doesn’t seem like it has any prospect of being successful,” one insider told JTA on condition of anonymity.

Lawrence appointed a provost, Steven Goldstein, who didn’t work out, lasting less than three years, and a chief operating officer whom some faculty decried as ruthless. And while faculty were subject to caps on salary increases, Lawrence’s compensation soared from about $589,000 in 2010 to $878,572 in 2013, the last year for which data is publicly available.

Then there were the controversies — several of them over the past year.

Last spring, the university announced that it would award an honorary degree to the Somali-born feminist activist Ayaan Hirsi Ali, but backtracked when critics noted her stridently anti-Muslim statements. Some faulted Lawrence twice: first for offering the honorary degree, then for quickly caving to critics. It was a mistake, at least one observer noted, that could have been avoided by spending a few minutes doing a Google search to better vet Hirsi Ali.

Last fall, the university came under investigation for violating a student’s civil rights in a sexual assault case.

Then six weeks ago, Brandeis again made national news when a student at the school, Daniel Mael, came under fire for publicizing another student’s tweets that seemingly condoned the Dec. 20 shooting deaths of New York police officers Rafael Ramos and Wenjian Liu.

Ultimately, insiders say, the controversies fed into what was Lawrence’s central failure: lack of fundraising prowess. The university’s largely Jewish donor base was put off by Lawrence’s incapacity to respond more forcefully to some of these controversies and articulate Brandeis’ values unabashedly.

“Staff morale has never been so low during my now 51 years at Brandeis,” Brandeis sociology professor Gordie Fellman told JTA.

“Lawrence is a decent guy with a certain sweetness about him, but he made some major boo-boos as president, some regarding Israel, others regarding staffing,” Fellman said in an email. “Fred has also taken some peculiar stands on civility and free speech that have bothered many faculty. He really doesn’t understand Brandeis or liberal arts education, from what I can tell.”

Several members of the board of trustees contacted by JTA either declined to comment or did not return phone calls. Lawrence declined to be interviewed for this story, and a spokesman for the university did not respond by deadline to several emailed questions.

“I am tremendously proud of the ways Brandeis has grown and thrived during my time as president,” Lawrence said in his resignation announcement.

“Applications have surged to an all-time high, our endowment has grown to its highest point ever, and we have made significant progress in balancing the University’s budget,” he wrote. “Every day our community exemplifies Brandeis’ legacy of social justice and repairing the world.”